West Bengal BJP chief Dilip Ghosh said the people in the state are inspired by the leadership and development work done by Prime Minister Narendra Modi. 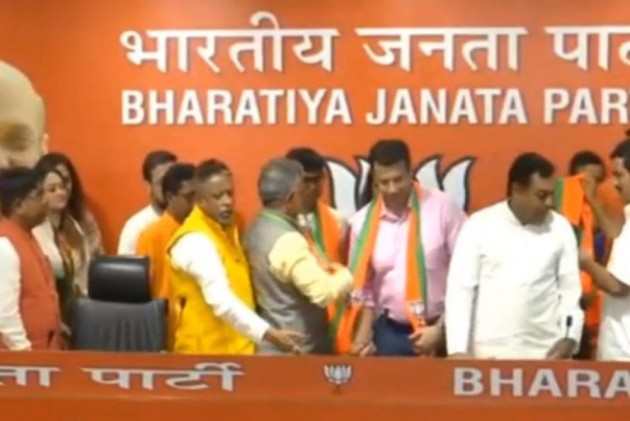 Several Bengali actors, including Parno Mittra, joined the BJP on Thursday in presence of party leaders in the national capital.

Welcoming the 12 actors into the party fold, West Bengal BJP chief Dilip Ghosh said the people in the state are inspired by the leadership and development work done by Prime Minister Narendra Modi.

Rishi Kaushik, Kanchana Moitra, Rupanjana Mitra and Biswajit Ganguly are among the film and TV stars who joined the BJP at its headquarters here.

Ghosh alleged that many councillors who had quit the TMC to join the BJP are being harassed, adding that 17 municipal council members from Darjeeling have not been able to visit their homes after joining his party.

Some others have been "forced" to rejoin the TMC, he claimed.

Ghosh said it has become "risky" for people to join the BJP.

This is why the BJP organises joining ceremonies for personalities from West Bengal outside the state, he said, adding these actors deserve credit for their "courage".

People belonging to different walks of life from West Bengal, including leaders from the TMC, CPI(M) and Congress, have been joining the BJP after the Lok Sabha elections were announced in March this year.

The BJP is eyeing to wrest power from the Trinamool Congress in the state and has emerged as the main opponent of the Mamata Banerjee-led party.

Several state leaders, including MLAs, from other parties have also joined the BJP since its impressive show in the recent general elections. The saffron party won 18 out of the 42 Lok Sabha seats in West Bengal.