India And The Golden Age Of Islam

Take what the Europeans came to call the "Arab numerals" which replaced the cumbersome Roman numerals. The Arabs call them Hindsa (Indian numerals) giving credit where it is due... 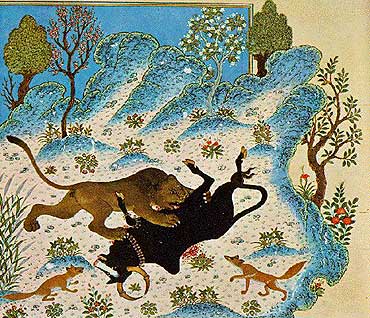 History and legend both describe the first 400 years of Abbasid rule, roughly from 750 to 1150,  as the Golden Age of Islam. Great military victories, booming international trade and agriculture leading to all round prosperity and luxurious living of the era gave rise to fables like Thousand and One Nights and prompted historian Khatib to claim that "Baghdad has become a city with no peer throughout the world". But the real distinction of  the city which earned universal admiration was unrivalled intellectual activity in all fields: science, mathematics, technology, veterinary sciences, agronomy and literature including biography, history, and linguistics.

The royal patronage and munificence shown by the caliphs attracted academics and scientists of diverse nationalities, who pursued their studies in an environment free from religious prejudice and orthodoxy.  It is interesting to recall that the Royal Physician Bakhtishu, a Christian, when invited by Caliph Mansoor to embrace Islam, retorted that he preferred the company of his fathers, be they in heaven or hell. Thereafter Mansoor never broached the subject with him and the Bakhtishu family provided leading physicians and medical teachers for seven generations.

The general perception about the scientific achievements of this period is that the Arabs undertook translation of Greek texts that had not been accessible to academics after the Byzantine emperor Justinian had closed down the 900 year old Academy of Plato in 529 and unleashed persecution against the pagan (i.e. the non-Christian) scientists. This knowledge later travelled to Europe via Arabs, and Europe came to claim it to be its own heritage.

While history shows that translation of Greek works was taken up in the 9th century,  the Arabs had embarked upon the translation of Sanskrit texts from India much before that. According to Tabqatul Umam a delegation from India came to Baghdad in 771, some 250 years after the death of Aryabhatta. This delegation consisted of an astronomer called Kanaka, who carried with him a small library including a book titled Surya Siddhanta and works of Aryabhata and Brahamgupta.

According to the Arab historian al-Qifti, the caliph was amazed by the brilliance of these Indian texts. On his order, these works were translated into Arabic by Al-Fazari, who subsequently emerged as the first Arab astronomer of great repute. Over a period of time, this Arabic version gained fame under the title of Sindhind and became popular as a text of mathematics and astronomy all over the Muslim world including Spain from where it travelled to Europe and was translated into Latin in 1126. This work revolutionized the study of mathematics and sciences and replaced the cumbersome Roman numerals. It is interesting to note that while Europe has christened the new system as Arab numerals, the Arabs call them Hindsa (Indian numerals) giving credit where it is due.

The other important area influenced by Indian ethos and morality was adab, that is the embodiment of sensible counsel in the form of fables. The literary masterpiece of Ibn Muqaffa, Kalila wa Dimna, is based on the stories of Panchtantra and Mahabharata and is considered a classic of early Arabic prose. But it is not just that. We also find mention of translations of Varahmihir, Brihat Jatak, Krishna Avtar and Vishnu Puran in Kitabul Hind by Al Biruni, the brilliant historian who came with Mahmud of Ghazni's armies and stayed behind to live with Brahmins, learn Sanskrit and write his extraordinary work on India.

The long list of Sanskrit manuscripts that were translated into Arabic and catalogued in detail by Arab historian Ibn Nadeem in his classic Fehrist (Bibliographical index) is an of acknowledgement of the contribution that Indian sciences made in building the Golden Age of Islam.