India All The Way

Extracting revenge for the loss at Ahmedabad, the hosts strike with a vengeance to deliver an all-round display and crush the islanders by seven wickets. 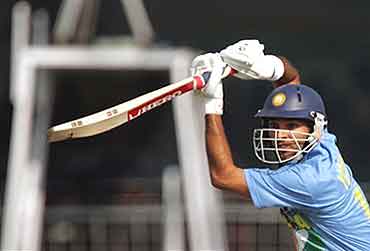 Yuvraj Singh batted his way out of a form slump to score a scintillating half century as India returned to winning ways with a vengeance, thrashing Sri Lanka by seven wickets in the sixth one-dayer today.

After bundling out the visitors for a modest 196 in 42.5 overs with a disciplined bowling performance, Yuvraj stole the limelight with a 67-ball unbeaten 79 to steer the Indians home with 15.1 overs to spare and give the hosts a 5-1 lead in the seven-match series.

It was yet another commendable performance by the rejuvinated Indians as they thoroughly outplayed the islanders in all departments of the game, rendering the contest into a lop-sided affair.

While Yuvraj emerged as the batting hero by notching up his 19th ODI half century, young paceman Rudra Pratap Singh also had his moment of glory as he returned with career-best figures of 4-35 to wreck the Sri Lankan innings on a good track at the Madhavrao Scindia Stadium.

Mohammad Kaif, returning to the team after sitting out the first five matches because of an injury, showed no signs of rustiness as he slammed an unbeaten 38 while Gautam Gambhir (28), Virender Sehwag (22) and Sachin Tendulkar (19) could not manage to convert the starts into big knocks.

The two teams will now travel to Baroda for the last match of the series to be held on Saturday.

Yuvraj, having aggregated only 45 in four innings so far in the series, answered his critics in his inimitable style cracking an unbeaten 79 that contained three sixes and nine fours. He added 105 runs with Kaif for the fourth wicket.

The Lankan batting, which had fired on full cylinders in the previous match, bombed. Only three batsmen went past 20 and more than seven overs of their allotted quota went unutilised.

The visitors' innings revolved around a defiant half-century from Tillekaratne Dilshan. The middle-order batsman, man of the match in Sri Lanka's five-wicket win at Ahmedabad, stroked his way to a fine 59 from only 63 balls with nine fours.

Upul Chandana hit a valuable 30 and added 29 runs for the eighth wicket with Dilshan.

It was a collective bowling performance from the hosts who were also brilliant in the outfield.

Gambhir once again helped India to get off the starting blocks quickly with a 27-ball 28.

And although Tendulkar (19) and Sehwag (22) failed to capitalise on the good start, Yuvraj and Kaif carried through the momentum to take the team past the winning post comfortably. 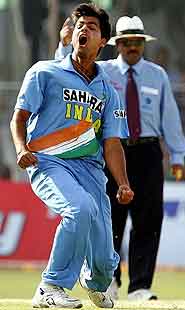 The sudden drop in the Lankan batting form was inexplicable. Although there was a hint of uneven bounce in the first hour, the pitch that resembled a shiny marble soon evened out.

Its slow and placid nature took all sting out of the bowling, but the batsmen did not last long enough for Sri Lanka to take advantage of the track.

When the Lankans came on to bowl, they struggled to check the Indian scoring rate. The absence of their star off-spinner Muttiah Muralitharan added to their woes. The Indians experimented again with Gambhir walking out with Tendulkar to open the innings.

Sehwag has played 110 of his 130 one-day innings as an opener and scored 90 per cent of his career runs at that position. All his seven hundreds came at the top of the order whereas in other positions he has averaged 16.10 for 322 runs with one half century.

Gambhir, rewarded for his century in Ahmedabad, went with his natural shotmaking instinct to provide a brisk start.

He made his intentions clear with an uppish square drive off Chaminda Vaas in the first over and then collected two fours off successive balls from Dilhara Fernando.

Fernando, however, had the last laugh when the left-hander played on to his stumps. Gambhir's 28 came off 27 balls with six fours.

Tendulkar found the fence for the first time with a rasping cut off Vaas in the seventh over. In the bowler's next over, the master batsman stamped his class with an off-drive and an on-drive, piercing the infield through his timing.

But then he mistimed an on-drive off Fernando in the following over for a simple catch to mid-on, his 19 coming off 30 balls and including three fours.

But there was no let up in scoring as Sehwag took the baton and sprinted at frenetic pace. His first boundary was a Nataraja pull shot to backward square leg off Fernando which was followed by two scorchers through the point region off Farveez Maharoof.

Sehwag's belligerence, however, came to a premature end when he tried to turn Upul Chandana's legspin to the on-side only managing a leading edge to short extra-cover. His run-a-ball 22 contained four fours.

Kaif, playing his first match in five weeks, continued to press the accelerator for India with a cover drive off Fernando.

But Yuvraj soon took charge as he played his strokes fluently.

He clubbed Fernando for a four and a six in an over as India galloped towards victory.

The Punjab batsman brought up the win with a straight driven boundary of Sanath Jayasuriya.

Earlier, Jayasuriya once again failed to deliver as he played outside the line to S Sreesanth for a thin inside edge to the wicketkeeper for 19.

But off the 17 balls he faced, the veteran showed glimpses of his old form, striking four fours via his favourite shots, slash to third man and square drives through the off-side.

Upul Tharanga was snared by a rising delivery from Rudra Pratap Singh for 28.

Kumara Sangakkara (9) failed to fire, edging a simple catch to mid-on off Irfan Pathan. Mahela Jayawardene (14) and Marvan Atapattu (9) fell in the space of six balls, leaving the score at 83 for five.