MK Stalin is now the working president of the DMK and looks set to assume its reins. 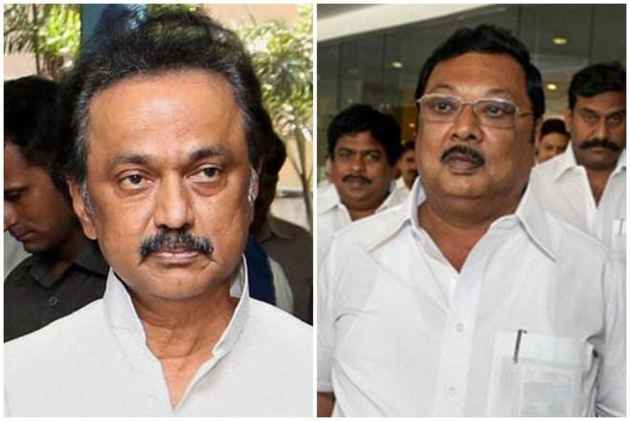 The DMK on Monday appeared headed for a fresh succession war days after the death of its patriarch M Karunanidhi, with his estranged son and former Union minister MK Azhagiri claiming all loyal party workers are with him.

Karunanidhi had expelled Azhagiri and his supporters from the party in 2014 at the height of his fight with his younger brother MK Stalin over establishing supremacy in Tamil Nadu's main opposition party.

Stalin is now the working president of the DMK and looks set to assume its reins.

Azhagiri on Monday paid tributes to his father at his grave on the Marina Beach and made his intentions clear when he claimed all loyal party workers were with him.

"All the true and loyal supporters of Thalaivar, Kalaignar (The leader and the artiste, sobriquets used for Karunanidhi) are with me, they are supporting me...time will provide the answer," Azhagiri , who has been leading a life away from the media glare in Madurai since his expulsion, told reporters.

He said he prayed at his father's grave over his "grievances and frustration" about which the media would not know now.

When asked if those related to the family or the party, Azhagiri said it was the latter.

The development came a day ahead of the DMK's executive committee meeting that has been ostensibly convened to condole Karunanidhi's death but where a decision may be taken about summoning the party's general council for putting its seal of approval on Stalin's elevation.

When asked to comment on Tuesday's meeting, Azhagiri said," I am not in the DMK. Do not ask me about it."

"I don't know," was his terse reply to a question about whether he would be back in the party again. Azhagiri and Stalin have been at loggerheads for years over who will inherit Karunanidhi's legacy.

Before his expulsion, a mercurial Azhagiri had famously questioned if the DMK was a "mutt" where the pontiff could anoint his successor, an apparent reference to their father.

The Karunanidhi family had presented a united face when the DMK stalwart was fighting for life at a city hospital. Azhagiri was present at the hospital and was seen at his father's funeral.

However, close watchers of Tamil Nadu politics expected him to flex his political muscle once Karunanidhi was gone.

The former Union minister wields considerable influence in the southern districts of Tamil Nadu. He was the party's secretary for these districts before his expulsion.

Though the sibling rivalry for control of levers of power in the organisation was present for a long time, it came out in the open in January 2014 when Karunanidhi said Azhagiri had talked about the death of Stalin in three months, a charge the Madurai strongman dismissed as baseless.

"He (Azhagiri ) has some unknown hatred against Stalin. Azhagiri even said Stalin would die in three months. No father can tolerate such words against a son. As the party chief, I had to tolerate them," Karunanidhi had said and expelled Azhagiri and his supporters from the party.

Stalin was a clear favourite of Karunanidhi as he diligently worked his way up the DMK hierarchy, holding party posts since his youth. He was the party's treasurer and youth wing secretry for three decades.

Azhagiri , on the other hand, lay in the background. It was only in 2009, after the Tirumangalam bypoll victory of the DMK in Madurai, that Alagiri was named the party's south zone organising secretary. He faced allegations of ditributing cash to voters during the bypoll.

When Stalin embarked on an aggressive campaign for the 2016 Assembly election with his voter outreach programme "Namakku Naame Vidiyal Meetpu Payanam" (We for ourselves, journey to retrieve the dawn), Alagiri called it a "comedy show."

Recently, Azhagiri asserted true party workers were only with him and taunted Stalin and his supporters.

He had even questioned Stalin's leadership in the wake of the DMK's drubbing in last year's RK Nagar assembly bypoll in Chennai where the party candidate forfeited his deposit against winner AMMK's TTV Dhinakaran.

Azhagiri had claimed after the defeat that the DMK cannot win any election under Stalin.

"Not just the RK Nagar bypoll, the DMK will not henceforth win any election. There is no chance of that as long as this working president (Stalin) is there," he had said.