It is critical for the country that the IAEA Safeguards Agreement is discussed with full transparency and not kept secret. Why is the Manmohan Singh government keeping the draft of the IAEA Agreement secret from the people of India? 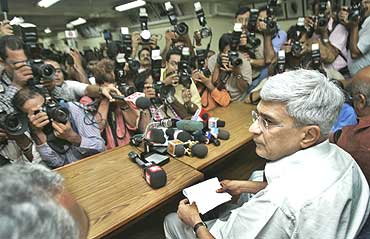 The UPA Government has refused to submit the draft text of the IAEA Safeguards Agreement to the UPA-Left committee. As the experience of the 123 agreement has shown, the claims of the Government made prior to the negotiations are not borne out by the actual text. Thus the full text of the agreement is necessary to clarify the major issues involved.

The first major issue relates to the possibility of the US terminating civilian nuclear cooperation with India for any reason in the future. India already had such an experience, when the US suspended nuclear fuel supplies to the Tarapur Atomic Power Station in 1983, reneging upon a thirty year contract signed in 1963. In the present case, the IAEA safeguards would continue even in such a scenario, since they are applicable in perpetuity to the entire civilian nuclear energy sector. The text of the 123 agreement has very ambiguous references to India taking "corrective measures" if nuclear fuel supplies from abroad are discontinued. Therefore, the text of the IAEA Safeguards Agreement needs to be made available to see whether any corrective action is possible on India’s part, if the US discontinues the fuel supplies.

Secondly, the 123 agreement claimed that the US would join India in negotiating with the IAEA an "India-specific fuel supply agreement". However, it is well-known that the IAEA is not at all concerned with fuel supply but only with the imposition of safeguards on nuclear equipment and material. Therefore, it is important to know how the IAEA Safeguards Agreement provides for the fuel supply assurances in the case of India as claimed in the 123 agreement.

The key concerns expressed by the Left Parties regarding the IAEA Safeguards Agreement and which have not been addressed by the UPA are the following:

Once the text of the Safeguards Agreement is approved by the IAEA Board of Governors, which is what the UPA Government seeks to do now, the subsequent steps require no participation at all by the Government of India. It is the US Government that takes the next steps – moving the NSG countries for the waiver and then placing the 123 Agreement before the US Congress. Therefore, it is critical for the country that the IAEA Safeguards Agreement is discussed with full transparency and not kept secret.

Why is the Manmohan Singh government keeping the draft of the IAEA Agreement secret from the people of India?

'That Time Has Come'