'I Will Meet You Again' 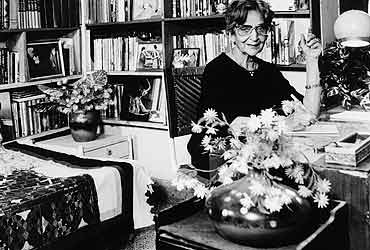 More stories from Imroze
View All

I will meet you again
Where? How? I don't know
Perhaps as a figure
Of your imagination
I will appear on your canvas
Or perhaps on your canvas
Appearing as a mysterious line
Quietly
I will keep staring at you.

Amrita Pritam who soared high into the literary skies, who dived deep into the depths of the seas of sensitivity, is now physically confined to a mere bed. Day and night, morning and evening, Amrita is forced into staying in that bed in a small room.

This accident happened in February 2002. She slipped and fell down in the bathroom. The wound was deep and the pelvis bone was broken. We immediately took her to the hospital. At this age, the broken bone caused extreme pain. The operation was supposed to take two hours, but the doctors struggled for five to complete it. Amrita returned home. We hoped, and so did Amrita, that perhaps she would be able to begin walking once again. But the foot started acting up again, the pain returned, and since then she has been on the bed.

She is 85 now and is not in a condition to be operated upon again. The doctors have given up. Her pulled and stretched muscles do not allow her to even stand and sit, leave alone walk. But it isn't as if she has accepted defeat. She has life inside her, she is alive. Suji Upma, Glucose liquid and, sometimes, Sufi writings of Bulleh Shah and Shah Hussain are part of her daily routine. 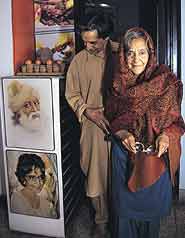 I have lived with Amrita for the last 40 years and never have I felt that she wrote something for the sake of it. She would write only when her heart told her to write. She's never had, and doesn't have now, the hunger to write or be published. She has not written anything in the last two years. Her health doesn't allow it now. Amrita and I used to bring out a Punjabi periodical called Nagmani. This was being published since 1966, but because of her state of health, it has not been published since April 2002.

What hurts is that in this period no contemporary writer or artist has visited, nor did anyone feel the need to ask after her. I think this perhaps is a universal trait. Though, a few young writers did visit. But we are not affected by this. For us, readers are the most special. Her readers even today read and recite her work. I think she is the only Punjabi woman writer to be making a living out of the royalties from her writings.

I recall an incident. Amrita had been awarded the Sahitya Akademi prize for one of her creations. When this was announced, someone called Amrita up to tell her about this honour. Instead of being happy, Amrita began crying after putting down the phone. The reason was that she had written that poem for the poet Sahir Ludhyanavi and Sahir did not know Gurumukhi. [Elsewhere, Amrita Pritam wrote movingly about how she would ride pillion on Imroze's scooter, while she would trace Sahir's name on his back with her fingertips - Ed.] Amrita felt that if the one she wrote it for could not read it, the honour was meaningless. 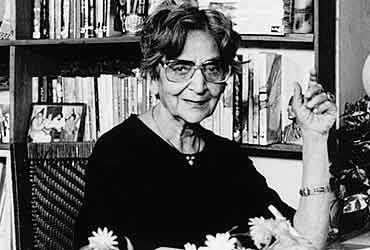 Recently, Amrita was awarded the Padma Vibhushan. She was not in a state to go and receive the award. The ceremony was held, people were honoured, but no one remembered Amrita, nor was anything given. It was only four-five days later, when some newspapers made it into an issue that the government woke up to it. One of the secretaries to the government came to the house that very evening and handed over the certificate of honour and two Padma Vibhushan medals. The Prime Minister himself sent a bouquet of flowers. This Prime Minister knows Amrita well, as Amrita herself has been a nominated member of the Rajya Sabha. The Prime Minister's Office called as well, saying that the PM wished to speak to Amrita, but she was not in a state that she could talk. Then they asked if we needed anything, but we did not ask for anything. We do not want anything. Our expenditure is within our means. Other literary figures who earn two rupees, end up spending 10 - which is why they are not happy.

Whatever the honour or award, it has no meaning for Amrita. If she wrote well and people liked what she wrote, that is the highest honour. Amrita has never written to win an award. To write for prizes and to write from the heart are two different things. Only those are affected by getting or not getting an award who lobby for them, those who are ambitious and write aiming for awards. We have never aspired for awards, nor do we do so now. The body has become weak, old age has taken its toll and then there is this ailment. Now Amrita has also become hard of hearing. When Amrita goes to sleep, it is only then that I rest for an hour or two. My daughter-in-law stays with her then, but Amrita wants me alone to sit by her side, all the time, every moment. She used to drink a lot of tea earlier, but perhaps she is losing her taste too now, it seems. She doesn't even like tea anymore. 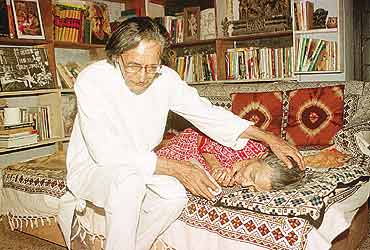 Because of all these troubles, sometimes Amrita sinks into a depression. A couple of times she went to the extent of asking me to get her cyanide. I explained to her that the terrorists have taken cyanide away. Where do you get real cyanide now? And then, in all the countries of the world, suicide is illegal. It is strange, no body has made the law favouring euthanasia: if somebody wants to go, their passage should be eased.

Of her later poems, there is one she wrote for me: I Will Meet You Again. My brushes and canvases are dry. Painting is absolutely at a halt for the last two years. In any case, I do not paint for sale, but only to satisfy my heart. And then Amrita alone is my painting - nowadays, I am busy giving it finishing touches.

[Eminent artist Imroze, who stayed with Amrita Pritam for the last 41 years of her life - every moment, he says - spoke to Panini Anand for this piece which originally appeared in Hindi in Outlook Saptahik dated 2 August, 2004 - this is a hurried translation by Sundeep Dougal.]

Online Writings:
Visions of Divinity - Some of her dreams and the poems they inspired
Stench of Kerosene - Short story from the Land of five rivers, translated by Khushwant Singh
Sahiban in Exile - Translated by Nirupama Dutt
Wild Flower - Short story in the Little Magazine