'I Do What I Do Because I Have To'

'I do what I do, and write what I write, without calculating what is worth what and so on. Fortunately, I am not a banker or an accountant. I feel that there is a time when a political statement needs to be made and I make it.' The celebrated author 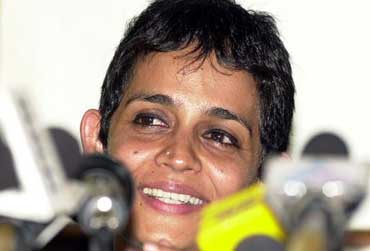 ZNet: Can you tell ZNet, please, what your new book is about? What is it trying to communicate?

Arundhati Roy: War Talk is about the war, resistance, democracy, corporate globalization, empire, racism, religious fascism, the media, and how all these things are connected. I don't mean connected in some loose way, but in a very tight formation.

For example, in "War Talk" I look at how the massacre of Muslims in Gujarat could not have happened last year without the demonization of Muslims in America after September 11.

It's not just that the radioactive waste from the wreckage of the World Trade Center dumped in Gujarat, but also a toxic ideology that reached a critical mass in the "war on terrorism" and the rabid hatred of the Muslim world we see being driven by the Bush administration. Anti-Muslim hatred has been given sanction and legitimized.

I am trying to make the point that empire expands either by breaking a country in the way Argentina was broken or by the way Afghanistan and Iraq were broken -- with a checkbook or a cruise missile. But the motor that is propelling this process is the same. Hell hath no fury like a market scorned.

Can you tell ZNet something about writing the book? Where does the content come from? What went into making the book what it is?

The essays were written in a very precise moments, as interventions in response to the world. The first essay, for example, was written when there was a nuclear standoff between India and Pakistan in June 2002. I wrote this piece initially as a radio commentary for the BBC.

All the Westerners drained out of India, like a film running backwards... And then all the journalists were pouring in, ghoulishly asking me why I wouldn't leave New Delhi.

I felt that the threat was quite real, and it seemed like in the global village, for India and Pakistan to be fighting was like having a war between the Dalits and the Adivasis, while the Zamindars, the landlords, kept selling weapons to both sides.

As far as the powers of the world were concerned, it was insignificant what happened to any of us.

The essay Democracy: Who Is She When She's at Home? was written as a response to the fascist pogrom which led to the murder of 2,00 people on the streets of Gujarat last year. More than 150,000 Muslims were driven from their homes.

There is a mass of evidence to show that the government, the police, and the civil administration were involved in the pogrom. Yet nothing has been done to the perpetrators of this violence. Instead, they were allowed to stand for state elections in Gujarat, and won them.

This absolutely toxic cocktail of fascism and democracy led a lot of us to ask very serious questions about what kind of world we are heading toward. The fact that the quote unquote "international community" -- which is supposedly so concerned about human rights in Iraq -- was strangely subdued about this massacre, was significant.

In India, the markets are open. And mass murder is only a subject for an opinion poll...

My talk Come September, which is included in War Talk, is about remembering September 11. Not just September 11, 2001, but September 11, 1973, when the CIA-backed coup in Chile installed General Pinochet. September 11, 1922, when Britain marked the imperial mandate on Palestine. And September 11, 1990, when George Bush the First announced to the US Congress his intention to go to war against Iraq.

This talk, which I gave in New Mexico, was the first time after September 11 that I had spoken to a U.S. audience, and I was overwhelmed by the political anguish among so many ordinary people here. It made it so clear to me that this crude, racist "war on terror" has evokes a crude and racist response abroad, in falsely identifying all American people with Bush, which is once again borne by people who are fighting within America and deserve to really be welcomed as our allies, instead of reviled as our our enemies. To allow the U.S. government and its cohorts to decide what is American and what is not, and who is Anti-American and who is not, is a foolish mistake.

The last essay in the collection is the talk that I gave at the closing plenary of the World Social Forum in Porto Alegre, Brazil, this year. It took place at the end of January, when those of us who were against the war in Iraq were torn between admitting to ourselves that the war was inevitable and hoping that the massive public display of public protest, which later culminated in the brilliant February 15 demonstrations around the globe, would divert it.

The resistance to the project of corporate globalization and Empire cannot be seen in simple terms -- as if we simply come out on the streets, they will end the war. It is part of the process of stripping down the machine that powers Empire an exposing it.

Of course, between then and now, Iraq has been brutally and illegally invaded and occupied. Very few of us were surprised were surprised by this. But the truth is that there is a growing fury in the world, and it will find utterance.

What are your hopes for War Talk? What do you hope it will contribute or achieve, politically? Given the effort and aspirations you have for the book, what will you deem to be a success? What would leave you happy about the whole undertaking? What would leave you wondering if it was worth all the time and effort?

I do what I do, and write what I write, without calculating what is worth what and so on. Fortunately, I am not a banker or an accountant. I do what I do because I have to. I feel that there is a time when a political statement needs to be made and I make it.

If all of us were busy calculating the worth of what we do, we'd probably do nothing, because you can't gauge your effectiveness that easily. Everything you do is just one of a million things that a million people are doing.