'I Do Not See Any Modi Wave'

'It is just a creation of the media. But the poll results will prove the media wrong as you will see the emergence of a third front' 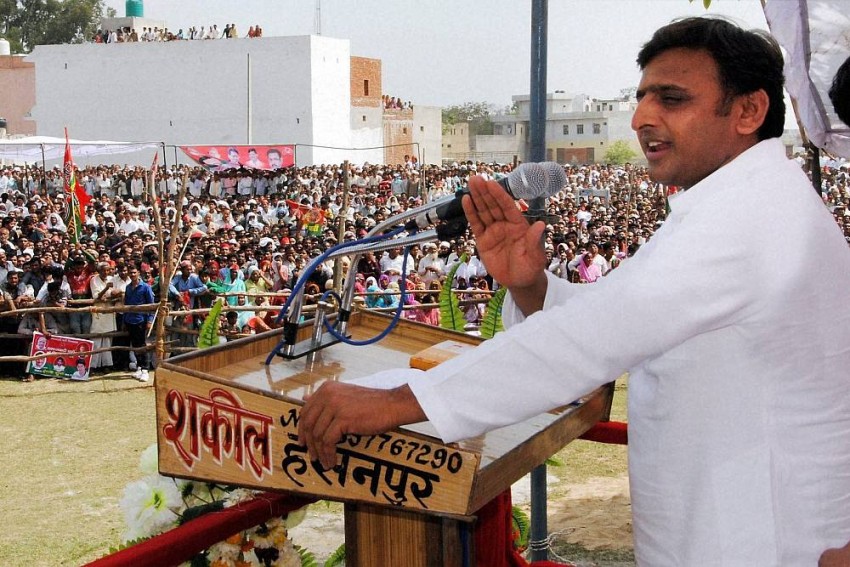 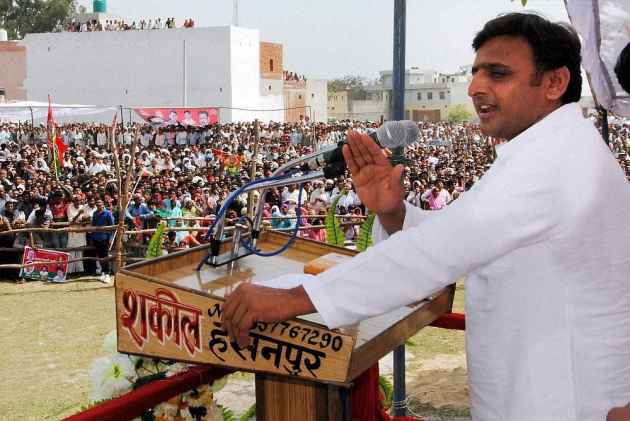 Much like his father Samajwadi Party supremo Mulayam Singh Yadav, Uttar Pradesh chief minister Akhilesh Yadav too does not see the writing on the wall. Apparently in complete denial mode to accept the visible reality of a Narendra Modi juggernaut invading Uttar Pradesh, Akhilesh is still exuding confidence that the next government in New Delhi will be formed by none other than the third front.

Even in the event of inevitability of a Modi government , Akhilesh foresees no threat to his government , notwithstanding repeated veiled indications given by BJP pointsman Amit Shah about dislodging the two-year old SP government , which enjoys a clear majority to run full steam for the next three years.

Akhilesh refuses to believe that Shah, who is keeping a hawk’s eye on BJP’s affairs in the country’s most populous state, would even dare to attempt a coup on him. “Unki himmat hai ki ve hum logon se panga lenge ; kya unhe maloom nahin hai ki Mulayam Singh Yadav ke saath panga lene se unka kya hashar hoga” (Can he dare to take ‘panga’ with us ; don’t they know what would happen to them if they provoke a leader like Mulayam Singh Yadav?), Akhilesh told Outlook ion an exclusive interview.

In a scenario where everyone seems to believe that there is a Modi wave, where does the Samajwadi Party stand ?

I do not see any Modi wave. It is just a creation of the media. But the poll results will prove the media wrong as you will see the emergence of a third front.

Is that your wishful thinking ? After all your there has been so much talk about you father getting the top job in the event of a third front coming to power?

You will see my prediction coming true on May 16 . Let me tell you that Samajwadi Party’s poll graph has been rising with every phase of the election. But the decision on prime minister will be taken by the parties who provide an alternative government . You have seen how 11 parties have already held a joint meeting . When the time comes, more parties will join in and SP is bound to play a key role in the formation of such a government.

What do you see as your party’s USP which can beat the Modi surge?

Well, our main strength comes from our secular credentials. And combined with that we have our development agenda , which makes us a far more deadly combination than the much hyped Gujarat model . No matter how much Narendra Modi might be bragging about his Gujarat model, the ultimate ground reality , which nobody can deny, is that he has only been pursuing a hardcore communal agenda.

But that was never reflected in any of his rallies , where he systematically shunned any mention of a single Hindutva related issue.

That is just a façade and only the gullible will believe that he is not pursuing a communal agenda. His is simply a Hindu model which has no room for any other community . Haven’t you heard slogans like ‘Har-Har Modi’ which reflect the communal megalomaniac in him. And mind you it is we— the most potent secular force— which is going to stop Modi’s march. You will see that happening soon.

Why is your secularism now often construed by many as pro-Muslim communalism which is as bad as pro-Hindu communalism ?

That is a baseless propaganda by anti secular forces who want to polarize the election on religious lines.

That is again a false projection by the media, which fails to see what the Samajwadi party government has done for UP’s development. No one writes about 15 lakh Laptops given away by us to young students clearing Class XII in UP . You fail to see our secular and socialist thought behind the scheme , which is the only scheme of its kind in the country. We included every section of society as beneficiary thereby bringing an end to the digital divide among people of the state. Laptops have also helped to overcome the English phobia by which the state was bitten for years.

Perhaps you have forgotten how much has been written about your laptops . What happened to your promise to distribute 25 lakh Tablets to those passing Class X ?

We had to abandon that scheme because the technology upgradation in Tablets is extremely rapid , so Tablets given by us may not have been of long-term use.

I am giving UP a unique expressway connecting Lucknow to Agra which is being built with the government’s own resources . It is going to cost some Rs. 1600 crores.

But the state has pitched in because you failed to get any bidder under the PPP model , simply because this expressway was not considered economically viable. After all two parallel four-lane highways already exist along the route. The only difference is that this one proposes to cover Kannauj , your wife’s constituency.

That is incorrect. Bidders did not come because we were not willing to give them a land parcel which all private players wanted as a quid pro quo under the PPP model. But we were not ready for that as it would have led to compromising with the interest of famers whose land would have to be acquired for the purpose. I am not an enemy of farmers. In any case, the PPP model has failed all over the country.

What about your unique model ? Would it not involve acquisition of land now ? After all land is required for the expressway

No . The alignment we have drawn for the expressway will not involve acquisition of any cultivable land .

What else do you think you have done to claim that your development model is better than the Gujarat model ?

We are developing a Lion safari in Etawah, we are linking 16 district headquarters with high-class four-lane highways , we introduced Kanya Vidyadhan scheme to promote education among young girls . For the state capital here , we are going to build an international class cricket stadium , a world-class metro system, an IT City to be developed with the assistance of HCL and Infosys.

Have you seen the state of your existing highways ? Their condition is just pathetic and several major highways have more potholes than road.

Those must be the national highways for which the centre has been holding back funds.

What about the deteriorating power situation and the law and order ? Despite all your promises, the situation has worsened on both fronts .

We had inherited a poor power situation . Improvement in that sector is a long drawn process . We are on the job and you will see the result of our work over the coming months. As for the law and order situation, it is again a false propaganda by the opposition and distorted projection by the media.

The common feeling is that your party is likely to suffer losses in this Lok Sabha election ? What is your take on that ?

I have no worries . I am confident that my work as chief minister will pay . As such, SP will not clearly retain what he had in 2009 , but we will also make appreciable gains in several places where he had lost in 2009 by a thin margin.

Don’t you fear that the likes of Amit Shah , who are sitting over the helm of BJP affairs in UP , would try and topple your government by engineering mass defections or through other machinations ?

I have no such fear because I do not think these people will ever dare to take ‘panga’ with us. After all they ought to know what Samajwadi Party chief Mulayam Singh Yadav is made of and how he is capable of dealing with people who try to act funny.

Modi often tries to run you down by referring to your dynastic succession as ‘Baap-Bete ki sarkar.’

I don’t care. Yes, Netaji has made me chief minister. Modi keeps talking about his 56- inch chest . If he has a son, let him also make him CM.