'I Am Prepared For Any Sacrifice'

'I maintain what I said. Godse had a connection with the RSS and it was because of the atmosphere created by the RSS that the despicable act of Mahatama Gandhi's assassination was made possible'. 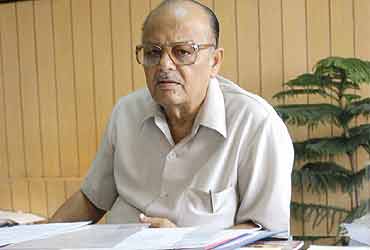 The RSS dismisses as baseless your charge published widely in the press that the RSS is responsible for the assassination of Mahatama Gandhi because Godse was connected to the RSS. What do you have to say?

I don't wish to comment on what has been published. But I maintain what I said. Godse had a connection with the RSS and it was because of the atmosphere created by the RSS that the despicable act of Mahatama Gandhi's assassination was made possible.

The BJP alleges that the real reason for this latest campaign is your ambition to replace Dr Manmohan Singh as the Prime Minister.

This is entirely wrong. My aim is not to become the Prime Minister but to totally expose the communal forces.

Rumour has it that the Dr Manmoahn Singh is not happy and thinks that any cabinet minister, before making any public statement should take the clearance of the PMO

I do not comment on rumours. The Congress policy on Mahatama Gandhi assassination and the RSS ideology has always been the same. I am just articulating that.

The RSS has sent you a legal notice asking for a written apology. Sitaram Kesri had apologised, what would your response be?

Kesriji was a senior leader and he is now no more, so I won't say anything about him. As for my own response, I have already clarified that with my statement of April 16 (appended below) that I am prepared for any sacrifice that I may be called upon to make in the fight against communal forces. There is no question of any written apology.

AICC is soon to meet and you are a member of the Political Affairs Commitee, would you be raising your anti-RSS campaign there as well?

I would certainly place my thoughts before the committee. The final decision for accepting or rejecting a proposal of course vests with the Congress president.

Statement issued by Arjun Singh on August 16 in response to the RSS legal notice:

I have received a notice from  Shri Rajesh K. Gogna Advocate, acting on behalf of the Delhi Unit of the RSS. He has made some references to my statement regarding the RSS and has sought a written apology from me. This matter will be dealt with my Legal Adviser in the appropriate legal manner.

I would, however, like to inform the Delhi Unit of the RSS that I am an humble soldier of the Congress Party. I had the proud privilege to touch the feet of Gandhi ji  in August 1947 and was formally inducted into the  Congress Party with the blessings of India's Man of destiny, Pandit Jawaharlal Nehru in March, 1960.  Since then I have had the honour and privilege to serve the party under the dynamic and visionary leadership of Smt. Indira Gandhi ji, Shri Rajiv Gandhi ji and Smt. Sonia Gandhi ji. I am conscious of the fact that, howsoever, insignificant I may be, I carry with me the legacy of a great National party, which struggled for and achieved independence for the Country.

As a Congress worker it has been an article of faith for me to fight against all communal forces which I have been doing for the last 45 years. The question of my submitting a written apology to the RSS, therefore, simply does not arise. I am prepared for any sacrifice that I may be called upon to make and will treat it as a great honour for myself.