How bizarre can it get? Ganguly has been named in the Test team when his specialty, arguably, is in the ODIs where VVS Laxman was sent out as a replacement for Dravid. And now Laxman is the vice-captain, and not Sehwag. 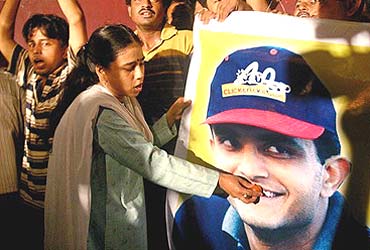 Desperate times, desperate measures? Or is it plain political pressure?

The national selectors have, as expected, reportedly on the strong pressure from the West Bengal contingent in Parliament—where such expert Cricket commentators as Brinda Karat had pleaded his cause—finally confirmed the recall of former captain Sourav Ganguly — onstensibly to beef up the tottering Indian line up for the three-Test series against South Africa. It begs the question: if he is such a solid hope, why not send him as a replacement for Dravid for the ODIs, Ganguly's forte?

The promotion of VVS Laxman as the vice-captain for the Test team would perhaps gladden the hearts of many a purist, but then wasn't he said to be unfit just a few weeks back?

Facing the heat in the wake of India's disastrous show of late, the selectors had an unusual meeting with BCCI president Sharad Pawar in the morning before they picked the 16-member squad which included opener Gautam Gambhir and paceman Zaheer Khan.

VVS Laxman, suddenly back in favour after being kept out of the one-day team on grounds of fitness, was elevated as vice-captain for the Test series beginning on December 15.

The axe fell on Mohammad Kaif and Suresh Raina for India's dismal display in the one-day series, which they have already squandered 3-0 to the South Africans and the duo would return home after the last ODI on December 3.

Ganguly's comeback after being in the wilderness for ten months was expected considering the frenzy that had been building over the past two days and his subsequent stepping down from Bengal captaincy.

Asked about the left-hander's inclusion, selection committee chairman Dilip Vengsarkar said "If you look at the performance in South Africa, our batting has failed. We need experienced players like Laxman and Ganguly."

Ganguly, on his part, promised to give his best on the tour given his experience of having played on tracks with bounce and carry.

"My job is to go and do well. I have lot of runs behind me and experience to play on the bouncy pitches in South Africa," Ganguly told reporters at the Eden Gardens.

However, he would not be able to represent Bengal in their Ranji Trophy game against Mumbai starting December 1 as he is scheduled to leave for South Africa from Mumbai on Dec 3 along with Vikram Rajvir Singh and Gambhir.

Ajit Agarkar and Dinesh Mongia would also return home with Raina and Kaif after the one-day series.

Ganguly comes in the place of an injured Yuvraj Singh in the middle order while Zaheer was rewarded for his good show in the one-dayers with a Test berth. Both Ganguly and Zaheer last played a Test against Pakistan in January this year.

Ganguly, whose comeback is bound to ruffle a few feathers given his soured relations with coach Greg Chappell, is expected to turn out in the warm-up game against South Africa A at Potchefstroom from December 7-10.

Gambhir was also finally rewarded for his consistency in the domestic circuit with a place in the 16, announced by BCCI secretary and selection committee convenor Niranjan Shah at a press conference in the Capital.

Vengsarkar said the selectors wanted to send out the message that nobody could take their place in the team for granted through their decision to strip Sehwag of vice-captaincy.

"Absolutely. Nobody can take his place in the team for granted," said Vengsarkar when asked whether removing Sehwag from vice-captaincy was a message to him.

"Pathan bowled well the other day. He also batted well. You cannot just drop him like that, it will spoil his confidence. He is the player for the future, we are sure he will perform soon."

with inputs from PTI