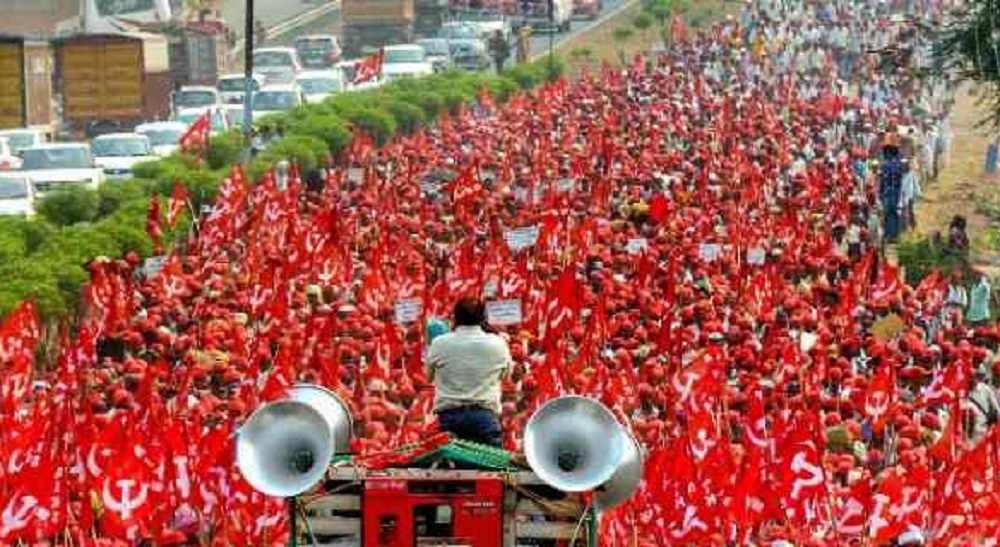 outlookindia.com
2018-03-11T15:08:56+05:30
Nearly 35,000 people demanding waiver of all farm loans and implementation of the Swaminathan Commission report are marching towards Mumbai from Nashik.
The march has been organised to protest the failures of the state BJP government on the farm front, including issues like farm loan waivers, remunerative prices for produce, non-implementation of the recommendations of the Swaminathan Commission as well as the Forest Rights Act.
Protesting farmers have demanded a change in the plan to link rivers in Nashik, Thane and Palghar to ensure that tribal lands are not submerged and water from the scheme be made available to these areas as well as other drought-prone districts, organisers said to PTI.
They are also protesting against the state government's land acquisition for projects like high speed rail and super highways.
The protesters will reach Mumbai on March 12.
The 180-km march by the All India Kisan Sabha (AIKS) protest commenced on March 5 from the CBS Chowk in Central Nashik and reached Anand Nagar in Thane on Sunday, reported ANI.
The AIKS is the farmer wing of Communist Party of India — Marxist (CPM). The march will be attended by AIKS national president Ashok Dawale, CPM MLA JP Gavit, state president Kisan Gujar and working president Arjun Ade among others.
The Indian Express reported that political parties including Shiv Sena, Maharashtra Navnirman Sena(MNS) and Aam Aadmi Party have extended support to the farmers' agitation.
The protesters have planned to gherao the state legislature on Monday against the government in protest against the neglect shown towards farm sector. Meanwhile, Mumbai police have diverted traffic at various places in Thane and Mumbai to avoid congestion.
On Saturday, Mumbai Police on Twitter put out an advisory mentioning about the traffic management during the long march.

In its advisory, the Mumbai Police said that Eastern Express Highway, southbound from Anandnagar toll plaza to the Somaiya ground, will remain closed on Monday for heavy and goods vehicles from 9 am to 11 pm.
In 2017, the Maharashtra government had announced a loan waiver of Rs 4,000 crore under the first phase of the farm loan waiver scheme.
(With Agency inputs)
For in-depth, objective and more importantly balanced journalism, Click here to subscribe to Outlook Magazine