Besides huge economic costs and adverse ecological effects, these inter–basin water transfer schemes will be politically unfathomable for Narendra Modi 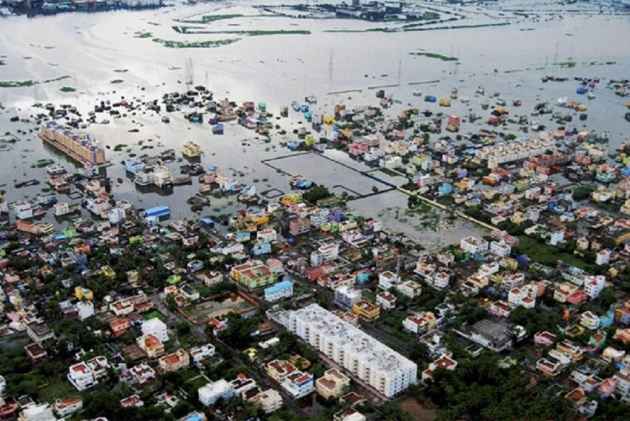 While the Ganga-Brahmaputra basin is reeling under devastating flood for the last two weeks resulting in deaths of more than 1000 people, Narendra Modi government has once again revived India’s decades old plan of interlinking its major rivers. Though Indian government had the prior information at least a week before about the simultaneous peaking of flood water flow in both Ganga and Brahmaputra in the third week of August, it is difficult to comprehend that such a large number of human casualties has taken place. Instead of introspecting the failures in flood management and taking necessary steps for disaster adapting capabilities, the Modi government is trying again to flirt with the idea of connecting country’s rivers to divert surplus water to deficit regions.

The news of regime’s renewed interest in this river linking project might divert the media attention from the failure of the government in flood management, but there is very little possibility of this grand plan being implemented at least in foreseeable future. The idea of connecting rivers of Indian Subcontinent has its roots in the thoughts of Visveswarya, the legendary engineer of early 1900. Based on that idea, the Indian National Perspective for Water Development framed in August 1980 outlined this river interlinking project. It envisioned linking 14 rivers from the Himalayas and 16 across the India peninsula to bring waters from one area with surplus supplies to others with not enough.

In 2002, the Supreme Court of India ordered, in response to a public interest litigation on long period of inaction and lack of implementation of the proposed interlinking project, “We do expect that the program drawn up would try and ensure that the link projects are completed within a reasonable time of not more than ten years.” However, not much progress has been made on this grand plan. There have been some small-scale interlinking of rivers taking place within single states. In 2015, the Godavari and Krishna Rivers were linked by a canal in the southern state of Andhra Pradesh. A second project, the Ken-Betwa River link is being prioritized now to divert water from UP to MP. As both the states are under BJP rule, the BJP government at the center expects to push this project without much of opposition from state governments. Similarly, there is new interest in the proposal to connect Tapti with Narmada and Daman Ganga with Pinjal to facilitate interstate water transfer between two other BJP ruled states, Gujarat and Maharashtra.

It appears that this Interlinking project, envisioned as a “surplus-deficit” problem with a techno-centric solution, is not only an inaccurate understanding of the problem but also a not a well thought out solution that is implementable. Before embarking upon these water transfer projects, Modi government needs to learn from India’s own historical experiences of water transfer from one state to another. The political sensitivities and environmental problems associated with long distance water transfer projects like Sutlej Yamuna Link, Indira Gandhi Canal and Telugu Ganga Project should be sufficient enough to deter the present government from carrying out any future projects of this nature.

Ideas of linking rivers to equalize surplus and deficit of water are not new. In the 9th century BC, Assyrian Queen Sammu-Ramat, what is now northern Iraq had inscribed on her tomb: "I constrained the mighty river to flow according to my will and led its water to fertilize lands that had before been barren and without inhabitants." This idea has been picked up by numerous engineering schemes since the beginning of last century. But, very few largescale water transfer schemes have been successfully implemented.

Many of these planned projects in different parts of the world have remained in the planning stage for long time. Russian authorities periodically plan but have been unsuccessful to revive an old scheme of water diversion from Siberian rivers to Central Asia, which was scrapped in 1986 by Gorbachev. In recent years, Turkey has also come up with a grand plan to divert water from its GAP project on the Euphrates-Tigris River system to Gulf countries. In July 2001, the US President George W. Bush had even publicly expressed his plan of persuading Canadian Prime Minister about piping Canadian water to the parched American Southwest, which was swiftly rejected by the Canadian Environmental Minister. Besides, high infrastructure and maintenance costs, such grand endeavors become more problematic when the water has to be exported across several political units.

Only the authoritarian regime in China has managed to construct its mega South-North Water Diversion, a 2,400km network of canals and tunnels to divert water from China’s humid south to its parched, industrialized north. But, India is not a one nation, one language and one leader country like China. While flirting with this idea from time to time, authorities in India try to forget the ground political odds hugely stacked against its implementation. Besides huge economic costs and adverse ecological effects, these inter–basin water transfer schemes will be politically unfathomable.

In India’s federal structure, a national consensus is required to plan the country as a single basin. While the water shortage states are strongly in favour of declaring major rivers as national assets, others, who have to contribute, resist the idea. Till now, there does not exist even a single river basin authority in India. Most of the states in the Indian Union are already engaged in bitter disputes with their neighbors over water resource allocation, interlinking project if taken up seriously will create new disputes and will also revive the old ones. Regional parties are in power in many of the ‘water surplus’ states, and that will make it further difficult for the center to carry out any planning on inter-state river linking. Unlike in the USA and Australia, where the judicial decisions on shared waters are accepted by disputing provinces, India does not enjoy that benefits as it has been noticed in the interstate disputes on Cauvery and Sutlej waters.

There is no doubt that India’s river-linking plan is politically dangerous in nature, at the same time, it is neither economically feasible nor environmentally sustainable. There is a lack of technical information about the viability of the project given the estimated cost is whopping US$125 to 200 Billion. Beyond a few lines drawn on the map to indicate the rough location of the dams and the canals, nothing is available to independently verify the justifiability and efficacy of the various claims of benefits from the project. Moreover, increasing strength of environmental activism and anti-dam protests have made it almost impossible to build any large dams and water diversions projects in India. Even there is a growing resentment against the existing water diversion projects like Bihar has started blaming Farakka Barrage in West Bengal for increasing number of devastating floods in the upstream.

India’s dream of linking of its rivers has also serious regional implications. Downstream riparian Bangladesh, which shares 54 transboundary rivers, is seriously worried about the impact of these river-linking projects will have on its people, economy and the environment. India’s 1978 plan to divert Brahmaputra water to Ganga also adds further to this insecurity. Any basin based comprehensive water allocation plan becomes further complicated as countries in the upstream, Nepal and Bhutan are reluctant due to their bitter experiences in the past over its joint water development projects with India. China’s recent dam building activities in the upstream of Indus and Ganga-Brahmaputra basin further complicates India’s grand dream of water diversion. Thus, it is most likely that Modi regime’s new interest in interlinking country’s rivers is just an attempt to manage the media discourse to divert the attention from its abject failure in rescue, response and recovery in the ongoing flood disaster in north and eastern parts of India, and not a serious desire to execute this highly challenging grand old dream.


(The writer is a professor of Peace and Conflict Research at Uppsala University, Sweden.)