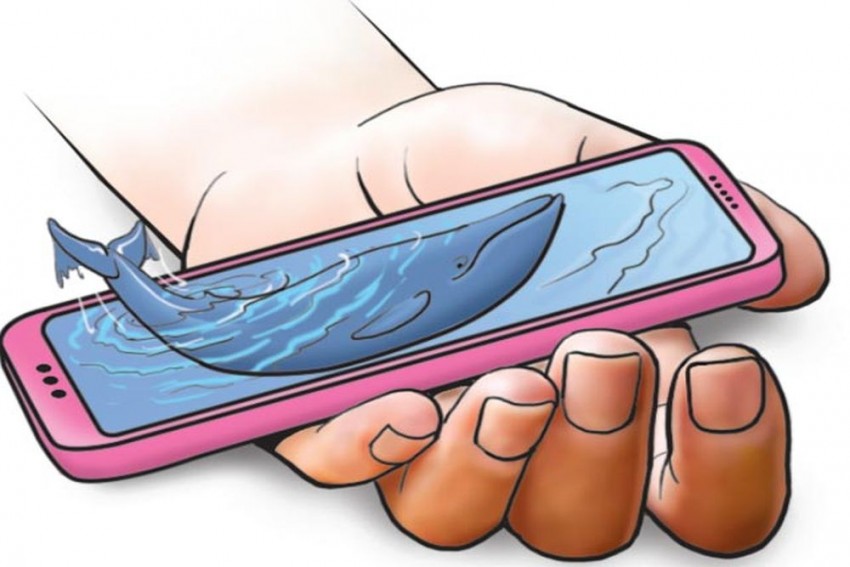 Amid reports of students across the country committing suicides over the ‘Blue Whale Challenge’ online game, a Delhi-based journalist’s Facebook post -- narrating how her seven-year-old niece went searching for “Blue Whale” game on her father’s phone -- went viral on social media.

Priyanka Bansal told Outlook that she wasn't sure if the game downloaded by her niece, Neha, (name changed) was real or fake, but as soon as she realised that it was already downloaded, she deleted it.

“She is very small and i am sure she would not have gone further in operating this game or in reading instructions, But who knows if she could have done this," Priyanka wrote on her Facebook post.

The game, with its origins in Russia, is titled Blue Whale apparently as a reference to the way the largest mammal beaches and dies at the end. In February, Russia linked the deaths of 15-year-old Yulia Konstantinova and 16-year-old Veronika Volkova to the game.

While some say the user has to install an app on their smart phone, others say it’s via social media platforms such as Instagram and Facebook where the administrators get in touch with the participant after those interested throw out posts on social media asking for a “curator”.

A Russian media outlet reportedly linked 130 deaths to the game, saying that the children were part of the same online community. The BBC says that while the rates of suicide among Russian teens is high anyway, the game does exist and first originated on the Russian social networking space ‘Vkontakte’ where a specific set of hashtags reference the game.

In the post -- with a title “Alert - *Blue Whale Game*: It is entering our homes slowly”-- on Wednesday night, Bansal said Neha and her friends were asked by two of her seniors in their school van to install the Blue Whale game app and “not to delete it” because it’s “very funny” and “interesting”.

Along with the post, Bansal also shared three videos in which Neha could be seen weeping and narrating the incident to her.

“My 7 yr old niece who is comfortable in using android play store and usually download baby games and play. We take it lightly and let her use our phones. Today after coming from school she asked her mother to spell blue and without any doubt she dictated it to her. After some time she asked her to spell whale too. Her mother failed to relate it as she asked it at different point. The day went usual with mundane chores,” Bansal wrote.

“At around 10:00 at night, when we were about to sleep she asked me ‘Bua whats Blue whale game is about’. I was amazed to hear those words coming out of this tiny mouth and confirmed ‘Beta are you asking about whale?’ She confirmed that she is asking for the new game. ‘No No that Blue Whale game i am asking’ she said. A sense of fear rushed inside me, ‘but why are you asking XXXX (Neha), vo tou bhoot ki game hain’ i said worriedly. ( We Indians relate anything to bhoot (Ghost)to keep kids out of it) this trick worked,” she added.

She further said: “After that she started howling and crying about her mistake of downloading this game, as she thought now the ghost will haunt her. We got scared that she might have started playing this game. We checked all the devices at home and got to know that she  downloaded this game on her fathers phone.”

Bansal claimed, quoting her niece, the seniors were students of Class 4 or 5.

“I thought whom she is referring would be senior boys but again she surprised us by telling that they are small kids of 4-5 class, she is in 1st standard…She is crying badly again and again and refusing to go to school and to the van now. We are trying to ask her if the kids have suggested something more than she revealed,” she wrote.

Bansal, who works with a news channel, told Outlook, said she had informed the school administration about the incident and asked it to look into the matter seriously.

“I have informed school authorities. They assured me that they have conveyed it to the boys’ parents, and are conducting counseling for the students and their parents,” said Bansal, who didn’t want to name the school.

Following the suicide reports coming from across India, many schools in the country have started conducting students-parents counseling. They have also asked parents to keep an eye on the children and their use of internet on mobile phones.

The Delhi high court on Tuesday sought Facebook, Google and Yahoo's response on a plea to remove links of Blue Whale challenge that has been linked to a number of suicides.

The sudden popularity of the online game has forced the government to issue directions to the internet giants to remove the links to the dangerous game.