Here's To The Future

Movies matter. Naysayers notwithstanding, Slumdog Millionaire's Oscar glory is going to become an icon of hope for many young people in developing countries, especially India. 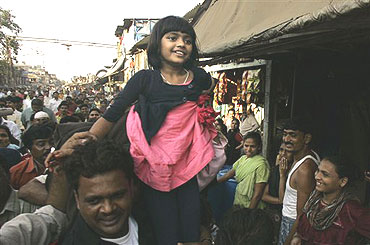 There's something very inspiring about the success of Slumdog Millionaire. With eight Oscars, including best motion picture and best director for Danny Boyle, as well as two Oscars for A R Rahman, and one for Resul Pookutty, Slumdog -- many naysayers notwithstanding -- is going to become an icon of hope for many young people in developing countries, especially India.

Similar is the case with the Oscar for Smile Pinki for best short documentary on the issue of children born with cleft lips. The story of Pinki Kumari from Dabai village, UP and her journey to her "right to smile" is heart warming.

Despite its many faceted stars ranging from Anil Kapoor to Dev Patel to Frieda Pinto, Slumdog Millionaire is perhaps more realistically about the two child actors from the slums in Mumbai: Azharuddin Mohammed Ismail and Rubina Ali. The exposure to the possibilities of life that this movie has given them is truly exciting for an onlooker.

But one should not forget that the environment was created for Obama to get to where he is now. It was the content of his character that enabled him to take the opportunities life offered. In a nutshell, he was ambitious, and when he saw an opportunity, utilized it. The same ambition is now seen in Rubina Ali and Azharuddin. When asked by the media where they will like to be post-Slumdog, both replied that they will like to be offered many more such movie roles. Where they come from is of course important for them to play their roles in Slumdog, but where they go from here will be a package of dreams, ambition, environment, education, opportunities and facilitators.

It is without doubt that movies do play a role in human progress and achievements. When the Indian cricket captain, M S Dhoni was asked in a media interview what inspired him and his team to show such dramatic success in the T-20 series in Australia in 2007, he cited the viewing of Chak De India, a movie revolving around a fictitious Indian women hockey team’s success at the World Cup, as one of the reasons. The real Indian women hockey team credited the same movie for their success in the Asia Cup later that year.

The role of movies in changing social mores has also been immense. Two examples from Hollywood that stand up to such scrutiny are the movies To Kill a Mockingbird (1962) and Guess Who’s Coming to Dinner? (1968). 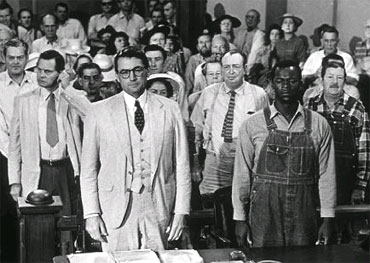 A still from To Kill A Mockingbird

Based on the famous novel by Harpee Lee, To Kill a Mockingbird, the movie’s main character, Atticus Finch (a white lawyer) played deftly by Gregory Peck stands up against racial issues in the American South when he defends a black man (Tom Morrison) charged with raping a young white woman. The lessons that Atticus passes on to his two children, Jem and Scout, are narratives that have influenced the social structures of America in the years that followed. It is also rather important that a highly respected actor like Gregory Peck played that role as his power to influence was truly immense.

Another actor, who had a definite historic role in truly revolutionary films for the US during the 1950s and the 1960s is Sidney Poitier with roles in Lilies of the Field (1963) for which he received the Oscar in 1964 becoming the first African American to ever do so, To Sir, With Love (1967), and the rather prophetic 1968 film, Guess Who’s Coming to Dinner? The last film revolves around the story of a rather young meritorious African American doctor, with academic credentials from the Ivy League Universities, working in the World Health Organization. The problem arises when he falls in love with a white woman and then comes home to dine with her parents, played with sensitivity by Spencer Tracy and Katherine Hepburn. The movie’s final message is about tolerance and acceptance of different  "others" in those turbulent years of the 1960s.  Similar to the real life story of Barack Obama’s parents, who met in Hawaii, the film’s characters meet in Hawaii and Poitier’s white fiancée in the movie dreams of her bi-racial children growing up to be President of the US. Obama, in his own autobiography, Dreams from my father imagines such an awkward dinner taking place in his white mother’s house where she introduces her Kenyan fiancé to her parents. 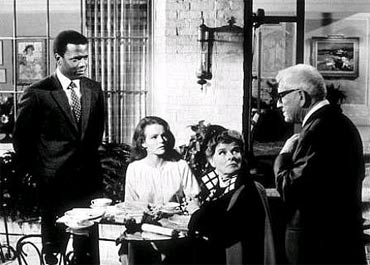 A still from Guess Who's Coming To Dinner

Interestingly, Columbia Pictures, the company that made the movie was rather reluctant in the beginning to support it after hearing the theme but its director Stanley Kramer and actor Spencer Tracy refused to compromise. Stanley Kramer significantly asserted, "What can I do that will be daring, interesting, and necessary?" for society. A movie perhaps cannot bring about social change; it can however, be "a reminder, it’s an irritant, it clarifies, it focuses," as Sidney Poitier reminds us in his autobiography The Measure of a Man.

Hindi movies like Do Bigha Zamin, which won the Prix Internationale at Cannes in 1954, the 1957 movie Mother India, which was nominated for the 1958 Academy Award for Best Foreign Language Film, and Garam Hawa, were instrumental in setting the social mood in India in those years.

In that light, the social mood in India at present is of opportunity as a consequence of globalisation. As a result, a movie like Slumdog Millionaire is welcome as it captures the stories of slum kids making it in life based on their own perseverance, ingenuity and faith. Also, the creative ability of Danny Boyle to translate this non-mainstream story into a lively and poignant film is commendable and brings to mind the words of Poitier about the role of films in society.

Poitier had gone on to further argue, "Compassion for other human beings has to extend to the society that’s been grinding the powerless under its heel. The more civilized the society becomes, the more humane it becomes; the more it can see its own humanity, the more it sees the ways in which its humanity has been behaving inhumanly". He was talking in terms of racial inequality in social life. We in India do suffer from the social reality of class and caste inequality buttressed by extreme poverty. These forces can create anguish and pain. Poitier’s advice here is worth mulling over: "Anguish and pain and resentment are very human forces. On very rare occasions there comes a Gandhi, and occasionally there comes a Martin Luther King, Jr…or a guy like Nelson Mandela. When these people come along, their anger, their rage, their resentment, their frustration--these feelings ultimately mature by will of their own discipline into a positive energy that can be used to fuel positive, healthy excursions in life".

Slumdog Millionaire is a positive force, magical in its pull on the audience. The New York Times reporter David Carr wrote on February 24 that "despite all the planning and guile of production executives, directors, producers, and marketing executives, movie magic is still something that occurs in the space between the audiences and the screen at the front of the room".

Very similar to the trajectory of Guess Who’s Coming to Dinner?, big movie studios like Warner Brothers had abandoned Slumdog Millionaire for fear of a lack of audience but the movie still made it -- and made it big.

As I ended up saying after seeing the movie, here's to the future.

Dr. Namrata Goswami is an Associate Fellow at the Institute for Defence Studies and Analyses (IDSA), New Delhi. The views expressed here are that of the author and not that of the IDSA