No summation or critique, only a discrete and deferential glimpse of his salient contributions and achievements, is all, by way of homage, that's possible for an expatriate vagrant to offer in memoriam. 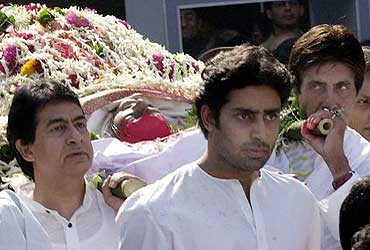 To die is landing on some distant shore.

With the doyen of Hindi poetry, Harivansh Rai Bachchan breathing his last at 95 in Mumbai on 18 January 2003, a phenomenon, unique to Hindi, comes to an end. Eulogy being no summation or critique, only a discrete and deferential glimpse of his salient contributions and achievements, is all, by way of homage, that's  possible for an expatriate vagrant to offer in memoriam.

Bachchan has paid a very reverential tribute to the entire vista of his provenance: Pratapgarh, Basti (Shravasti), Ayodhya, and Allahabad. He claimed all of his inheritance joyously and proudly. He not only remembered and memorialized his roots and forebears, he also recited them in his prose and poetry tirelessly.

He never forsook or failed Awadhi, his mother tongue. Repeatedly he would invoke it for his emotional and literary sustenance. While translating Khayyam's rubayiat he fumbled for a proper Hindi word for "cock", and he found his quest admirably answered in Tulasidas: Arunshikha (Uthe Lakhan nisi bigat suni arunsikha dhuni kaan The night over, Lakshman woke up on hearing the cock crow).

His passion for Awadhi made him a lifelong devotee of Tulasi who became his favorite and permanent treasure trove. And, from Awadhi folk songs he never ceased cherishing the lyrical and the lilting. He heard and sang them rapturously. One very popular kajri that I recall having read in his autobiography ran: Are raamaa kachchii kalii kachnaar chhuat dar lagai re Harii (O Rama, I fear touching the young bud of Kachnaar). The translation is too poor to mean anything.

His autobiography in four volumes, a landmark in Hindi literature, is sprinkled all over with Awadhi nouns and verbs, some of which he may have rescued from oblivion, and used effectively with exhilaration. As if in a confessional, he once wrote Man kii man hii meN rah jaatii baat binaa awadhi meN bole (Unless spoken in Awadhi many things remain mute). In a tribute to Allahabad he wrote gaata huuN apanii layaa bhaashaa siikh Allahabad nagar se (Having learnt my rhythms and language from Allahabad, I sing). He desired that his voice should remain distinct. And his voice remained unique (despite several imitators), like his famous gait and mien.

I had seen him in Agrawal Vidyalaya Inter College, Zero Road, Allahabad, in the late thirties. He was a teacher there. Those were the days when he had established his reputation as a popular poet, highly in demand. Those days he recited his poems, many a time, without even the benefit of a microphone, to very large audiences which would hear him spell bound and request for more.

I saw him in 1945-47 as a Lecturer in English, Allahabad University. I remember very distinctly the scene when he was walking by and saw a student trampling the lawn which had the sign: Don't Walk. He just asked the errant boy: Didn't you read the sign?

A classmate of mine, Satyendra Sharat, was in Bachchanji's English class. Sharat became close to him. He is a playwright settled in Delhi.

In the 60s, I saw him in Shri Venkateshwar College, New Delhi, when he came to preside over a function of Hindi Samiti arranged by a colleague of mine, Mr Tiwari. It was a pleasant surprise for him to see someone from Allahabad who, I told him, had once reviewed his book Aarati aur Angaare for Bharat, the Hindi daily of Allahabad. He wanted to see it. Very graciously he invited me to visit him in his office at the External Affairs Ministry. When we met, we talked long, perhaps for hours.

He was a prompt correspondent. To each of my letters from Varanasi in the late fifties he replied regularly. Unfortunately, I lost the precious pile of his letters in circumstances too personal and painful to bear narration here.

He was the first to have innovatively popularized in Hindi-speaking world the words madhushala (maikada/bar), and madhubala (saki).

Very disciplined in his daily routine, he never looked stern as his picture on the cover of books published by Rajpal, Delhi, show him to be. Rebellious, individualistic, and humane - he was a strange amalgam of these endearing attributes. A hilarious and touching moment saw him presiding over an inter-religious marriage. The groom was Susheel, the bride Mumtaz (rechristened by him as Uma). He, as father, performed kanyadaan!

The variety and volume of his experiences and exertions, and his contacts in the several strata of society, are surprising in their sweep, as too his phenomenal memory of things literary and otherwise. His was a life lived well, lived full. Above all sectarian narrowness, he lived the way he thought, the way he wrote.

He brought the language of Hindi poetry closer to the common usage and bent it skillfully to express his innermost sentiments admirably well, and in the process, he forged a style and diction all his own.

He had the good luck of having his readership in millions. Never had so much success and renown favored any Hindi poet and all that in his lifetime. His creative afflatus never flagged until he became bed-ridden over the last several years.

A long stretch of eventful life and a historic period of Hindi penmanship end with him. He enriched Hindi abundantly. He was one of a kind. He was easily among those few of whom it can be readily said: Naasti yeshaam yashah kaaye jaraa maranajam bhayam (The corpus of his renown need not fear old age or death).