The death of a nation is a rare and somber event. But the vision of a unified, independent Palestine threatens to be another casualty of a Hamas-Fatah civil war, stoked by Israel and its enabling ally the United States. 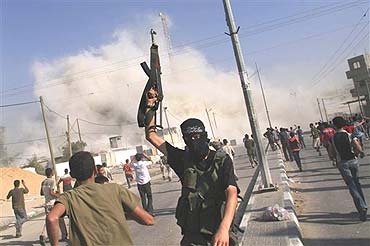 The death of a nation is a rare and somber event. But the vision of a unified, independent Palestine threatens to be another casualty of a Hamas-Fatah civil war, stoked by Israel and its enabling ally the United States.

Recent chaos may mark the beginning of the end of the Palestinian Authority. That might not be an altogether unfortunate development for Palestinians, given US-Israeli programmes of rendering it nothing more than a quisling regime to oversee these allies' utter rejection of an independent state.

The events in Gaza took place in a developing context. In January 2006, Palestinians voted in a carefully monitored election, pronounced to be free and fair by international observers, despite US- Israeli efforts to swing the election towards their favourite, Palestinian Authority President Mahmoud Abbas and his Fatah party. But Hamas won a surprising victory.

The punishment of Palestinians for the crime of voting the wrong way was severe. With US backing, Israel stepped up its violence in Gaza, withheld funds it was legally obligated to transmit to the Palestinian Authority, tightened its siege and even cut off the flow of water to the arid Gaza Strip.

The United States and Israel made sure that Hamas would not have a chance to govern. They rejected Hamas's call for a long-term cease-fire to allow for negotiations on a two-state settlement, along the lines of an international consensus that Israel and United States have opposed, in virtual isolation, for more than 30 years, with rare and temporary departures.

Meanwhile, Israel stepped up its programmes of annexation, dismemberment and imprisonment of the shrinking Palestinian cantons in the West Bank, always with US backing despite occasional minor complaints, accompanied by the wink of an eye and munificent funding.

Powers-that-be have a standard operating procedure for overthrowing an unwanted government: Arm the military to prepare for a coup. Israel and its US ally helped arm and train Fatah to win by force what it lost at the ballot box. The United States also encouraged Abbas to amass power in his own hands, appropriate behaviour in the eyes of Bush administration advocates of presidential dictatorship.

The strategy backfired. Despite the military aid, Fatah forces in Gaza were defeated last month in a vicious conflict, which many close observers describe as a pre-emptive strike targeting primarily the security forces of the brutal Fatah strongman Mohammed Dahlan. Israel and the United States quickly moved to turn the outcome to their benefit. They now have a pretext for tightening the stranglehold on the people of Gaza.

'To persist with such an approach under present circumstances is indeed genocidal, and risks destroying an entire Palestinian community that is an integral part of an ethnic whole,' writes international law scholar Richard Falk.

This worst-case scenario may unfold unless Hamas meets the three conditions imposed by the 'international community' - a technical term referring to the US government and whoever goes along with it. For Palestinians to be permitted to peek out of the walls of their Gaza dungeon, Hamas must recognise Israel, renounce violence and accept past agreements, in particular, the Road Map of the Quartet (the United States, Russia, the European Union and the United Nations).

The hypocrisy is stunning. Obviously, the United States and Israel do not recognise Palestine or renounce violence. Nor do they accept past agreements. While Israel formally accepted the Road Map, it attached 14 reservations that eviscerate it. To take just the first, Israel demanded that for the process to commence and continue, the Palestinians must ensure full quiet, education for peace, cessation of incitement, dismantling of Hamas and other organisations, and other conditions; and even if they were to satisfy this virtually impossible demand, the Israeli cabinet proclaimed that 'the Roadmap will not state that Israel must cease violence and incitement against the Palestinians.'

Israel's rejection of the Road Map, with US support, is unacceptable to the Western self-image, so it has been suppressed. The facts finally broke into the mainstream with Jimmy Carter's book, Palestine: Peace not Apartheid, which elicited a torrent of abuse and desperate efforts to discredit it.

While now in a position to crush Gaza, Israel can also proceed, with US backing, to implement its plans in the West Bank, expecting to have the tacit cooperation of Fatah leaders who will be rewarded for their capitulation. Among other steps, Israel began to release the funds - estimated at $600 million - that it had illegally frozen in reaction to the January 2006 election.

Ex-prime minister Tony Blair is now to ride to the rescue. To Lebanese political analyst Rami Khouri, 'appointing Tony Blair as special envoy for Arab-Israeli peace is something like appointing the Emperor Nero to be the chief fireman of Rome.' Blair is the Quartet's envoy only in name. The Bush administration made it clear at once that he is Washington's envoy, with a very limited mandate. Secretary of State Rice (and President Bush) retain unilateral control over the important issues, while Blair would be permitted to deal only with problems of institution-building.

As for the short-term future, the best case would be a two-state settlement, per the international consensus. That is still by no means impossible. It is supported by virtually the entire world, including the majority of the US population. It has come rather close, once, during the last month of Bill Clinton's presidency - the sole meaningful US departure from extreme rejectionism during the past 30 years. In January 2001, the United States lent its support to the negotiations in Taba, Egypt, that nearly achieved such a settlement before they were called off by Israeli Prime Minister Ehud Barak.

In their final Press conference, the Taba negotiators expressed hope that if they had been permitted to continue their joint work, a settlement could have been reached. The years since have seen many horrors, but the possibility remains. As for the likeliest scenario, it looks unpleasantly close to the worst case, but human affairs are not predictable: Too much depends on will and choice.

The American Hug, The Chinese Frown