Showing no signs of being ruffled by the sensational dope scandal, Shoaib Malik (46 n.o.) and Abdur Razzaq (38 n.o.) kept their composure in the dying stages to snatch a thrilling four-wicket victory over Sri Lanka. 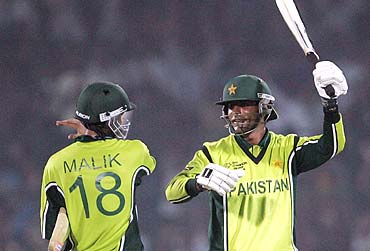 Pakistan showed no signs of being ruffled by the sensational dope scandal as they kept their composure in the dying stages to snatch a thrilling four-wicket victory over Sri Lanka in a Group B encounter of the Champions Trophy at Jaipur tonight.

After restricting the islanders to 253, the Pakistanis relied on Shoaib Malik (46 not out) and Abdul Razzaq (38 not out) to see the team through the tense final overs for a creditable victory with 11 balls to spare at the Sawai Mansingh stadium.

The Pakistanis, playing their opening match just a day after their two pace spearheads Shoaib Akhtar and Mohammad Asif were withdrawn from the tournament after testing positive for a banned drug, did not allow the unsavoury episode to unsettle them as they collected two full points.

Apart from Malik and Razzaq, opener Imran Farhat (53) and Mohammad Yousuf (49) were the other notable contributors in the floodlit contest which went the whole distance unlike most of the other games in the high-profile tournament so far.

Razzak lifted Dilhara Fernando for a six straight over his head to bring the victory in style, sending the Pakistani dressing room into a frenzy.

Electing to bat, the Sri Lankans had themselves to blame for not putting up a bigger total on the board as their top five batsmen got the starts but could not make them count.

Sanath Jayasuriya (48), Upul Tharanga (38), Mahela Jayawardene (31) Kumar Sangakkara (39) and Marvan Atapattu (36) managed to get decent scores but it was not enough. The failure of the lower order batsmen compounded their misery.

The Lankan total could have been even more had any of the top order batsmen carried on for a big score.

With the wicket proving to be a better one than that witnessed the England batting collapse against India on Sunday, Sri Lanka seemed headed for a huge score as their first 100 came in only 16.3 overs.

But the batsmen failed to apply themselves and were out playing some poor cricket.

In the event, Pakistan, without their pace spearheads Akhtar and Asif ,put up a commendable bowling performance.

All-rounder Razzaq rose to the occasion with four for 50, although his early overs were a bit expensive. Shoaib returned with 2-34 while Shahid Afridi lent valuable support with 1-47.

Jayasuriya set the tone for the Lankan innings with his cavalier innings which contained five fours and two sixes.

The veteran left-hander, whose previous visit to India coincided with a bad form, was in rousing form right from the outset when he walked down the pitch to drive Rao Iftikhar Anjum to straight boundary.

Jayasuriya then clubbed Rao Iftikhar over the head for another maximum. He was looking dangerous for Pakistan when Rao got one through to knock the timber.

Tharanga, with two centuries from his first two knocks in the tournament, was all class as he tonked the pacers repeatedly through the off.

But after driving Razzaq on the rise for his sixth boundary, he played an extravagant shot off the next ball to be caught behind.

Jayawardene played smart cricket to exploit the leg side gaps but his sweep shot proved to be his undoing as he mistimed one from Shoaib to be caught at short fine-leg.

Sangakkara was another player who was in ominous form until he lofted Malik straight to long off.

Atapattu had himself to blame after he attempted a cheeky single but fell short of his crease, while Tillekaratne Dilshan played an atrocious cut against the fastish leg-break of Afridi to be bowled played on.

Chaminda Vaas (15) ensured that the 250-mark was crossed before playing across the line to Razzaq.

Pakistan were off to a thundering start, with Mohammad Hafeez and Farhat plundering 39 runs from the first five overs before the former was caught behind to Vaas.

The right-handed opener's 22 runs came from 15 balls with three fours.

Farhat launched the offensive with a cover-driven four off Vaas in the first over. By the time his captain Younis Khan joined him at the crease, he had already crashed a half-volley from Lasith Malinga to the off-side fence.

He then whacked a rank full-toss from the same bowler for another four through the cover.

Younis' was a tame dismissal, trying to glide Farveez Maharoof past the slip cordon and ending up with a simple catch to the wicket-keeper.

Sri Lanka paid the penalty for some loose fielding that saw two catches being dropped, Farhat on 25 and Razzaq on 5.

Farveez Maharoof came in for some rough treatment from Farhat and Mohammad Yousuf who took turns to smash him for three boundaries. That over cost 13 runs and he was immediately taken off the attack. 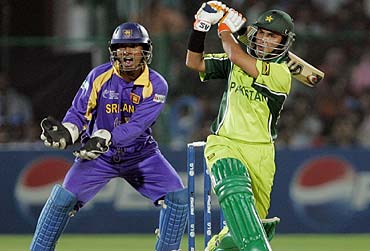 Farhat reached his 50 with a single off Jayasuriya, his fifth one-day half-century, from 58 balls. That also brought Pakistan's 100 in 16.1 overs.

The spinners then put the skids under Pakistan.

Muttiah Muralitharan lured Farhat for a heave and Fernando judged well a high catch to bring to an end to the impressive knock that contained eight fours from 64 balls.

Afridi attempted a big shot too early in the innings. The swashbuckling batsman was beaten by the spin as he came down the track to Jayasuriya and top edged to Tharanga at long off.

Yousuf was all elegance as ever. A casual off glance against Muralitharan stood out for his touch.

The right-hander fell against the run of play when he made the cardinal sin of attempting a run of misfield.

Yousuf punched Jayasuriya on the backfoot to square-leg and as he completed the second run, saw Malinga miss the ball completely. But the fielder recovered in a flash and a clean throw to the keeper's gloves caught the batsman well short of the crease.

Malik then took up the baton to slam Muralitharan over the mid-wicket stands. The Lankans made another breakthrough from a brilliant catch in the deep by Maharoof to send back the dangerous Kamran Akmal.

That dismissal saw the scoring rate dip a bit and the require rate shoot above six.

But the men from the Emerald Isles had not bargained for the rebellious Razzaq.