What was once a demand for an autonomous regional council for the Kukis has assumed a violent turn with the Kuki Revolutionary Army (KRA) and the United Peoples' Democratic Solidarity (UPDS) clashing for supremacy. Latest toll? At least 34 Karbi vil 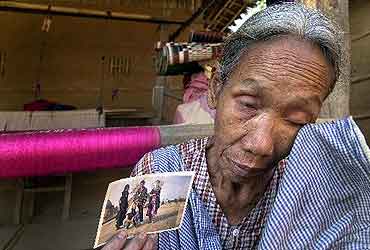 Suspected insurgents of the Kuki Revolutionary Army (KRA) are reported to have killed at least 34 Karbi villagers in three separate places in the Karbi Anglong district of Assam since March 24, 2004.

In the first incident, a group of about 30 KRA cadres raided Uden Tisso and Sarpo Terong villages under Bokajan police station jurisdiction and killed 28 persons and wounded eight others. Separately, another group of KRA cadres attacked Jari Teron, a Karbi village under Manja police outpost, and killed another six Karbis. Inspector-General of Police (Special Branch), Khagen Sharma, said that the attacks were carried out by separate hit squads of the KRA, who also set fire to many houses in these villages.

In what suggests the beginning of a sustained campaign, the Kukis struck again on March 27, 2004, killing five Karbi villagers and setting 60 houses on fire in remote villages of the upper Deopani area under the Bokajan police station.

On the surface, the conflict appears to be a case of innocent civilians being caught in the crossfire of a battle of attrition between two insurgent groups, the United Peoples' Democratic Solidarity (UPDS) and KRA. However, the discord is inherently rooted in the growing schism between two communities at a time when local politics in the district has witnessed significant transformations.

The apex Kuki organisation in Karbi Anglong, the Kuki National Assembly (KNA), has been demanding an autonomous regional council for the Kukis, living predominantly in the Singhasan Hills area. Since 1992, when the demand was first raised through a memorandum to the state government, the KNA has grown from strength to strength, mainly through two rounds of negotiations with the state government in 1997 and 1998.

Even though the KNA's original demand for the establishment of an autonomous region in the district has been long renounced, its acceptability among the Kukis and also among non-Karbi organisations struggling to carve a niche for themselves in the district, remains paramount.

However, as things stand currently, KNA's demand finds little support among influential political entities in the district, mostly dominated by the Karbis. This opposition however, needs to be placed in the larger context of the autonomy movement for the Karbis. The autonomous Karbi Anglong district, constituted under the Sixth Schedule of the Indian Constitution, has been aspiring for an autonomous state status since 1986 under article 244A of the Constitution, a provision created through the 22nd Constitution Amendment Act, 1969.

The demand for autonomy is curiously intertwined with local politics, mostly represented by the Autonomous State Demand Committee (ASDC), the Communist Party of India-Marxist-Leninist (CPI-ML) and the Congress party. Interestingly, Karbi Anglong had decided not to be a part of Meghalaya, which was created as an autonomous State in the year 1970, as it would have meant renunciation of its autonomous district status.

Today, the movement for an autonomous state stands at the crossroads, in the aftermath of the split in the ASDC in July 2000. Internal contradictions, which once threatened to obliterate the movement altogether, led to the creation of two factions, the ASDC-Progressive (ASDC-P, aligned with the CPI-ML) and the ASDC-United (ASDC-U). The split has also divided the once influential Karbi Students' Association (KSA) into three units, aligned with the two different factions of the ASDC and with the Congress Party, which rules the Karbi Anglong Autonomous District Council (KAADC) today.

The July 2000 split in ASDC was a major turning point in the course of the KNA's autonomy movement. The ASDC-U, in a bid to expand its support-base, signed a Memorandum of Understanding (MoU) with the KNA in December 2000, not only recognising the distinct historical rights of the Kukis in the district, but also promised a common effort to fulfill their political aspirations. The MoU states:

"The ASDC is firmly committed to recommend and ensure the creation of a Regional Council for the Kuki tribe within the framework of the Sixth Schedule provision of the Indian constitution."

Such a stand would have been unimaginable in the ASDC's pre-split era. The ASDC-U also entered into two controversial deals, one with the 'Banner organisation' of the Bodo Kacharis in the district in April 2001 and the other with the Meghalaya Government in July 2001.

In the present context, all these agreements are seen as distinctively against the interest of the Karbis as they accommodate aspirations of non-Karbi tribes in the district. In a changed political environment, where compulsions are less demanding and any adherence to such agreements presents adequate vote generating opportunities to other political groupings, the ASDC-U prefers to overlook these agreements, on one pretext or the other. For example, with regard to the agreement with the KNA, ASDC-U now maintains that, since the KNA representative L. Singson, who had put his signature on the MoU, is dead, the agreement stands void. In the words of the ASDC-U President, Holiram Terang, "The agreement has become redundant. It died with Singson. The character of the KNA has changed since then."

The ASDC-U's stand, in a recently published leaflet titled, 'Problems of Unrestricted Influx into Karbi Anglong: The Karbi-Kuki Dimension: An Overview', is interesting in this context:

"The KNA, acting as the apex organisation of Kukis in Karbi Anglong, has been aligning with various political formations, mainly with the anti-Karbi axis, taking part in electoral activities and at the same time championing the Kuki political cause prompted by the Manipur based Kuki Revolutionary Army (KRA)."

The growing number of the Kukis is also perceived to be a threat to the aspiration of the Karbi groups. Even though Kukis claim themselves to be the 'aboriginal tribes of the district', living in contiguous areas in Diphu, Bokajan and Howraghat before the creation of the district, a look at their growing population brings out the essentially mobile character of this tribe.

The approach of the political organizations in the district towards the Kuki population remains varied. While the ASDC-U is willing to provide 'son of the soil' status to the some of the Kukis, who lived in the district before 1951 (the year in which the Karbi Anglong district was created), the ASDC-P does not accept this line. According to its finance secretary, Daniel Teron, "There were no Kukis in the district before 1951 and all of the present inhabitants are essentially migrants." Both factions suggest that the growing number of Kukis (said to be 35,000 by the KNA, according to a 'voluntary census' conducted in the mid-1990s) is due to migration from Manipur and Nagaland, following the Naga-Kuki and Kuki-Paite clashes there.

The result is that the polarisation along ethnic lines is duly complimented with political divisions among the communities. In addition to the larger issue of Kuki autonomy, which has very little chance of garnering support from the dominant Karbis, basic issues of livelihood and economic opportunities have also been marked, and the consequent standoff has benefited the insurgents.

Since its origin in 1999, with the avowed objective of establishing a land for the Karbis, the UPDS has pursued a systematic campaign of cleansing the area of non-Karbis. As a result, the Kukis, like the Bodos, Nepalis and the Hindi-speaking people in the district, become natural targets. Over the last two years, the UPDS has targeted the ginger-producing Kukis in the Singhasan Hill range for systematic extortion.

According to the General Secretary of the KNA, ginger-laden vehicles are forced to pay anything between Rs. 5,000 and Rs. 20,000 to the outfit. The UPDS, in spite of the split it underwent in May 2002 on the question of negotiating with the government, continues to announce economic blockades, primarily targeted at prohibiting the ginger trade. In January 2003, for example, the UPDS's armed wing, the Karbi Anglong North Cachar Hills Peoples' Resistance (KNPR) announced a seven day-long economic blockade starting January 12 to protest against the alleged destruction of forests by ginger cultivators. On several occasions, its armed cadres have set ginger-laden vehicles on fire.

The Kukis over the years have resisted such attempts at extortion, thereby infuriating the UPDS. Recently, the UPDS came up with a notification announcing a ban on ginger cultivation, terming it a 'threat to the environment of Karbi Anglong'. Ginger cultivators, with the slash and burn mode of Jhum cultivation are alleged to have destroyed the forest cover in the hill areas, a charge which can also be leveled against the Karbi cultivators who have settled in the lower part of the same hill areas.

The UPDS' concern for the environment has found favour among various Karbi organisations in the district, primarily with the ASDC-U and the section of the KSA aligned with the Congress party. In the words of the KSA President, Hanuram Engti, "The UPDS demand for environment preservation is a genuine one. The Kukis must stop cultivation of ginger. They have destroyed out environment." In a state like Assam, which is gradually losing its forest cover, Karbi Anglong is no exception. Reserved forest area in Karbi Anglong East has declined from 111,855 hectares in 1993-94 to 72,720 hectares in 1996-97 and further to 48,042 hectares in 2000-2001. It will however, be difficult to relate the depletion to ginger cultivation alone.

The UPDS action against the Kukis has brought the KRA, primarily a Manipur-based outfit, into the scene opening up another and most violent front of conflict. The group, with a declared objective of protecting the interest of the Kukis, is seen to be a serious challenge to the militancy of the UPDS, which till recently enjoyed a local monopoly over violence. Both these groups have clashed repeatedly, and have not only targeted each others' armed cadres, but also civilians, conveniently projected as the rival's sympathizers.

The result is that the district has come to witness significant internal displacements, mostly into Nagaland and Manipur. More importantly, the rising violence has pushed the KNA's autonomy demand into the background.

'...The Pro-BJP Stance Of Samajwadi Party'