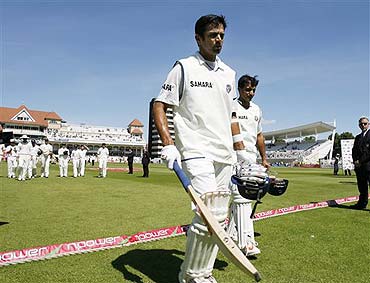 outlookindia.com
-0001-11-30T00:00:00+05:53
Skipper Rahul Dravid believes India's victory in the second Test against England was yet another "small step" taken in the long march towards becoming a dominant team both at home and away.

"Every win that we have, we can take heart from that," Dravid said after India's seven-wicket win at Trent Bridge today.

"We have played well abroad in the last four-five years. We have won everywhere we have toured, won series as well.

"It's great especially for the younger players who haven't seen international success away from home. That's something that will spur them on and inspire them to do much better."

It was only India's fifth win in 47 Tests they had played in England. Avoiding defeat in the third and final Test at The Oval from August 9 will give them their first series win in 'Old Blighty' in 21 years.

India, although they have had strong batting line ups throughout their history, are not known to play well overseas.

Their 1-0 win in the Caribbean last year was their first - ignoring the 2-0 success over a lowly Zimbabwe in 2005 - outside the sub-continent since Kapil Dev led them to a 2-0 triumph in England in 1986.

Yet, led by Sourav Ganguly, they beat Steve Waugh's Australia in Adelaide before the champions bounced back to level the series in 2003-04.

Then they went on to defeat Pakistan 2-1 the same season, their first-ever victory across the border.

In 2002, Ganguly's side crushed Nasser Hussain's England at Headingley although the series was drawn.

Dravid said these wins had added steel to the team's character. "Whenever we go abroad, everybody expects very little of us in any case," he said with a laugh.

"So every time we perform abroad, it's going to be like we have done something great. But expectations have increased in the last 4-5 years.

Dravid pointed out a curious fact that although the team has been tigers on the slow, turning tracks at home, their rare away wins have come in more sporting conditions.

"I have always felt that we have done well when we had the opportunity to take 20 wickets," he said.

"Wherever the conditions give us the chance, we definitely take 20 wickets. Yes, we might lose an odd game but we also win games.

"I have always felt that our best chance is in games where there is definitely going to be a result.

"Sometimes on flat wickets we struggle to take 20 wickets and that puts us on the back foot quickly.

"Even the last time we won here in Headingley, we had the chance to take 20 wickets. All it needs is one good batting performance from us and it sets up the game."

Dravid equated the Trent Bridge win with England's success in Mumbai last year, in terms of satisfaction the two teams should have derived.

"England have a very good record in England. And for us to come here and beat them convincingly is probably as sweet for us as it must have been for them when they beat us in Bombay on the last tour," he said.

Dravid was all praise for man of the match Zaheer Khan who turned the match on its head with a sensational spell on the fourth day.

"It was a great team effort. Zaheer was obviously the star of our bowling. He really showed what a leading bowler must do," the skipper said.

"In these conditions he was asked to put up his hand and he did that. Whenever we expected him to perform he did that.

"On the first day, when we won the toss, Zaheer stood out. Yesterday afternoon, when the game was in a balance, he took the game by the scruff of its neck and delivered."

Zaheer was also at the centre of a sledging controversy. He was seen pointing his bat to Kevin Pietersen while batting on the third evening.

The 28-year-old paceman said later that the England players upset him by throwing jelly bean at the crease and it actually fired him up the next day when he bowled.

"If he is going to do so well every time after he gets upset, I would rather like him to be upset," Dravid said in a lighter vein.

"I've never seen Zaheer so keen and so fired up ... What really gives me great satisfaction is what Zaheer has done with the ball.

"If we can keep putting up these performances in difficult conditions, we can produce a lot more results showing that kind of mental toughness on the field."

'Rankings Not A Reflection Of Standards'