President Pervez Musharraf faces increasing criticism for his inept handling of the quake aftermath, leading to concerns about his personal safety. 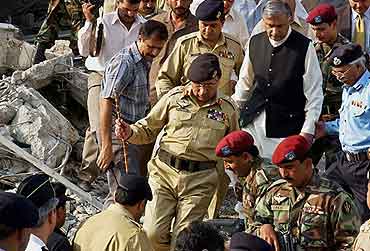 outlookindia.com
-0001-11-30T00:00:00+05:53
As the total number of fatalities in the earthquake, which struck the Pakistan-Occupied Kashmir (POK) and the North West Frontier Province (NWFP) on October 8, 2005, crosses the 50,000 mark and is inexorably moving higher and higher as more and more dead bodies are recovered under the debris and more and more injured survivors are succumbing to death due to lack of medical facilities and protection against the severe cold which has already set in, President Pervez Musharraf has been coming under increasing criticism for his inept handling of the quake aftermath.

What has shocked the people is that for hours after the powerful quake struck, the Pakistani authorities were unaware of the magnitude of the disaster and kept assuring the people that apart from the collapsed building complex in Islamabad, the quake had not caused any other damage. Pakistani seismologists and other scientists failed to determine that the epicentre of the quake lay in the Muzffarabad area and alert the government.

The quake practically destroyed large parts of the POK, including Muzaffarabad, its capital, and killed over 35,000 persons, the majority of them civilians. Among those killed were about 2,000 civilian officials and 500 Pakistani Army officers. It is reported that as the people of Muzaffarabad saw their capital crumbling in a matter of two minutes, many could not connect it to a quake. Instead, they thought that India had made a nuclear strike against the POK. It took them some time to realise that it was actually a quake.

The quake totally cut off civilian as well as military lines of communication between the POK and the rest of Pakistan and the surviving officials in the affected areas had no way of informing Islamabad as to what had happened. It is said that while the quake struck Pakistan shortly before 9 AM, it was only by around 3 PM that Musharraf and his officers realised the extent of the havoc caused by the quake in the POK and the NWFP.

The two Divisions of the Pakistan Army stationed in the POK were in a total state of confusion following the death of about 500 officers and other ranks and injuries to many more. The first reaction of the surviving army personnel was to undertake efforts to rescue their own colleagues, who were buried under the debris.

The first reaction of the Army's General Headquarters (GHQ) in Rawalpindi once it came to know, after 3 PM, of the extent of the devastation caused and the state of confusion in the ranks of the Army personnel stationed in the POK was to rush reinforcements to the POK to restore and strengthen the defences along the Line of Control (LOC), lest Indian forces take advantage of the collapse of the defences to infiltrate into the POK in order to destroy the terrorist training infrastructure, which had not been brought down by the quake.

The first 24 hours after the quake struck were spent by the Army to attend to the military needs of the situation and only thereafter it started paying attention to the civilian needs. The civilian administration had practically collapsed due to the deaths of a large number of officials. Those, who survived, had suffered tragedies in their families and, as such, their heart was not in the rescue and relief work. They were more interested in rescuing their relatives from the debris and arranging medical attention for them.

The traumatic experience of the local civilian administration and the local military set-up should have made it apparent to Musharraf that they would not be able to rise to the occasion and that, therefore, he would have to rush civilian officials and military reinforcements from outside the POK and the affected areas in the NWFP to look after rescue and relief. He failed to do so.

Even in normal times, access to Muzaffarabad is easier from India than from Islamabad, and after the quake had devastated Muzaffarabad and blocked all road communications, thereby cutting off the POK from the rest of Pakistan for three days, only Indian medical and other relief teams would have been able to move to Muzaffarabad on foot and initiate rescue and relief work and keep doing it till Islamabad was able to restore the road communications and take over this job from the Indian teams.

The offer made by India to rush its rescue and relief teams on foot was rejected by Musharraf because of what he described as the political sensitivities involved. What he perceived as the military requirements of the situation were more paramount to him than the humanitarian ones. If the Indian teams had gone into action on the first day itself or at least on the second day, thousands of innocent lives might have been saved.

From October 12 onwards, the Pakistan Army has a better control of the situation and has stepped up the humanitarian work with the help of generous assistance from the international community, including India. Despite this, criticism of Musharraf for his inept handling of the aftermath of the quake continues to grow. He has been accused of lack of co-ordination even more than a week after the quake, inadequate mobilisation of the rescue and relief efforts and giving priority to the humanitarian requirements of the Army and continuing to neglect those of the civilians.

Zaffar Abbas, the BBC's correspondent in Pakistan, has reported as follows on October 14, 2005, from the totally destroyed town of Balakot in the NWFP:

"The military's involvement in Pakistan's politics has always been questioned. But never before has it faced such severe criticism by members of the public, as it is doing now for its role in the relief operation. From Muzaffarabad and Bagh in Pakistan-administered Kashmir to Balakot in the country's northern region, people have been accusing the army of failing to come to their help in their time of real need. The criticism was quite sharp in the first couple of days. But even after the relief goods started to arrive and rescue teams launched a major drive to find possible survivors, many of the victims' families are saying it is too little - and certainly too late."

Musharraf has been frequently touring the affected areas, but has been accused of visiting only the injured military personnel and avoiding the civilian victims, lest he become the target of their anger. There has been growing criticism of him in the Pakistani army at the lower and middle levels. The Hizbut Tehrir (HUT) has reportedly been circulating pamphlets in the military barracks, accusing him of being more interested in protecting American lives in Afghanistan than in protecting Pakistani lives in the POK and the NWFP.

Next to the Punjabis and the Pashtuns, Kashmiris from the POK and the Northern Areas (Gilgit and Baltistan) constitute the third largest component in the Pakistan Army. Unhappiness amongst them over the perceived failure of Musharraf and his officers to protect their relatives in the POK could add to the threats to Musharraf's personal security.