It is high time that the US and the world called the Pakistani bluff, and demanded that the country and its leadership fulfil its commitments to neutralise terrorism from its soil, and engage in international relations in accordance with contemporary 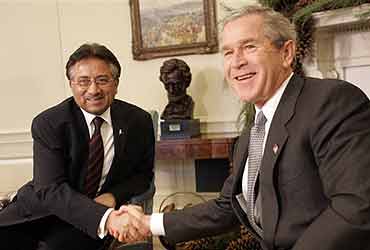 While the details of the many 'disclosures' in General Pervez Musharraf's book, In the Line of Fire, will be discussed ad nauseam over the coming months (just as, at one time, Ayub Khan's fabrications in his autobiographical Friends not Masters were discussed, and then quickly forgotten), one thing is already and abundantly clear: Gen Musharraf has now been demonstrated to be an inveterate, compulsive and unashamed liar. This, of course, is not news to those who have watched Pakistan and its leader through the clear eye of realism over the past seven years. The Indian and global discourse has, however, been dominated by the many who have tended to grant the General extraordinary latitude, and others who were seduced into believing his every past falsehood. Since many of Gen Musharraf's lies have been exposed in his own narrative now, his positions can be expected to attract a greater measure of scepticism in future.

There is, in fact, significant and mounting evidence that the extraordinary licence that Pakistan and its dictator have long enjoyed is approaching, if not an end, at least some measure of curtailment. Recent reports from UK suggest that opinion within the security establishment is becoming increasingly hostile to Pakistan, and an internal document has accused Pakistan's ISI of supporting the Al Qaeda and Taliban. The document suggested, further, that the ISI should be dismantled and that Gen Musharraf himself should resign.

Pakistan's continuing role in supporting and sponsoring terrorism has been widely acknowledged by a range of Western sources, including officials, particularly among those who are directly connected or familiar with developments on the ground— including the leaders of the US-led military alliance forces deployed in Afghanistan. It is useful to recall that, as recently as September 21, 2006, Marine General James Jones, NATO's top military commander in Afghanistan, became the latest in a string of US officials to confirm that the Taliban leadership was directing the Afghan insurgency from Quetta in Pakistan. Nevertheless, most Western Governments try to studiously look the other way, and Gen Musharraf continues to receive pats on the back from President Bush and the State Department.

India's leaders have also shown themselves to be periodically susceptible to this selective blindness, and have only recently reclassified Pakistan as a 'victim' rather than a perpetrator of terrorism. Only an occasional leader, like Afghanistan's President Hamid Karzai, has remained steadfast in his insistence that Pakistan is an essential part, indeed core, of the problem of terrorism, and not any part of a possible solution.

The world's tolerance of Pakistani terrorism is, indeed, astonishing in view of enormous and direct evidence of Pakistani mischief in some of the worst incidents of terrorism, as well as networks and conspiracies for terrorism targeting the West, in the recent past. Indeed, a listing of the Pakistani "Footprints of Terror" appears endless, and includes almost every major terrorist attack on targets in the West since and after 9/11.  A look at just a handful of the recent 'footprints' is edifying, with the conspiracy for the multiple hijacks in UK leading the listing.

Just over the last six months,

The principal argument for the continuing Western, and particularly US, support to Pakistan and to Gen Musharraf personally, is the specious reasoning that Osama bin Laden, the Al Qaeda and the Taliban cannot be neutralised without Pakistani assistance. The fact, on the contrary, is that they cannot be neutralised because they continue to enjoy significant Pakistani support and assistance, and a very substantial freedom of operation on Pakistani soil. Gen Musharraf has repeatedly held up the example of the 600-plus 'Al Qaeda terrorists' that he has handed over to US custody as evidence of his good faith.

The reality, however, is that most of these are low-value targets, and the few who had a significant position or presence in the Al Qaeda were only arrested by Pakistani forces when they were left with little choice, as Western intelligence agencies had provided specific and detailed intelligence on their location. Pakistan's 'cooperation' in the 'Global war on terror' has been both reluctant and meagre. Pakistan seeks constantly to keep the instrumentalities of terrorism— the various terrorist groups operating on and from its soil— alive in the long-term expectation that, eventually, US and Western enthusiasm for and commitments in the region will wane, creating the space for a restoration of Pakistan's strategic over-reach through terrorism across South and Central Asia.

It is high time that the US and the world called the Pakistani bluff, and demanded that the country and its leadership fulfil its commitments to neutralise terrorism from its soil, and engage in international relations in accordance with contemporary and civilised norms, and not through the instruments of terror. Failing this, Pakistan would need to be completely de-militarised, left only with weapons to fight terrorism and crime. Gen Musharraf has admitted that he executed his U-turn on Afghan policy because Mr Richard Armitage threatened to 'bomb Pakistan into the Stone Age' (though this has been denied by Mr Armitage, and subsequently by the ever-lying Gen Musharraf). This— and this alone— is the kind of choice that will force Pakistan and Gen Musharraf into abandoning their long-cherished enterprise of international terrorism.

K.P.S. Gill is a former Punjab DGP and is currently advisor to the Chhattisgarh government on Naxalite affairs. This piece first appeared in the Pioneer

Fatwa To Kill The Pope