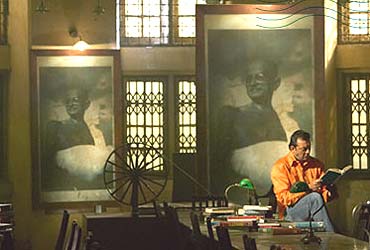 outlookindia.com
-0001-11-30T00:00:00+05:53
Bande Mein Tha Dam (The guy had guts), Bandemataram! goes the opening line of a song saluting Mahatma Gandhi in the just-released Lage Raho Munna Bhai, the immensely enjoyable second part of Munna Bhai MBBS, which made the inimitable crooks Munna and Circuit a rage in 2004. For the uninitiated, Munna is a small time "Bhai" (or gangster) in Mumbai, ably assisted by his devoted crony Circuit. Though kidnappings, extortions and bash-ups are very much their cup of tea, these two have hearts of gold which makes them modern day Robin Hoods, who have their own unique techniques for bringing smiles to people’s faces. Cheeky to the core, they’re nonetheless sensitive where it really matters—they’re the humane face of street smart India who debunk history and its legacy but cannot discard it.

In their latest adventures, Munna and Circuit take to "Gandhigiri" or living life by the principles of Bapu, as opposed to their habitual dadagiri. Munna’s initiation into "Gandhigiri" begins with his mission to win a radio quiz on Gandhi, which would get him invited to a live show with the girl of his dreams, Jhanvi, a radio jockey. Of course, he wins the quiz, having kidnapped some professors who supply answers to the questions asked on the radio show, meets his lady love and suitably impresses her with his curious mix of Gandhi and street lingo. And soon it becomes his mission to set things right for her and her friends, a group of senior citizens, who’ve been cheated out of their property by the wily promoter Lucky Singh.

Trouble starts when he gets invited to give a lecture to her group of friends on Gandhi. Munna now does something he never did all his life—he steps into a library, and starts reading up on Gandhi to prepare for the upcoming test of love. Working non-stop for three days and nights, he starts hallucinating. He sees the ghost of Gandhi, which will now re-appear whenever Munna is faced with a tough decision to make. The ghost is the conscience Munna never knew he had —it holds up a mirror to the gun-toting Munna and teaches him to win his battles with a smile. Inspired by the Gandhi way of telling the truth and taking on your opponents with a smile, Munna becomes the rage of town, with a whole following of young people, who find these simple principles the key to their complex lives.

So, was this just a goody goody modern day take on Gandhi, non-violence, no alcohol and the rest? Not on your life—not when Gandhivaad becomes the cheeky Gandhigiri of Munna and Circuit. The Gandhi of Lage Raho Munna Bhai is not the historical figure we have been taught to revere for his unflinching moral strength. This Gandhi is like a grandfatherly genie, who appears any time Munna thinks of him "from the heart", and makes for a sympathetic confidant who makes tough decisions appear so simple after all.

It is interesting that in this film Gandhi’s identification is with the 20-plus generation, who are most likely to scoff at the Gandhi of their textbooks—that great but boring old man who said uh-oh to sex, no to drinking and seemed totally uncomfortable with any fun in life. The principles that Gandhians have sworn by become, in this film, hip concepts for getting the best of life. So, a young girl, who calls in to Munna to ask advice on how she should judge a prospective husband selected by her father, is advised by Munna, with Gandhi in the background, of course, to check out how he treats people who are socially inferior. And of course, the boy’s condescending treatment of a waiter in a restaurant seals his fate. Now that was quick and easy, and was it very far from Gandhi’s philosophy of the social uplift of the underprivileged (which is, of course, a much debated issue)?

The film works because it strips away the stiff layers of principle from Gandhi and makes available the very basics of his world-view. It acknowledges that Gandhi was a great man, who lived by his principles, but that we can’t all be great men like him —and neither do we want to. But what we do need is not to forget him and some basic truths that were as relevant in his time as they are today. So sitting in the police lock-up for staging a satyagraha in front of Lucky Singh’s house (when the easier option of just bashing him up was available) Munna and Circuit bask in their goodness and fantasise about the day when there will be their statues in parks, like Gandhi’s, their pictures on five hundred rupee notes, like Gandhi’s, roads named after them, like Gandhi, but not a dry day on their birthdays like on Gandhi’s.

For those one can already hear screaming at the film because of its cheekiness, its commodification of the great man and what not—let's just say this: Maybe the Gandhi of Lage Raho has more relevance to us today than the Gandhi in the books, whose only relevance seems to be that extra holiday he gets us. If this film makes Gandhi the flavor of the month—if people below the age of 40 have identified with even the very basics of Gandhi, courtesy Munna’s Gandhigiri, it can't be such a bad thing after all.

Even during the nationalist movement, Gandhi was appropriated by people at all levels and in ways that he himself had not bargained for —to the hordes of peasants who flocked to see him, he was Gandhi Baba, a sadhu with miracle powers who had set out to drive away the British. Had Gandhi lived today, he might have frowned at Lage Raho, or maybe —who knows.—he would have quietly smiled.

This film comes after a whole bunch of "patriotic" films in recent years where Gandhi figures as some kind of dithering weakling, who could have saved Bhagat Singh and his friends from the gallows, but couldn’t, or maybe just didn’t. This depiction had its own politics—the offshoot of a discourse that it was Gandhi’s philosophy of non-violence that made us weak and ill-equipped to hold our own in the modern world. In fact, Gandhi has pretty much been out of favor with under-40 Indians, because the Gandhi they know seems too good to be true, too arcane to be of any real use.

Statist discourse has mummified Gandhi making him inaccessible in a fast changing society. With its cheeky salutation, Lage Raho re-invents Gandhi for us—the Gandhi of 2006 India.

'I Wish I Had Become A Bio-Chemist'