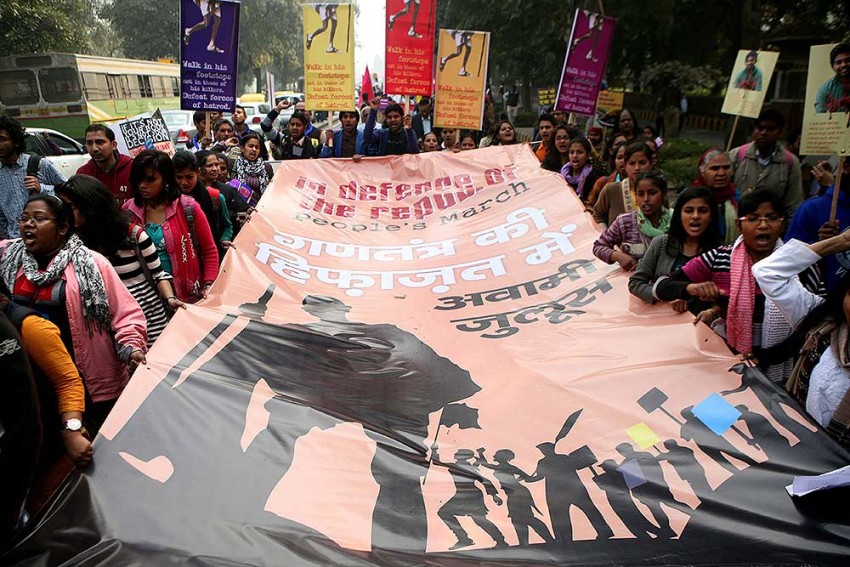 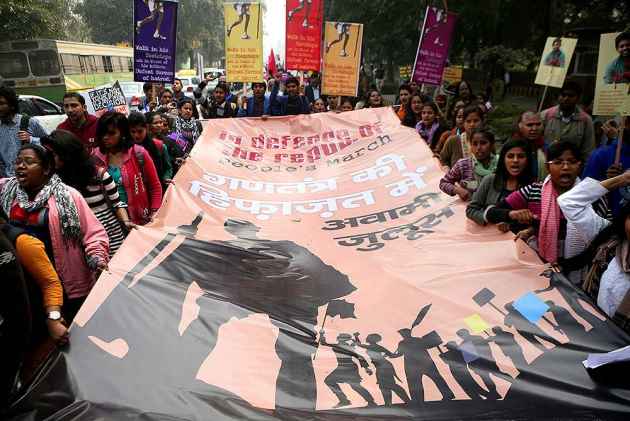 India celebrated its 67th republic day on January 26 with its trademark display of military might followed by the quaint Soviet-style flotillas showcasing the cultures of various states and territories. A few days later on January 30 the assassination of Mahatma Gandhi was commemorated across the country -- although there is an increasingly vocal section of society that chooses to commemorate his assassin as someone who saved India from Gandhi. These organisations had also marked January 26 and the ratification of the Indian constitution as a ‘black day’, deriding the secular nature of the republic.

For millennia ‘the republic,’ as a form of government, has been the subject of philosophical writings, revolutionary tracts, literature and films. A system of government in which the people’s power is supreme and the leader is elected or nominated, the idea of republicanism is itself contested. It was only apt then that a number of civil society organisations decided to march ‘in defense of the republic’ on January 30. Dozens of organisations representing a spectrum of associations, unions and collectives came together to march from Tansen Marg to Jantar Mantar, the road in the centre of Delhi where protests of all shapes and sizes often take place. 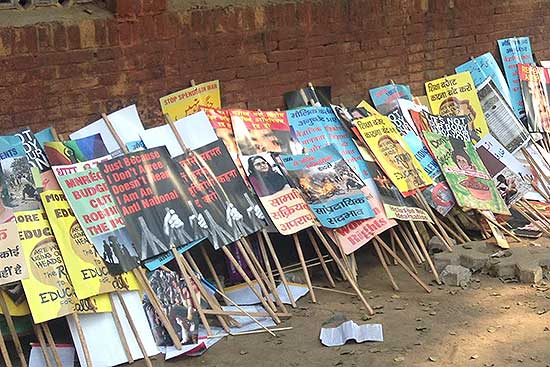 The venerable Justice Sachar, famous for the report he wrote highlighting the plight of minorities, flagged off the march. Heading the procession was a Dalit activist group carrying a photo of Gandhi, which in itself was an noteworthy step, as most Dalit organisations tend to use Ambedkar, one of the most important framers of the constitutions and a Dalit himself, as symbolic of their cause. Behind them were school children, gender activists, social welfare associations and a large and very visible group of Muslim men holding a large poster of Rohith Vemula, the young PhD scholar from Hyderabad University who committed suicide on account of the pressures he faced because he was from the ‘lower castes.’ Theories abound about whether Rohith was indeed a Dalit or not and what the truth of his story is but the fact remains that Rohith has been appropriated as a symbol by various groups who want to fight caste inequality.

At Jantar Mantar, past police barricades, a number of organisations and individuals were protesting causes dear to them. Colourful, diverse and noisy, the space is peculiar because on the one hand it facilitates those most controversial and yet fundamental rights -- the rights to dissent and freedom of speech -- while on the other hand it is a controlled and regulated space: a public space hidden from the public. It is interesting then, that the other protest that day in front of RSS headquarters in Delhi by students, also in memory of Rohith, was dealt with brutality by the police. Perhaps this violent response by the administration was because it was in a truly ‘public’ and therefore unregulated space. 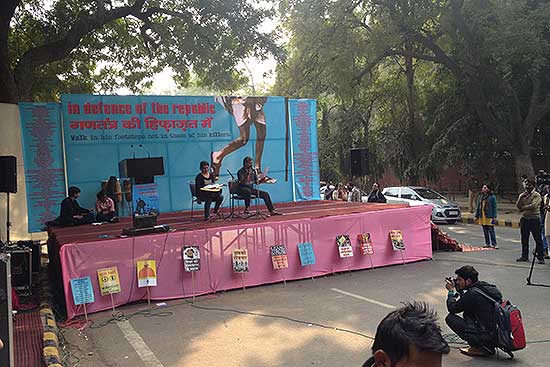 In Jantar Mantar the Army veterans, who were so much in the news, were still there on their relay hunger strike for more pensions while close by a group of Anna Hazare supporters sat with their trademark white caps while a card board cut out of the old activist took his place on the stage. Further ahead a solitary lady was protesting against her state government demanding a case to be lodged against her rapist, nearby a quirky gentleman was speaking on a hand-held mike about the need to abolish capitalism to a bunch of bored looking school children and a group of people were holding bright yellow and red placards demanding a CBI enquiry into the mistreatment of their ‘spiritual guru’ by their state government. Amidst this cacophony of crackling loudspeakers, each vying to be heard, herds of bemused spectators ambled around, while street food hawkers did bustling business and most importantly tea sellers, announced their presence with a guttural ‘Chaaaiii.’

Near the ‘People’s March’ space, various placards and posters in English, Hindi and Urdu were lined up near a wall. Young people sat on carpets and older people on chairs while enjoying the various programs that the organisers had put on. The backdrop to the stage was a photo of Gandhi’s striding legs and a caption urging people to ‘walk in his footsteps and not in those of his killers.’ To the side there was the giant photo of Rohith. A Dalit children’s group sang songs, another mimed about social injustices, poets read out their works and others did interpretative dance. The audience comprised of people from all walks of life and the odd cap-wearing Anna Hazare supporter seemed to have drifted accross, perhaps no longer interested in the cardboard cut-out of their leader. 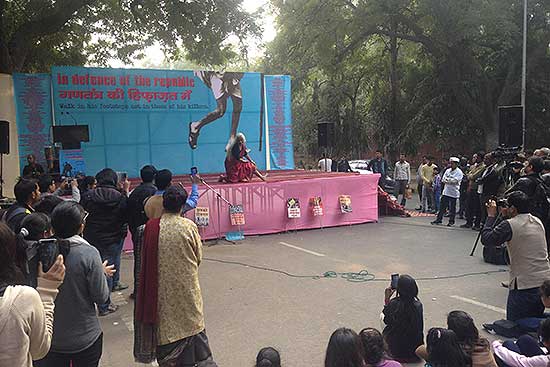 Owais Sultan Khan, the young social activist who was acting as compere of the event, marveled at the diversity of groups that had all come together ‘deeply concerned with the grave assaults that are being mounted on the Republic.’ However, apart from the common denominator of having some kind of grievance against the state, I did wonder whether this bewildering array of causes would have any other commonality. Was marginalization enough to truly unite people? Was unity always the best solution? The Frenchman Ernest Renan would have perhaps argued that suffering more than joy truly unites people.

Between the songs and dances, Dr. Syeda Sayidain came up to the stage and announced she would read Pakistani poet Habib Jalib’s famous poem, Dastoor (constitution). Jalib wrote the poem during Ayub Khan’s repressive years as a protest against a constitution that he saw as fundamentally exploitative. Pausing to explain some Urdu words, Dr. Saiyidain, an ex-member of the Planning commission, was accompanied by the audience when she recited the refrain mein nahin maanta, mein nahin jaanta- I refuse to acknowledge, I refuse to accept (the constitution). Maybe Jalib would have been pleased to see his work being recited in the heart of Delhi in order to lodge a protest against the manipulation and subversion of law. Faiz Ahmad Faiz, another famous Pakistani poet, had called Jalib ‘a poet of the masses.’

It was only appropriate then that across town in 24 Jorbagh, Faiz’s daughter Saleema Hashemi was speaking about an exhibition she had curated on partition for the Indian Art Fair. After saying how the voices of the artists from both sides of the border were ‘indistinguishable,’ perhaps because they both tried to articulate the suffering and human tragedy of partition rather than score cheap political points, Saleema Hashmi read out her father’s poem on partition ‘the dawn of freedom.’

Available at the event as a booklet in Hindi and Urdu script as well as in English translation, the poem lamented lost futures and bloody pasts while wearily urging travellers to ‘press on, for the goal is still far.’ It was strangely appropriate that two Pakistani poets who were victims of state repression in their own country were briefly remembered in Delhi on the anniversary of Gandhi’s assassination. Land can be divided and borders can be invented but language continues to transcend these man-made walls. Despite the fact that states try to create selective national memories, how can you partition the language of suffering?