Maintaining an attacking posture right through, the Latin Americans barely allow Germany to go on the offensive 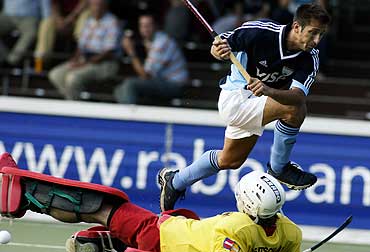 Argentina left nothing to chance and chalked up a fluent 3-1 win against world champions Germany in the 25th Champions Trophy hockey tournament at Amstelveen.

It was Argentina's first win in two matches, having lost 5-6 to Pakistan yesterday.

In the only match of the day, Argentina maintained an attacking posture right through and barely allowed Germany, who lost their first outing 2-3 against India, to go on the offensive.

The intense and ceaseless pressure told on the Germans who added to their woes by missing a second-half penalty stroke when Alexander Sahmel hit the cross-piece.

The game exemplified modern day hockey with tight man-to-man marking and very little individual play. However, on the few occasions when the German defence lapsed, allowing space to the Argentine forwards, the goals materialised.

Jorge Lombi converted a fifth minute penalty corner to put Argentina in front. On change of ends, Mario Almada steamed in from the left on a Mattias Paredes pass and as he flicked a pass past the advancing goalkeeper, the ball got deflected into the goal off a defender's stick.

A minute later, Germany, who are fielding a development team in this elite six-nation tournament, had their best scoring chance when Argentine goalkeeper Juan Manuel Vivaldi stick-checked Benjamin Kopp, leading to a penalty stroke.

However, Samhel hit the cross-piece.

The Germans were punished for the lapse when Lombi converted yet another penalty corner in the 58th minute to put the issue beyond doubt.

Germany finally managed to pull one back five minutes before the hooter as Niklas Meinert found the target from a rebound following a swift right wing move.

Though the world champions intensified the attack in the last few minutes, the Argentine defenders and the goalkeeper managed to thwart the onslaught.

Germany, who played brilliantly against India, looked quite lacklustre against Argentina with their forwards lacking sting and the defenders failing to impress.

Argentina, on the other hand, playing an attacking game from the word go with the strikers, ably supported by the behind players, made continuous inroads into the German area and created several opportunities.