Only two Indian batsmen had outings in Lahore and the middle order still lacks match practice. But the Pakistani bowlers have an uphill task of preventing the flow of runs from Sehwag's wood. 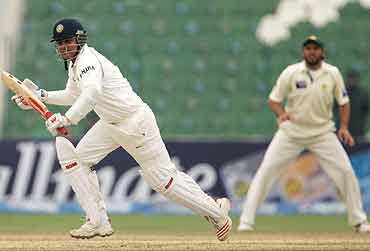 The Pakistan bowlers can draw advantage from the fact that only two Indian batsmen had outings in the first Test in Lahore and the middle order still lacks match practice. But they have an uphill task of preventing the flow of runs from Virender Sehwag's wood in the Faisalabad Test.

The solution, apparently, is simple but the execution is difficult -- bowl as straight as possible to Sehwag and frustrate him by not allowing him to free his arms.

Sehwag is a batsman who likes to hold the bowlers by the scruff of their necks but he has also shown over the years that if he fails to penetrate into the opponent's bowling, he throws away his wicket with a silly stroke. So the best bet for Pakistan is to not allow him to score easy runs and wait for him to repeat that silly mistake.

At last, we are having bright sunshine in Faisalabad for the last couple of days and lets all hope that it remains like that, at least, for another week so that we can have a good Test match.

Nevertheless, I still believe we will not have 90 overs in a day as there will be early stumps every day. This means that the action has to be quick and fast so that there is a result.

Both the teams have class stroke-makers who like to score at a brisk pace. So, I don't see any reason why the scoring will not be fast. The only factor that is still unknown is if the two bowling artilleries are capable of dismissing the opponents twice in a match.

Comparing the two bowling attacks after the Lahore Test, I still believe Pakistan looks more resourceful in its bowling department not only because of the variation they have, but also for the simple fact that they bowled in patches while the Indian bowlers bowled on a trot.

When there are interruptions like the ones we had in Lahore, it becomes more difficult for the bowlers, and especially for the quickies, than batsmen. The pacers need to regroup, recompose and readjust their line and length every now and then, and consequently it also becomes taxing on their bodies.

The Indian bowlers can look back at the Lahore Test and proudly say that they bagged seven Pakistan wickets on that placid track. But lets also accept the harsh reality that the last two Pakistan wickets (Shahid Afridi and Rana Naved-ul Hasan) fell while Pakistan were scoring at a phenomenal rate.

Besides, there were two run-outs (Salman Butt and Younis Khan) which means only Shoaib Malik, Mohammad Yousuf and Inzamam-ul Haq's dismissals can only be attributed to good bowling.

In this background, we are still on square one as far as the forms of the bowling attacks is concerned.

On past record, I will put my money on the Pakistan bowlers although I would like to see young Mohammad Asif play instead of Mohammad Sami who has been disappointing for the last year or so.

Also, I would love to see Shoaib Akhtar try more yorkers than he attempted in Lahore for the simple reason that if the wicket is not assisting you, then you should rely on your natural ability of being quick in the air.

Of course, for effective yorkers, you also need some reserve swing but even then yorkers, as Wasim Akram and Waqar Younis proved, remains the most lethal weapon for genuine pacers.

The wicket, as I have heard, looks soft with a brown top which means it can be deceptive. It can be another batting paradise but don't forget that on a similar track, the West Indies were dismissed for under 55 by Abdul Qadir. The curators say pitch preparations have been hampered by the weather, but have two sunny days done any good to the pitch or would it be an under-prepared track?

On these type of unpredictable pitches, the toss becomes extremely vital and any captain making the right call will have little hesitation in making first use of the wicket to avoid batting last on a deteriorating pitch.

But while saying this and believing that the wicket is soft, the first session of the Test would be crucial.

I also believe that there will be pressure on both the teams as it is now practically a two-Test series while Lahore can be considered a warm-up game. As a die-hard cricket fan, I would love to see a result in this match because then it would be a cracker in Karachi. Let's all hope that the two teams produce the game they are best known for.

The Ground Beneath Their Feet