In the last assembly polls, the Congress had a vote share of 36.5%. This gave the BJP the confidence that it could be a strong opposition. The BJP then started working on taking over the Opposition space. 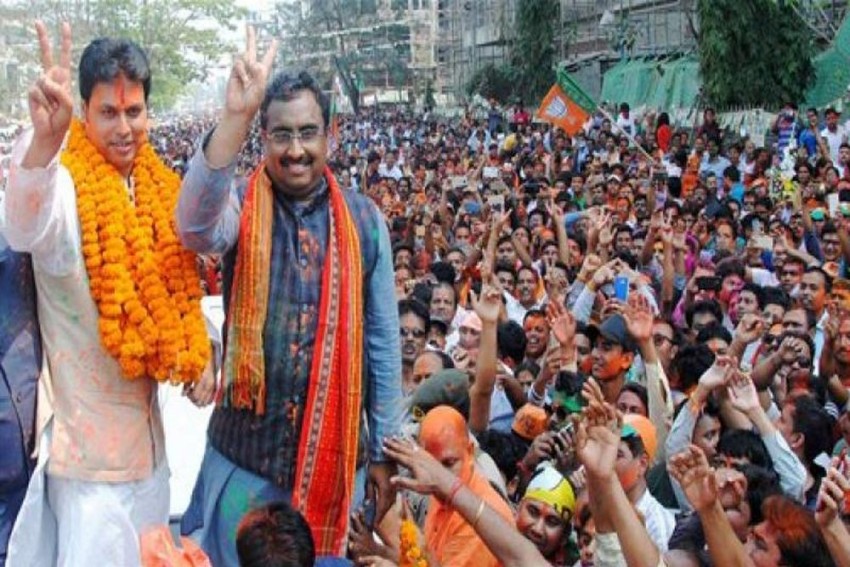 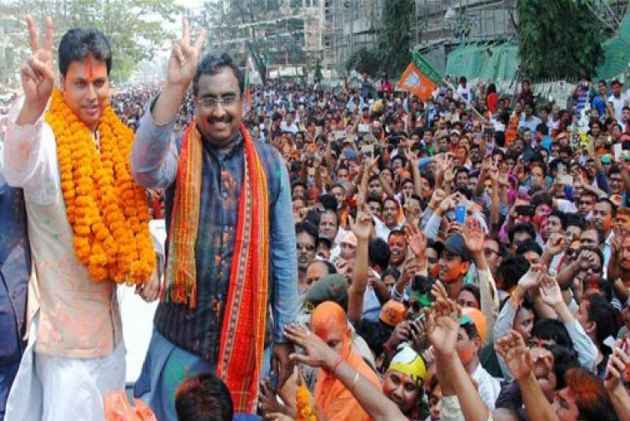 When the Bharatiya Janata Party (BJP) decided to distribute tickets to its candidates before the Tripura assembly polls, its party president Amit Shah was surprised to find out that many of them were too young. The party was unsure if several of them had even crossed the age of 25 years, the minimum age to contest Lok Sabha or assembly elections. Eventually, the party had to verify their birth certificates before handing them over the tickets, said Prime Minister Narendra Modi while addressing BJP supporters from the party headquarters after the Saffron party’s remarkable victory in Tripura on Saturday.

Many in the national capital watching his speech could relate to what they had witnessed three years ago in Delhi. The BJP’s historic victory in Tripura is nothing short of the Aam Aadmi Party’s landslide win in Delhi.

With nearly 47,000 first-time voters out of a total of 25,36,589 in the Tripura assembly elections, which took place on February 18, the youths have been a significant segment in this polls. In the last assembly poll, Tripura had a sizeable 17% youth vote. This time, the youths in the state were unambiguously tilted towards the BJP.

For the party, the win in Tripura has been the “sweetest after a bitter territorial battle” with the deeply entrenched Left Front, led by the CPI(M). The BJP got a vote share of 43% to win 35 seats, a huge leap from the paltry 1.54% it could manage in 2013.

So, how did the BJP manage to woo people in the bastion of the Communist Party of India (Marxist), which had been in power for 25 years?

According to Hindustan Times, the BJP first sensed a chance in the state during the 2014 general elections, in which it increased its vote share and tally threefold compared to 2009. The Congress and the Trinamool Congress together had polled 5 lakh votes. In the last assembly polls, the Congress had a vote share of 36.5%. This gave the BJP the confidence that it could be a strong opposition. The BJP then started working on taking over the Opposition space.

The anti-incumbency factor also worked against the CPM. The Left government in Tripura failed to understand that the aspirations of people had changed and voters wanted benefits of development to reach them. The credit for the victory goes to mainly four men of the party -- Himanta Biswa Sarma, Sunil Deodhar, Biplab Kumar Deb and Ram Madhav.

Former Congress leader Sarma joined the BJP in 2016 and soon helped the party win Assam in April that year. Impressed by his performance, party president Amit Shah deputed Sarma for other northeastern states, including Tripura. Deodhar, a RSS leader, along with Deb, who could be the next chief minister of state, had been working since 2015 to expand the party’s foothold in the state. Deb was promoted as the party chief in January 2016.

Madhav, the party’s northeast in-charge, also worked on expanding the BJP’s base.

The BJP leaders then started approaching leaders from the Congress and the TMC for a possible changeover. The Indian Express reported that in the run-up to the election in Tripura, the Congress was faced with a serious divide after seven legislators left the party to join the TMC. The party which won 10 assembly constituencies in the 2013 elections, currently has managed to get a vote share of less than 2% this year. In a major boost for the BJP, the legislators quit TMC and joined the BJP in August 2017.

“The role of the RSS is also important in this victory. Some of the senior workers were sent to BJP to work in Tripura. Sunil Deodhar who is the incharge of BJP in Tripura is also a pracharak who was handpicked by Modi and BJP president Amit Shah. Deodhar had handled Varanasi for Modi in 2014 Lok Sabha elections,” the BJP leader told the newspaper.

HT reported that the BJP also reached out to tribal groups and stitched an alliance with the Indigenous People’s Front of Tripura (IPFT). The Left had won 19 out of 20 assembly seats reserved for the scheduled tribes in 2013 and the BJP wanted to break this monopoly. The gamble paid off and the BJP, with the IPFT, swept the tribal belt.

Like in almost every election since 2014, Prime Minister Narendra Modi continued to be the BJP’s primary vote gatherer. Modi himself held four rallies in Tripura in the run-up to the election. Other leaders like Shah and UP chief minister Yogi Adityanath too reached out to people in the state. The BJP deployed 52 union ministers in Tripura during the campaign.

“No matter what the critics say, the fact is that Prime Minister Narendra Modi has tremendous connect with the people who think that he is the man who can deliver. His intent and integrity is unquestionable. There is no doubt that Modi works hard and people realise that,” said a senior BJP leader in Delhi told Mint.

Beef Not An Issue for BJP, Focus Is On Development, Says Kiren Rijiju In An Interview