The exchange of fire between the militants and the security forces resumed at day break, a CRPF official said. 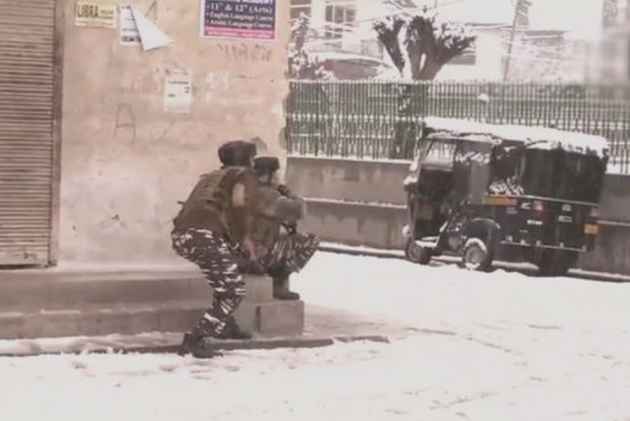 Mopping up operations were under way at a building in Srinagar's Karan Nagar area with security forces killing two militants, officials said on Tuesday.

The encounter between militants and security forces, which began on Monday after the ultras tried to attack a CRPF camp, resumed on Tuesday morning after an overnight lull.

The identity and group affiliation of the slain militants were not immediately known.

Security forces had launched a final assault on the militants hiding in an under construction building in Karan Nagar area in the morning, officials said.

Officials said the security forces were preparing for a final assault on the militants when they opened firing.

A CRPF jawan was killed and a policeman was injured in the exchange of fire on Monday.

The incident came days after Jaish-e-Mohammad (JeM) terrorists attacked another Army camp in Sunjwan area of Jammu, killing six people including five soldiers. Three militants were also killed in retaliation by the Army.

Defence minister Nirmala Sitharaman on Monday said Pakistan was resorting to ceasefire violations to assist infiltration and asserted that Islamabad was expanding its "arc of terror" to areas south of the Pir Panjal Range in Jammu region.

Sitharaman, however, said infiltration across the LoC had ebbed due to the deployment of the anti-infiltration obstacle system (AIOS) and a dynamic multi-layered counter infiltration grid.

"Pakistan is expanding the arc of terror to the areas south of Pir Panjal Range (Jammu region) and resorting to ceasefire violations to assist infiltration. These are being responded appropriately," Sitharaman, who arrived here to take stock of the situation following the attack on the Sunjuwan Army camp, told reporters.

She said that security along the LoC was further being beefed up with electronic surveillance equipment.

"With a view to enhance alertness along the borders, additional sensors, unmanned Aerial Vehicles (UAVs) and long range surveillance devices have already been deployed to cover the entire frontage of the LoC," she said.

The minister said terror activities in the hinterland were being controlled.