The fight for survival in a flooded Chennai. 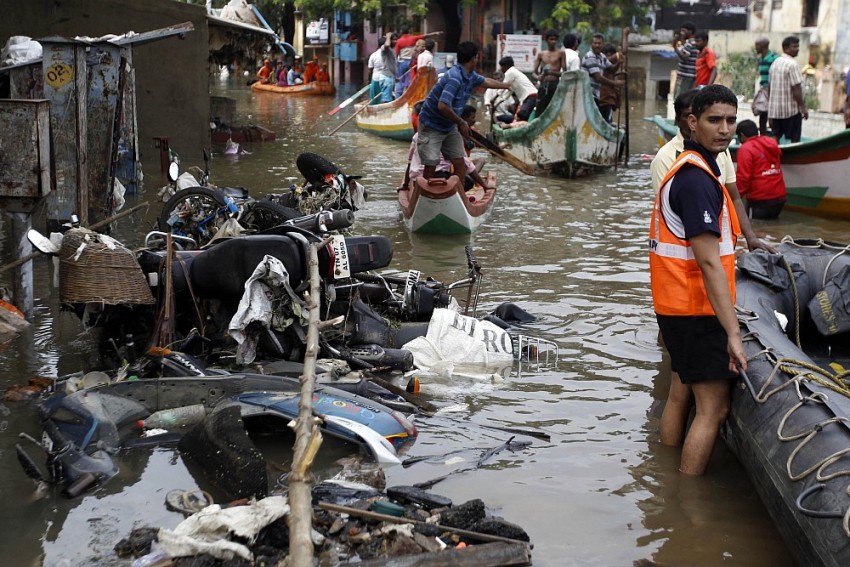 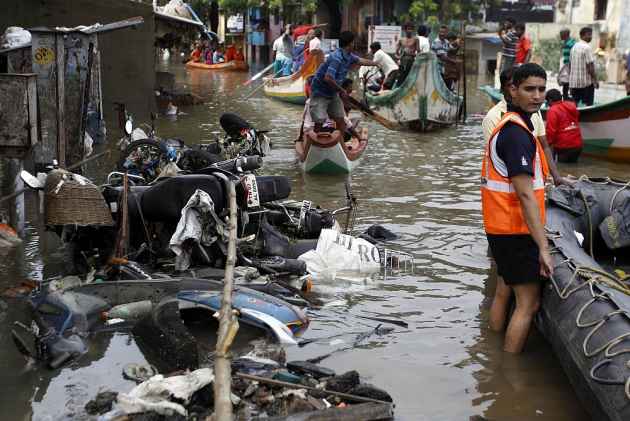 The days were dark…with 80 per cent of Chennai, we were told by friends in the media, going without power. The silence was eerie, broken now and then by vehicles splashing through the puddle outside and by the increasing ferocity of the rain that poured with the rising sound of a murmuring crowd in a stadium.

This was for people who stayed put at home. For others it was hell that came with high water.

Residents of CIT Colony in Tambaram, a southern suburb of Chennai, were marooned on the terrace of their apartment blocks, according to Dayan Selwyn, a musician who lives in Chetpet in Central Chennai, which was relatively less affected.

Selwyn said "My cousins are stranded with the water almost reaching the second floor…it is difficult for any one to reach their building. They are hoping the army will rescue them."

For K S Meenakshisundaram, a former journalist who teaches at Asian College of Journalism, it was two to three feet water in his ground floor apartment on Valmiki Street, Thiruvanmiyur. The street itself was down in a waist-deep pool.

"The fridge tumbled on its side and started floating…my television set, mounted some five feet high on the wall was untouched," said

Meenakshisundaram, who took refuge in his neighbour's first floor flat after retrieving some important documents and some clothes to wear. Water in the ground floor was a common story by Wednesday morning.

The road on the northern side of the Journalists Colony off the East Coast Road in Thiruvanmiyur gets flooded in the slightest of downpours. This time the flood waters entered the houses from both sides of the road and even the inner roads of the colony were flooded. By Thursday morning, it was a black pool of sewage and rainwater.

Anandi Chandrasekar, a student of Asian College of Journalism, was stuck on the first floor of her apartment block in Nanganallur, south Chennai. She said she was unable to go out for groceries because water had entered the ground floor.

"Things are worse in Velachery…my friends say there is water up to the first floor," she said.

Velachery is often cited as a prime example of what happens when catchment areas are converted into housing sites. The area gets flooded almost every time it rains heavily.

In an apartment block in Anna Nagar, west Chennai, people, with bare necessities packed in a bag, slowly climbed down from the first floor of their building on to rafts made of empty drums. They were then ferried to dry spots by men, neck-deep in water, pushing the rafts.

Susila, a housemaid, just took her LPG cylinder and stove and took refuge in a school in Palavakkam, a locality down south that straddles the East Coast Road. Her husband, two daughters, son-in-law, son, daughter-in-law and three grandchildren are camping in the school along with hundreds of others. Her house in one of the lanes off ECR is in neck-deep water.

"They give us food three times a day… tamarind rice, sambar rice… so we are comfortable," Susila said adding that they had also given them a bed sheet. But she is not clear who the "they" were…whether they were State Government officials or volunteers from some NGO.

People on Facebook and Twitter chipped in with offers to shelter "stranded" people and even their pets. A website chennairains.org listed the locations, contacts and offers that ranged from halls that could shelter 100 people to houses that could take in two or three people.

As the rain pounded the city Tuesday (December 1) Sharath Soundararajan, who works for a BPO in Perungudi off Rajiv Gandhi Salai, was waiting for a cab to pick him up for work. The only problem was that all access to his apartment block in Parameswari Nagar in Adyar was flooded.

"The rain has flooded the ground floor and I have to wade through waist-deep water for some distance to reach the main road," he said wondering how he could get to office.

The December 2 Chennai edition of the Hindu newspaper could not be printed because its staff could not reach the press at Oorapakkam in Maramalinagar on the Grand Southern Trunk Road (National Highway No 45) a busy road that connects Chennai to the southern parts of Tamil Nadu. The road was cut off because of inundation.

But the Hindu's loss was no one's gain because there was no sign in some areas of the other three English-language papers published in the city — the Times of India, Deccan Chronicle and the New Indian Express — probably because the delivery boys decided to stay away.

On Wednesday (December 2) all the three bridges across the Adyar river that connect North and South Chennai were closed to traffic. Water was said to be flowing over the bridges at Saidapet, Kotturpuram and Adyar.

While offices and banks had become inaccessible, ATMs went on the blink with no back-up power supply. Grocery shops refused to accept debit or credit cards and insisted on cash. Not only that, food vanished off the shelves.

"We don't have bread…we will not get them for another two days… sorry madam…no water cans…no more candles," the boy manning the counter at a store on ECR told a woman who was visibly getting upset with each "No".

For some there were other things on their mind.

Srinivasan Seshadri, an advertising consultant, was all set for a holiday in Singapore with friends. On December 1, he reached the airport at 6 pm taking four hours for what would normally be at best a 45 minute trip from his house in Thiruvanmiyur.

The two or three hotels in the vicinity of the airport were full with passengers from other cancelled flights.

Srinivasan declined the offer to be bedded in the hotel hall and decided to spend the night at the airport. In the morning, he made his way out and the only taxi driver there demanded Rs 5000 for a trip that normally costs around Rs 300. Luckily, he shared the fare with two others who were headed in the same direction.

The airport had been shut down in the night.

"When I saw it in the morning, it was a lake on the tarmac with some bushes floating around," he said.

On December 1, Rohan Sen, lead singer of the Chennai-based rock band Grey Shack, messaged friends on Facebook asking for a ride to the airport the next morning. His message was met with the picture of an aircraft standing amid a vast stretch of water and updates that the airport was shut down.

The picture was posted by Shabbir Ahmed of Times Now who frequently updated people with news about the weather and its effects.

There was no flight on December 2 morning.

"We have rearranged it for December 3… we still have enough time… we will make it," Sen said about his band's impending performance at the Hornbill International Rock Contest as part of the ongoing Hornbill Festival in Nagaland.

There was no flight on December 3 morning.

So the band drove to Bangalore because the National Highway 4 was not flooded and again drove to Hyderabad because the flight ticket was a prohibitive Rs 38,000.

Vikram Vivekanand, the band's lead guitarist, wrote on Facebook, "Our journey to Hornbill this year has been quite an adventure, to say the least! We're now in Hyderabad, waiting to board our flight to Calcutta, and on to Dimapur, but it's been quite a harrowing experience!"

Lull Before The Storm