Hazare's agitation was critical and timely. His basic demand to have the civil society suggestions in redrafting the Lokpal Bill was valid. But haven't we invested too little of ourselves in the battle and too much in one man? 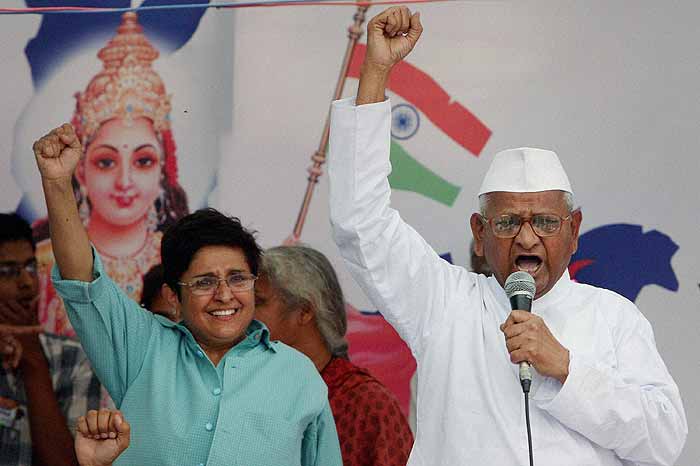 Now that there is relative sanity and reasonable distance from the Jantar Mantar spectacle led by social activist Anna Hazare, replicated in a dozen Indian cities, and a number of critiques — and critiques of critiques — written, read and re-tweeted, it’s time we posed a few questions — to Hazare, the government and ourselves.

Gandhian philosophy — not necessarily the variety that saw a sudden resurgence on April 5th at Jantar Mantar and amassed new converts in five days — demands that we must, always and above all, look within. Hazare's agitation was critical and timely, his demand was that the Lokpal Bill pending 42 years in the Parliament must be re-drafted with civil society suggestions so that the institution, when it comes into effect, will have teeth. Do we need the Lokpal? Of course, yes. Do we need the Bill? Yes. Do we need Hazare's version of the Bill? Perhaps not. The relentless unforgiving searchlight that Hazare focused on the government, indeed politicians in general, must be trained on the questions that arise post-Jantar Mantar.

1. Now that we have successfully outsourced our campaign against corruption to Hazare, can we focus on ourselves?

People who had never been to a protest before in their life drove to Jantar Mantar or Azad Maidan or Freedom Square or whereeverelse to lend muscle to a man they might have dismissed earlier. It was heartening for someone who has covered agitations for 20 years to see this minor, though euphoric and exciting, groundswell. It’s what protest-leaders hope for. Hazare, undoubtedly assisted by an obliging 24x7 news media, managed to elicit that reaction and support.

He was helped, in no small measure, by a largely apathetic, uninterested, non-participative, citizenry that wanted to "do something about corruption" beyond drawing room chatter, Facebook updates and tweets last few months. Since the 73-year-old self-proclaimed Gandhian chose to take the battle against corruption right into the heart of India’s polity, perceived as the most corrupt pillar of our democracy, all that the disgusted citizenry had to do was merely come out in support of Hazare. The battle itself had been successfully outsourced.

Outsourcing is a funny thing — it makes each of us feel like the doer, the karta, yet we do not have to do anything very difficult ourselves. It takes the responsibility off the karta but leaves him/her feeling powerful about the act itself. Every one who called the telephone numbers of India Against Corruption (IAC) to register support or visited the protest sites or blogged/tweeted/facebooked believed they had done their bit. Jingoistic television anchors called this a revolution or second freedom movement or something similarly lofty. Neat revolution this, neatly outsourced too. Revolutioneering was never so easy, so bloodless, so non-subversive, and so hypocritical.

Now that its behind us, can we make necessary changes in our mindsets and habits to root out corrupt practices from our lives? Will each soldier in Hazare’s army refuse to give the traffic cop a good-looking currency note when caught for traffic violations, or refuse baksheesh to obliging clerks in government offices, or not ask sisters’ colleagues’ wife to put in a word for school admission, or not file fake bills to claim legitimate allowances, or not buy our second home in a created hill station where corporates and politicians cheated farmers of their land, or not seek free passes to the next IPL match, so on and so forth? Such responsibility cannot be outsourced.

2. Can the Lokpal be the one-stop-solution for all corruption at all times?

We have legal provisions to address and prevent corruption, we have an impressive list of institutions for the job, but neither has deterred corrupt practices. Will one more law help? This one may, because the existing system of investigation-justice cannot or does not bring the wealthy and powerful to book. But having a Lokpal or Lokayukta does not, in itself, tantamount to getting rid of corruption. This is like saying: we have laws to deal with rapists or sex traffickers, so we won’t have rapes and sex trafficking. Clearly, much as we need the law, we also need other measures to tackle the menace.

Having a Lokpal -- not toothless as in some states or as in the government's own draft -- does not mean that we accept the Jan Lokpal Bill put out by Hazare and the IAC core group. This Bill flags off some concerns. One is the nature of the IAC draft itself. When we put in place a new law and institution, should it not be subject to reasonable restrictions usually prescribed in a democracy? Of course, those occupying high offices, such as Prime Minister, high court and Supreme Court judges have to be brought into the ambit of anti-corruption measures but it doesn’t mean creating a new authority or institution that’s undemocratic at worst and dictatorial at best. Another concern is that natural scepticism about this draft was considered as anti-Hazare heresy. Being anti-corruption surely did not have to mean pro-Hazare or pro-this-version-of-Bill. Commitment to democracy demands that all proposals and laws are questioned, even when drafted by well-meaning crusaders.

3. Has the government, indeed the political class, finally woken up to the fact that it is supposed to represent people? Or has it merely yielded some of its space in the Constitutional set-up?

Parliament is meant to legislate. My representative is supposed to reflect my voice. But when a candidate can get elected to the Lok Sabha with barely 30 per cent votes from a constituency, my MP or MLA could be a token one. Who then represents me, who voices my concerns? If he/she is suspected of corruption, where do I head for relief? What can I do when compromised bureaucrats escape the law merely because permission for their prosecution is not granted? When judiciary is itself battling corruption charges, who will judge corrupt politicians or bureaucrats? Democratic institutions were found wanting on the issue of battling corruption because men and women who make these institutions were found gravely wanting themselves. Their limitations and vested interests became institutional limitations.

Civil society — plural, heterogeneous, chaotic, somewhat flawed — took on the institutions. This time around, civil society leaders demanded a say in framing law, and got it too. Those who garner support from citizens, and demonstrate that from time to time, earn the privilege of representing us. Fair enough, but squeezing into the legislative process is potentially damaging to both sides. The power and force of civil society cannot but be compromised while the legitimacy and sanctity of elected representatives gets further eroded.

Hazare’s crusade was a wake-up call to political representatives, bureaucrats, and judiciary that citizens are agitated about corruption. Sitting on the legislative process means Hazare and his group have abdicated their right to criticize the Lokpal Bill draft that will be prepared by the joint committee. Now, if non-Hazare sections of civil society find problems in this draft, will Hazare listen and re-draft the Bill? Should this process continue, where and how will it end? If Maoists demand a joint committee to re-draft the Forest Rights Bill, and pressure the government through violent methods, will we have cabinet ministers sit alongside Maoist commanders and do the needful?

4. Will the real Anna Hazare please stand up?

India, outside Maharashtra, discovered a man called Anna Hazare. Enough has been said about his use of religious symbols and men, his references swinging from Mahatma Gandhi to Chhatrapati Shivaji, the allusion to sindoor, his feudal-cum-military style development-governance model in Ralegan Siddhi. His impact on the village is indisputable. His work to bring the Right to Information law into existence cannot be denied. Yet, as someone who has tracked his work and seen his agitations up close for years, there’s disquiet. Two anecdotes need to be told.

The first is the most recent one. On his way back to Ralegan Siddhi this week, Hazare had to pass through toll nakas on the Pune-Ahmednagar highway. Toll collection agencies are on his hit-list for their corrupt practices. Hazare’s convoy of cars and SUVs sought to pay toll but were waved ahead by toll booth attendants who recognized the new national icon. Hazare could — and should — have insisted on paying but gladly moved on. Did he allow his position to attract undue favours? Isn’t this corruption too? In his address at Ralegan Siddhi, where he gloated that he “made Delhi bend”, he remarked: “We now know the art of squeezing the government’s nose to open their mouth” (sic) displaying his contempt for all things governmental. Yet, as Mumbai lawyer, anti-corruption campaigner and former IPS officer YP Singh has pointed out, Hazare has been happy to use state government facilities, including guest houses and red-beacon cars; he has used secretariat offices for his work and has had government officers report to him in the chambers of chief ministers. This, Singh points out, is neither democratic nor activist-ic. Singh alleges that Hazare sought from him all files and details on two big-ticket cases of corruption — Adarsh society and Lavasa hill station — but did nothing; Hazare’s aides said he studied the cases.

The second tale is older. Many who supported Hazare last week were shocked that he held forth on unrelated subjects -- development work in Gujarat and Bihar, capital punishment for corrupt politicians, and so on. He could have refused to answer reporters' questions on these matters, but this is typical Hazare. He loves to be centre-stage, revels in the attention he gets, is willing to expound? on any subject and believes supremely in his own intellect and high morality. The last bit would be fine if he did not consider everyone else to be a notch lower. The incident that captures this best happened in 2003-04 when he had taken on four Maharashtra cabinet ministers on charges of corruption, leading to the setting up of Justice (retd) PB Sawant commission of inquiry and the resignations of these ministers. At that time, information surfaced about government grants to Hazare’s Hind Swaraj Trust and how its accounts had not been audited. Asked about this at a press conference in Mumbai, Hazare was livid; he demanded to know how anyone could point accusatory fingers at him or question his conduct. He did not provide answers. The next day, he held a press conference in Pune — more home-ground than Mumbai — to rave and rant that mainstream media had sold its soul to corporate interests. It’s the same media that he thanked in his just-concluded agitation.

All this begs a final question: in our quest to find the final solution to all corruption, particularly corruption in high places, have we as Indians invested too little of ourselves in the battle and too much in one man?

'Understand The Spirit Of This Movement'