"Both governments have agreed to allow travel across the LOC between Srinagar and Muzaffarabad by bus. Travel will be by an entry permit system, once identities are verified .... The bus service is expected to commence from 7 April 2005" 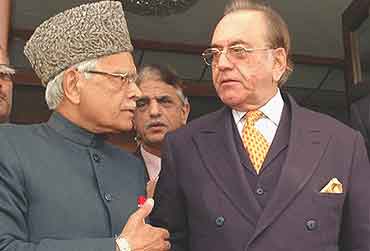 Natwar Singh: I have just concluded an extremely useful and intensive discussion with my distinguished colleague and friend, the Foreign Minister of Pakistan. H.E. Mr. Khurshid Kasuri, I want to thank you for your hospitality.

3. I have come to Pakistan for the first bilateral visit of the External Affairs Minister of India since 1989. I have also come at a stage in the present process between our two countries when significant positive developments have taken place over the past one year. At the same time, it was also felt that continued appropriate political interaction would inevitably impart further momentum to the process.

4. I am happy to be able to share with you that we have been able to take several significant further steps:

(i) We have agreed between us on mutually acceptable procedures for establishing a bus service between Srinagar and Muzaffarabad.

(ii) We have also agreed to look at a pipeline through Pakistan subject to satisfaction of our concerns related to security and assured supplies;

(iii) We have instructed our officials that in the forthcoming series of meetings between now and July, agreements be finalized on Pre-notification of Missile Tests, MOU between Indian Coastguards and Pakistan’s Maritime Security Agency, and MOU between Narcotics Control Authorities;

(iv) We have agreed between us to start a bus service between Amritsar and Lahore, and also to agreed religious places such as Nankana Sahib and we have instructed our officials to immediately tie up the technical details;

(v) It was also agreed that discussion would be initiated on agreements on:

(a) Reducing Risk of Nuclear Accidents or Unauthorized Use of Nuclear Weapons;

(b) Preventing Incidents at Sea.

5. We have agreed to consider further measures to alleviate the situation of civilian prisoners and apprehended fishermen. I impressed upon His Excellency the Foreign Minister of Pakistan the need to release the apprehended fishermen along with their boats, and to expedite their return.

6. I also conveyed to my counterpart our readiness to start the Khokrapar-Munnabao rail link from October 2005, and requested Pakistan to expedite their own preparations. We are continuing with our efforts for early re-establishment of our respective Consulates General in Karachi and Mumbai.

7. Both of us are looking forward to the first meeting of the Joint Study Group on Trade and Economic Cooperation at the level of Commerce Secretaries scheduled for February 22-23, 2005 in New Delhi.

8. As you can see, we have come a long way over the past year or so. As I stated yesterday, I am convinced that cooperation between our two countries is not just a desirable objective; it is an imperative.

9. My visit has reinforced in me the determination to continue working for expanding cooperation and understanding between our two countries. The people of both our countries clearly desire it.

10. No doubt, we have differences between us. This is only normal given the history and complexity of our relationship. However, as leaders, it is incumbent upon us to find ways through which we can enhance trust and cooperation, so that the differences can be addressed more productively.

11. Of course, the process can be sustained only in an atmosphere free from terrorism and violence, in the framework of implementation of commitment made on January 6, 2004.

12. I have invited my colleague, the Foreign Minister of Pakistan to visit India to continue with these efforts. I look forward to welcoming him.

Khurshid Kasuri: I had a useful exchange of views with His Excellency Mr. K. Natwar Singh, External Affairs Minister of India.

Talks were held in a cordial, frank and positive atmosphere.

We had the opportunity to constructively review the status of our bilateral relations as well as the regional cooperation under SAARC.

We have agreed to work together for the early convening of the 13th SAARC Summit.

We have noted with satisfaction the over all improvements in atmospherics between the two countries. We have taken positive steps that auger well for the future of bilateral relations. We are strongly committed to carrying forward the Composite Dialogue process to make it productive and fruitful.

We had discussions on the core issue of Jammu & Kashmir and have impressed upon the Indian government for an early and final settlement of the issue in accordance with the aspirations of the people of Kashmir.

We discussed issues of Peace & Security. Pakistan expressed the hope that both the countries will be able to move forward to promote strategic stability in South Asia.

The Prime Minister of Pakistan has already instructed our Railway authorities to expedite the early operationalization of Khokhrapar-Munabao rail link.

We hope that the Joint Study Group meeting at the level of the Commerce Secretaries to be held in New Delhi from 22-23 February 2005 will come up with recommendations which will be mutually beneficial to both countries.

The Indian Government has agreed to lease a government-owned building and a plot of land in Mumbai for simultaneous opening of Pakistan’s Consulate at Mumbai and Indian Consulate at Karachi.

We held discussion on the Siachen issue. It was agreed to direct the Defence Secretaries of the two countries to discuss the issue in a friendly and cooperative manner. I hope that the issue will be resolved in accordance with the understanding reached earlier.

The issue of detained fishermen and civilian prisoners is an humanitarian issue. We have agreed to work out a mechanism for their early release following a summary procedure. Civilian prisoners and detained children who have completed their prison term may be released at an early date.

We have noted with satisfaction the Indian decision to treat the Gas Pipeline project as a stand alone project. We hope for the early finalization of an agreement.

We also held discussions over the Baglihar and Kishanganga projects. I impressed upon my Indian counterpart for an early resolution of the issues in accordance with the Indus Water Treaty.

The two Foreign Ministers took note of the joint survey conducted by the two countries on the Horizontal segment of the Blue dotted line in the Sir Creek area and express the hope that the issue would be resolved at an early date.

The two sides have agreed to continue the Composite Dialogue process in positive spirit and for constructive results in addressing all issues including Jammu & Kashmir, Peace & Security, conventional and nuclear CBMs, trade and people-to-people contacts.