As with any Scotch whisky, a single malt Scotch must be distilled in Scotland and matured in oak casks in Scotland for at least three years and one day.

Ask any whisky drinkers what type of spirit they prefer and single malt will almost certainly be the answer. So, what is it about the alcohol that makes it so revered?

To understand it better, we got in touch with David Turner, Distillery Manager at Bowmore. He tells us about the basic difference between whisky and scotch, the importance of using the right glassware and ice, and much more:

Difference between whisky and scotch

The main difference lies in geography, ingredients used, and the maturation process. Scotch is made from malted barley and is produced in Scotland. Scotch must be aged for at least three years in oak containers and distilled and bottled at a minimum of 40% alcohol. Whisky on the other hand is a distilled spirit that usually uses barley and/or corn. It has much higher levels of alcohol and the colour is amber-like because it is distilled in wooden casks for a long maturation process.

What makes one scotch different from another?

Scotch whisky is divided into distinct categories. Starting with single malt, which is a product of a single distillery made from malted barley, and blended malt, which contains two or more malts made in different distilleries. Moreover, there is single grain produced with malted barley and one or more grains as well as blended grain which is made from two or more single grain whiskies in different distilleries. Lastly, a blended Scotch is a product of at least one single malt blended with at least one single grain Scotch. 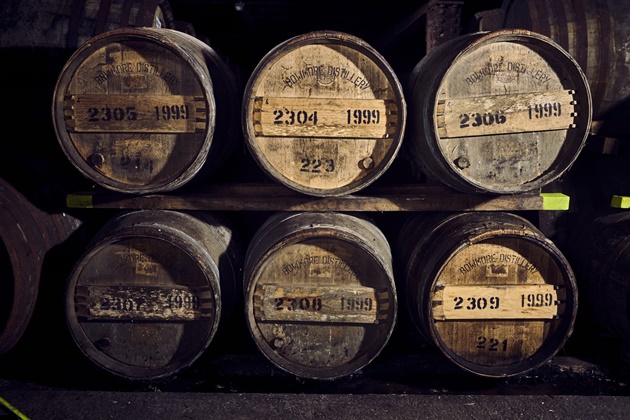 A homage to the essence of Islay – thrashing waves, windswept landscapes, and generations of tradition, the Single Malt Scotch Whisky is both complex and perfectly balanced. Subtle lemon and sweet heather honey complement its trademark peat smoke, leading to a delicious, long, and mellow finish. Shaped by centuries of skill and tradition, the amber dram is warm and delicious on the palate and has a subtle hint of dark chocolate that leads to its distinct flavour profile.

The shape and design of glassware are fundamental to the sensory experience of whisky and aids in elevating its aroma, taste, and texture before it touches the palate. Most often, Whisky and Scotch glasses have a wide base that tapers towards the top allowing the aromas of the whisky to come together. Adding a few drops of water further uplifts the aromas of the whisky opening them up to enhance the overall nosing and drinking experience.

Pouring the Bowmore Aged 12 Years Single Malt Scotch Whisky into a nosing glass, which is wide from the bottom and narrow at the top, is the best idea. The shape and design of this glass are best suited to capture the aroma of the whisky richly. Ideally, one should pour the drink about twenty minutes before the nosing or the tasting process to allow the flavours to open up. If one is at home and simply wants to enjoy a dram, I would recommend using a thistle-shaped glass as it is comfortable to hold and enjoy the drink.

Use of Ice and the right way to mix a drink

The use of a simple element such as ice plays a very complex role in balancing a drink and the overall whisky drinking experience. As the ice melts into water, it impacts the flavour of the whisky, opening up different aromas and flavours. However, big spherical ice balls or large blocks of ice melt slowly and do not immediately dilute the whisky. For Single Malt Scotch whiskies, I would recommend adding water at room temperature instead of ice which is 16 degrees centigrade in geography like Scotland.

The best way to enjoy Bowmore Aged 12 Years Single Malt Scotch Whisky is with a dash of water. This releases the aroma, smokiness, and fruity flavours. I recommend using a sprinkle of water instead of ice as sometimes the temperature may have a bearing effect.