Having followed in his illustrious father's footsteps, Prakash Amritraj is starting to leave footprints of his own 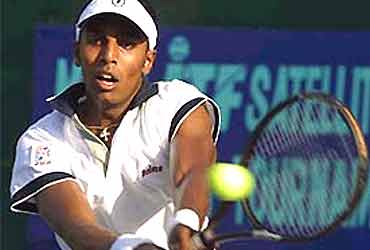 If Vijay Amritraj was born in the 1980s and grew up to play professional tennis, he would probably be attired in T-shirts held together at the chest by zippers instead of buttons. He would wear baggy shorts that reached half way to the ground and had absolutely no sense of shape or form. Instead of flat keds, he would slip his feet into aerodynamic contraptions that promised to enable him hare across court in search of the yellow fuzz. The hairdo would be sharp, given to changing with seasons, from long and flowing to spiky and cropped.

His racquet wouldn’t be wooden, but made of elements more likely to be remembered from the chemistry class. He would play a brand of tennis that was more all-court in nature, have a two-fisted backhand; net rushing, instead of being the stock strategy, would be a tactic used sparingly. He would wear his aggression on his sleeve and exhibit it on court, even indulge in the occasional spot of gamesmanship.

He would be much like his 19-year-old, tennis-playing son Prakash Amritraj.

The first impression one forms after watching Amritraj Junior on court, and speaking to him off it, is that he’s basically a twenty-first century version of his father, who happens to be the most decorated singles tennis player this sports-starved nation has produced. His demeanour is polite and confident. His manners are curt. His words are articulate, with an American twang. The sporting values are impeccable. The resemblance is uncanny.

Of course, in the collective mind of an Indian public that can be generous in victory and unforgiving in defeat, it’s an impression that is shaped even before they watch Prakash in the flesh, and is simply in search of reaffirmation. With such a thin plot line, every hint of likeness between father and son is blown up and magnified, and an individual labelled. It’s harmless if such comparisons are made at a superficial level or seen as purely incidental. But when, unfairly, the comparison comes to rest on expectations and acquires a competitive streak, the Amritraj tag can turn from a boon to a curse.

Vijay is a big reason, if not the biggest, for Prakash growing into a tennis player of much promise, possibly the future of Indian tennis. Vijay has effortlessly passed on his talent and love for the game to his son, and stood by him while he tries to make something out of this gift. On the flip side, though, Prakash steps on court knowing that, unlike his peers, he is sized up on an additional scale reserved for kids of famous parents: his father’s on court achievements. And, by any account, that’s no mean benchmark: in a career spanning two decades, Vijay won 16 singles titles, 13 doubles titles, two final appearances in Davis Cup and a career-high singles ranking of 16.

To his credit, Prakash, who recently turned professional, is neither daunted nor discomforted by repeated inquisitions on what it means to be suffixed with the most famous surname in Indian tennis, and whether it is a beast of burden. For the umpteenth time, and definitely not the last, he patiently explains: "I get asked this question quite frequently. I don’t really see it as a burden. People expect me to do well, they have high expectations, but I place even higher expectations on myself. Often, people’s expectations don’t weigh up to the expectations I have of myself."

He’s hesitant to spell out "his expectations" or quantify it, but the refrain is on continuing to improve -- and quickly. Says Prakash: "Basically, play a lot of tournaments, get match experience, and let my ranking take care of itself." And what would make him a better player, help him break into the big league, where tournament directors seek him and not the other way round? "I have a good all-court game. What I need to do is cut down on my mistakes, be more consistent." It comes down to playing more matches, in diverse conditions, against better players than the lot he swept in the recently-concluded four-leg ‘Satellite’ circuit (the fourth tier of tennis tournaments, after the main ATP Tour events, Challengers and Futures, respectively) in India.

By far the best singles player on view in a field comprising mostly Indians and Indonesians, Prakash finished with three title wins (his maiden wins as a pro) and a semi-final loss, raking in 36 ATP points. This should bump up his world ranking from 618 to around 450, which will help him get direct entry into the ‘Challengers’ (the second tier of tennis tournaments), perhaps, even some qualifying slots and wildcards in the main Tour events. Next on his itinerary is Newport on grass, which Vijay won thrice, coincidentally all in US Presidential election years. After that, as the main Tour hits the US hard courts, he wants to play more singles qualifiers and doubles with cousin Stephen.

Then, there is the small matter of the Davis Cup, one of the two career dreams for most aspiring Indian tennis players. Says Prakash: "I get goose bumps even thinking about it. Since I was small, I have dreamt about two things: winning at Wimbledon and winning the Davis Cup for India." He now has a legible shot at one of them at least. Earlier this year, the AITA (All-India Tennis Association) cleared Prakash to represent India, and he is eagerly awaiting his call-up. After his dominant showing in the Satellites, it could come as early as September, when India travel to Holland for a World Group play-off tie, on indoor hard courts.

Prakash revels on fast surfaces like grass and hard courts, which opens the possibility of Prakash even earning the second singles slot, ahead of Rohan Bopanna, who has got the job done at the regional level but has been good only in patches. It’s a three-way play-off between the three who represent the second string of Indian tennis -- Bopanna, Prakash and Harsh Mankad. July and August should see the three pounding away in the US and Europe, at various levels, mostly on hard courts. Those results could well sway selection for that second singles slot.

On his part, Prakash relishes the grandeur of the big stage. Like other athletes who love the spotlight, he too has the natural ability to use his game and mannerisms to forge a bond with the crowd -- and get them involved as well as feed off them.

Says Prakash: "It’s great if people want to watch. The more people that come to watch, the better I play." It’s a high that finds a true expression in the intense, often rough, atmosphere of Davis Cup, which places a premium on nerves and character like no other occasion in tennis. It’s a good fit.

A lot has been passed down from father to son. The little kid who sucked his thumb lying peacefully on his father’s chest at Hyde Park, who was seen fooling around with dad’s Donnay racquets, has grown up. And grown up well. In the way he plays the game and the way he talks about it, Prakash offers a wide perspective on sport, one that embraces history, has a social context and stands for good sporting values.

"For me, tennis is more than just a game from which you are trying to make money. When I see my father or Becker play, it looks like an art, a thing of beauty." A similar stream of thought is echoed in his choice of favourite basketball players -- Kobe Bryant and Ray Allen. "I like the way they carry themselves on court. They are gentlemen, intense and charismatic. As a sportsperson, you can be all three at the same time."

Behind the ambitious and driven tennis player is an everyday guy, one who loves going to the movies and would love to act himself one day (uncle Ashok, watch out!), digs sixties soul and nineties hip-hop, watching Bryant and the Los Angeles Lakers, and has an email ID that is a curious combination of underground record labels and Allen’s jersey number.

Tennis players pursue grand dreams, but even they make practical choices at every other turn. Prakash stands at a delicate stage in his tennis career, both in terms of age and progress. The next couple of years will offer pointers on the direction his career is likely to take -- whether he is one of the rare Indians to graduate to the higher echelons, or hang around the fringes on the singles and end up making doubles his mainstay.

Much will hinge on how much Prakash can improve, and how fast. Although he doesn’t have a ‘killer stroke’, he has worked hard on his fundamentals to possess a solid all-court game. It’s now more a question of pushing the envelope -- polishing skills, ironing out the rough edges, combining it with strategy, increasing strength and stamina.

Last year, Prakash balanced tennis with education, playing a bunch of Grand Slams and a handful of main Tour events, both singles and doubles, on the strength of his showing in the US collegiate and junior circuit. The Indian Satellite was his first full outing after turning pro. It was a tough four-week stretch that left him a bit drained in the end. That’s the shape of things to come. He’s game for it. Says Prakash: "I love the rhythm of the Tour and tennis. I enjoy eight-hour work days -- playing, practicing, off-court training, gym work."

When work is fun, it shows up in the shape of a strong work ethic. Even so, for enduring success, a good work ethic has to be complemented by progress and purpose that is backed by a vision. Central to this goal of raising the bar continuously is a good coach. One of the many reasons why several talented home-grown Indian players have stagnated has been the absence of a competent full-time coach; they don’t have sufficient money to shell out and the AITA apparently doesn’t believe much in making this investment.

Prakash has it better, much better. He’s been born into a family that, across three generations now, has understood the need to give athletes a support system that enables them to have a tunnel vision. And to the extent they can afford it, they don’t let money be an impediment.

At present, Vijay doubles up as Prakash’s coach, and they exchange notes on the phone or whenever they meet up. But there are no plans of Vijay hooking up full-time, as he himself maintains a gruelling schedule. There are plans, though, of a travelling coach. Vijay, in his heydays, honed his game under the hawk eye of Pancho Gonzales and Roy Emerson, among others, and there are many reasons to believe that Prakash can have it just as good in the coaching department.

Prakash is about to embark on a journey his father and uncle Anand undertook three decades ago. The difference is that while they were venturing into a new and unknown world, Prakash will have some idea of what lies ahead. While they had to contend with numerous peripheral hassles to give their tennis dreams a chance of being realised, Prakash has many such issues taken care off.

But strip away the background, and it all evens out. Beyond a point, success and self-worth in sport is strung together by sweat and toil, knowledge and persistence; it is measured not by how much you achieve in comparison to your father or your peers, but whether you always gave it your best shot or not. That is a constant. It is something Prakash Amritraj understands.