Escape From The 'Death Chamber'

'When they saw it was pointless trying to destroy my mind, they attempted to destroy my body. In this they succeeded by ruining my health which leaves me with no other alternative but to leave this country' 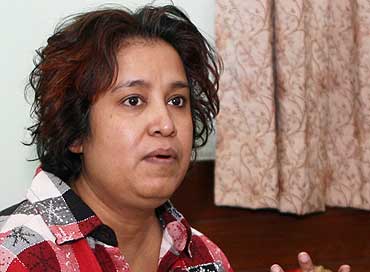 Taslima Nasreen is leaving India to rescue her life. She does not flee from the threat of the fundamentalists, but from the unbearable conditions in which she is held. For four months now, the Indian Government is keeping her in solitary confinement at an undisclosed location. She is not allowed to meet anybody including closest friends. And worse: she has been denied urgently needed medical treatment. As a result, her health is in alarming condition.

I have been in constant phone contact with Taslima Nasreen in her secret prison. The following shocking document, written by her some days ago and sent to me, has been kept under wraps according to her wishes till the eve of her departure. This morning she told me that I could release it.

I used to call this the torture chamber. I gradually came to realize that it was the chamber of death instead. I was not even allowed to stay in hospital for long though the doctors felt it was necessary in order to stabilize my blood pressure. But then, orders are orders and the government did not want to be inconvenienced by me in any way whatsoever. The government did not want the media to know I had been hospitalized. I did not have my mobile phone with me and the doctors at the government's hospital --AIIMS -- were instructed to discharge me after a certain period of time. Curiously though, the decision was not left to the doctors as to what this certain period of time was to be. The last time I was admitted to this hospital a few weeks ago I was suddenly discharged as a result of governmental pressure. I am sure this was linked to a report in the Times of India which stated I had been hospitalized.

At this undisclosed location I am neither allowed to go to a doctor for consultation nor is one allowed to come to me. I suffer from severely fluctuating blood pressure and the strange thing is that I was not even allowed to speak to any of the doctors at the hospital over the telephone. Even after repeated requests I was not given a single phone number. When I was in hospital, I asked the doctors if I could call them if necessary but they said that they were not allowed to hand out their numbers. I had to make inquiries through officials to get even the simplest of answers from these doctors. I have suffered tremendously both physically and mentally. My blood pressure is now impossible to control. The doctors say it is due to stress which I must avoid at all costs. How can I not be stressed when everything is continuously stressing me out? I am brought to this place and incarcerated like some animal; my human rights constantly and continually violated. I am not allowed to step out or meet anyone. How can I not be stressed? I received the extension of my resident's permit, but the status quo continued.

Prior to my confinement, my blood pressure had been under control and all my organs were in perfect condition. After returning from hospital, I wanted to leave this country at the earliest as I knew I would never be free from stress here. I said I needed to go to Kolkata urgently to collect a few important documents and other assorted things including bank cards and to sign my tax papers. That too, just the basic permission to visit my Kolkata flat to wrap up my life there, was denied for security reasons.

It is important that all this be known. I made repeated requests to be allowed to consult a medical specialist as my condition was growing worse with the ever increasing stress I had to face in this not-so-gilded cage. I was not allowed to see a doctor for more than two months. The decision makers asked the officials not to attend to me especially when I desperately needed a doctor. Two months after my initial request, I was eventually taken to a quack to an undisclosed third location who could, unsurprisingly, do nothing at all. I insisted that I had to see a cardiologist or at least a specialist. I was then told that this would entail a visit to the doctor's chamber. I agreed to go but was told that I would not be allowed to go to a doctor's chamber because of the 'security risks' involved. I fell very ill and told the officials I was likely to have a heart attack.

After a few days, at the same undisclosed location, I was allowed to see a doctor from the AIIMS who prescribed some medicines after taking which I fainted. The same night I was admitted to hospital where my blood pressure fell alarmingly and had to be given life-saving-drugs to survive. The doctors told me that I needed to spend two or three weeks in hospital but the officials whisked me away from the critical care unit after just three days and took me directly to meet the Minister for External Affairs. The Minister asked me to leave the country the shock of which made my blood pressure shoot up to 220/120. I was rushed to the hospital but the doctors were instructed by the officials not to admit me for 'security reasons'. In my not-so-gilded cage, I had no help at all.

It has been nearly eight months that I have been living under virtual house arrest, in a prison without any facilities. I have been asked continuously by the government to leave this country. Naturally, this has upset me a great deal as I left Europe to relocate to India; to make India my permanent home. I settled in Kolkata where I was living peacefully in a Bengali milieu. I was very active helping oppressed women and writing feminist and humanist literature. Just because a few Muslim fundamentalists objected to my being in this country, I was first imprisoned in Kolkata and then moved to Delhi. In order for the politicians to secure their Muslim vote bank, I had to be locked up and, as a consequence, my health was irreparably destroyed.