Connaught Place has become so decrepit it should be declared an art installation. Walking around was a nightmare of broken sidewalks, peeling plaster and gaping ditches. 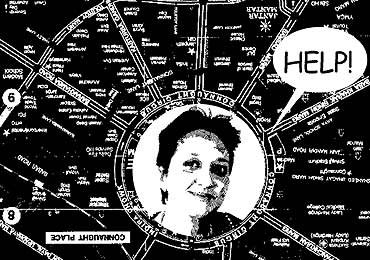 Connaught Place has become so decrepit it should be declared an art installation. I went there in search of Dhoomimal Gallery, where my friend Anjolie Ela Menon and three members of her family are exhibiting their paintings. Walking around was a nightmare of broken sidewalks, peeling plaster and gaping ditches. A crowd of haggard, unshaven viewers gazed up at sleek politicians on a TV set. A huge man dressed in a heavily-embroidered white chikan kurta blazed out of a dark doorway. Another man, perched on a tattered cane-stool by the side of the road winked and whispered as I passed, "Foreign exchange?"

Entering the gallery was therefore surreal: it was as if the decaying city outside had been frozen within the frames of the paintings. The mouldy walls, cracked tiles, scratched paint, all were represented there-- except of course the paintings were beautiful while the exterior environment was not. It was a pleasure to catch up with the familiar figures of Menon's world: the despairing nudes with their flawless complexions, the melancholy priests, the odd lizard on the wall and, in the distance, a tiny, jaunty kite. I so rarely go to any exhibitions, that seeing this one was a reminder that they can sometimes be interesting and rewarding.

Menon's work has always included layered references to her life so that one can go hunting within them for portraits of friends and relatives, for bits of jewellery currently on her fingers, for the toe of a slipper recently chewed by her dog. Since this show includes the work of her son and grandchildren it was like seeing another level of layers. In the girls' work we see the madonna-faces, the mosaics of texture and colour, the playfulness of a more gracious world. In the son's work we see the jagged edges and darker tones of today's electronic era. He's an architect and his paintings reflect the straight lines and precision of his profession, but viewed as if through a splintered mirror. His compositions are jittery with distorted chairs and skewed window-sections, broken masonry and shattered panes.

No doubt he's living closer to the ugly realities of the world immediately outside the gallery. And not just outside: even while I was in there, the rear of the exhibition space was filled with packaging materials as someone else's consignment was being opened, in the middle of the current show.

I left the gallery feeling faded and exhausted, as if I had become one of the doomed citizens of Menon's microcosm, paint peeling from my hands, hair drizzling down my face in the thin rain. Just as I was about to drown in artistic desolation, I recognised my cab-driver, wandering away in search of a cup of tea. I'd forgotten to note down the taxi's licence number so if I hadn't bumped into the driver just then, I'd have gone crazy looking for him. Joy! Resurrection! I leapt into the car feeling like a red-and-yellow kite cut loose from its string.