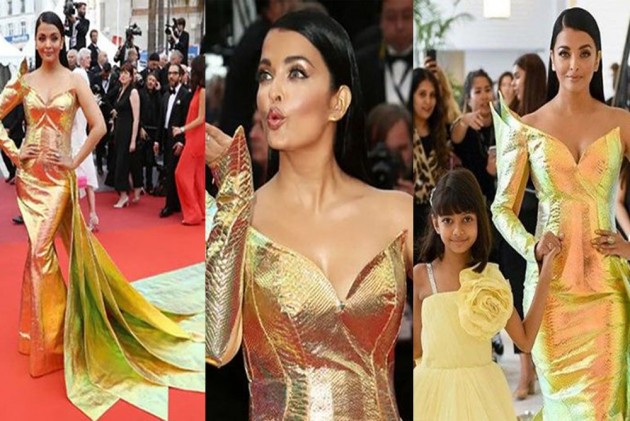 The Crème de la crème of the Hollywood and Bollywood industries make their way to Cannes every year for one of the most glamorous events - the Cannes Film Festival.

Among several Bollywood celebs who grace the red carpet at Cannes, former Miss World and actor Aishwarya Rai Bachchan is the one who has been attending the event for over a decade. And there's no escaping the fashion police if you are Aishwarya Rai.

One Sunday, Aishwarya wore a metallic golden mermaid-like gown with long train. Though many praised her mermaid look, several netiens and designers dissed her for the choice of her clothes.

Designer Anand Kabra said, “This time Aishwarya Rai Bachchan screwed it up majorly.Aishwarya's dressing should talk about maturity. The golden was not one bit flattering. It is sad that Aishwarya’s team of stylist makes such unfortunate choices.

“So far Aishwarya has managed to sail through even with her bad choices of outfits, but this time it was just beyond sailing," Kabra added.

Designer Aachal Sagar of Ohfab says, “While her look in white gown was stunning, the other looks were not flattering. We have such treasures in our country when it comes to weaves and embroideries. It is time she should experiment with some Indian outfits."

However, ace designer Wendell Rodricks begs to differ. He says, "What is weird and what is not is a personal opinion. I didn't find Ash's dressing weird. She looked dramatic, elegant and futuristic. I simply loved the look. She stepped out of the comfort zone and I am happy for that. Personally I am not in favourof people toeing the line of what is expected of celebs. The gold gown was sunnier than the sun rays on the Riviera sun. The metallic tone added edge. And I loved the four origami style fish tail."