Responding with amusement to the deluge of tweets crowding social media about the appearance of a Starbucks coffee cup in the latest episode of GoT, HBO said Daenerys Targaryen had ordered herbal tea, but was 'delivered a latte by mistake.' 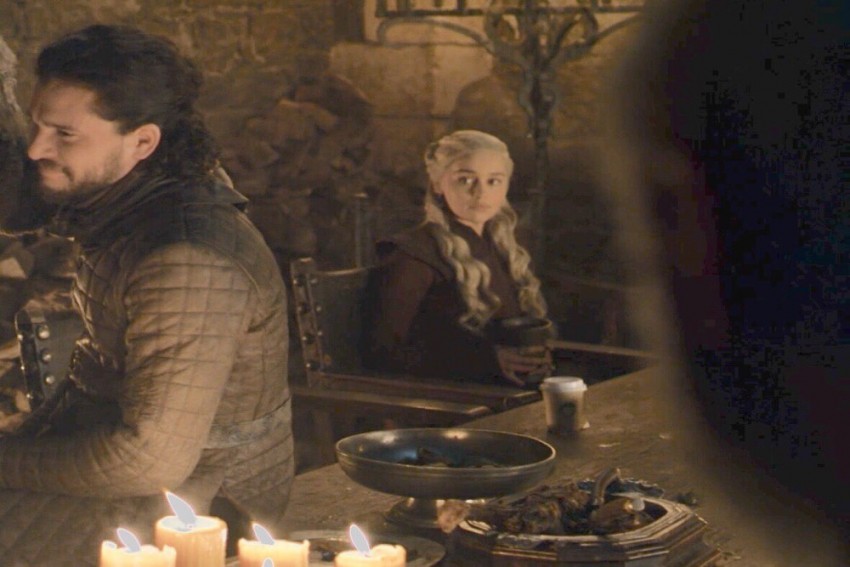 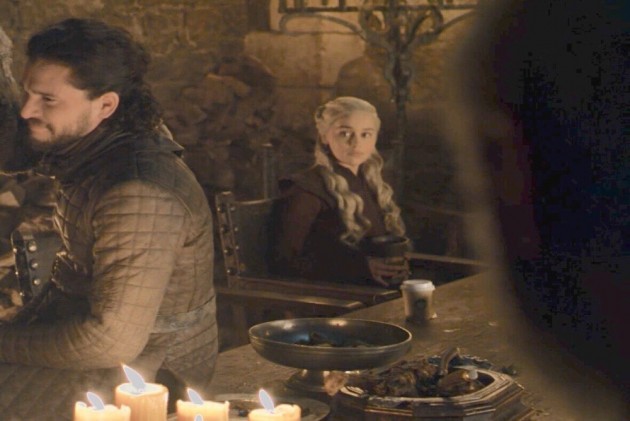 “Game Of Thrones” fans flooded the social media with a chain of tweets, after they spotted a huge blunder in the latest episode of the fantasy drama, with a branded coffee cup making it into a scene.

The tense episode included several dramatic scenes as the characters dealt with the aftermath of last week's 'Battle of Winterfell', but it was the Starbucks cup that stole the show for the "Game of Thrones" viewers, reports thesun.co.uk.

The cup was placed in front of Daenerys Targaryen, essayed by Emilia Clarke, during a banquet scene.

One of the opening scenes in the episode featured all of the key characters celebrating the Night King's defeat with the banquet in the castle.

While Jon Snow, played by Kit Harington, joined in with the drinking, Daenerys remained distant after losing one of her closest friends in the fight, Ser Jorah Mormont ,and learning that Jon has a valid claim to the Iron Throne.

As she stared sadly at the revellers from her spot at the head table, a Starbucks coffee cup sits just in front of her.

Noticing the awkward blunder, one fan tweeted: "They seriously left a Starbucks cup in a GoT scene... I don't even know what to say... How didn't anyone spot this on set, let alone in post?"

lmfao they seriously left a starbucks cup in a GoT scene.. i don’t even know what to say...how didn’t anyone spot this on set, let alone in post

Another fan wrote, "I still can't believe they left a Starbucks cup in this scene from the biggest show on television."

i still can’t believe they left a starbucks cup in this scene from the biggest show on television..... pic.twitter.com/ZqOaGC5fU3

Another quipped: "I missed the story arc where Dany discovers Pumpkin Spice Lattes."

While some questioned how Clarke didn't notice the cup in front of her during filming, many others poked fun at the mistake.

"Wow. Product placement negotiations are getting fierce!" one wrote.

"OMG. Someone else's head is going to roll for that mistake," another tweeted.

The gaffe comes one month after a viewer noticed a mistake in the first ever episode of the eight-series show, with an extra spotted in modern clothes in the background of a scene.

Some said it was proof that even the Dragon Queen is living on coffee to claim the coveted Iron Throne.

"Even the Mother of Dragons needs a good coffee if she is to take back the Iron Throne," a user wrote.

One of them even went on to suggest a popular coffee chain was the sponsor for the show.

Responding with amusement to the deluge of tweets crowding the social media, HBO said Daenerys Targaryen had ordered herbal tea, but was delivered a latte by mistake.

"The latte that appeared in the episode was a mistake. Daenerys had ordered a herbal tea," HBO stated in a press release issued to Variety.

"Game of Thrones" art director Hauke Richter said it is not unusual for random items to end up misplaced on set, or go unnoticed and appear in the final cuts.

Bernadette Caulfield, the show's executive producer, also reacted on the blunder in an interview with "Behind the Thrones" on WNYC.

"Westeros was the first place to have Starbucks, it's a little-known fact. If that's the worst thing that they're finding, we're in good shape," she said.

The coffee chain took the opportunity to promote its Dragon Drink, a pink tropical-inspired blend of sweet mango and dragon fruit flavours.

The popular fantasy show will come to an end on May 19. The show is aired in India on Star World.