To tell the story of an ordinary man who rises to the top, director Ranjith uses all time-tested clichés. 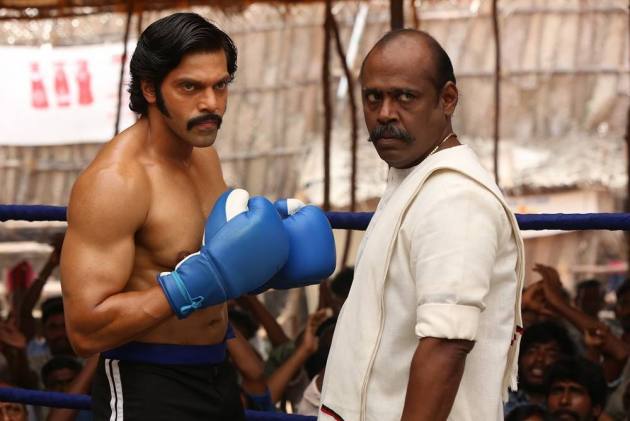 Whenever we talk about sports movies, it seems like our minds gravitate towards team sports only, and it’s no wonder that one often hear about films relating to basketball, football, or baseball ranking among the best in the category. Almost running parallel as a genre though, the real life story of one of the most significant and celebrated figures of the 20th century, who is also ranked as the best heavyweight boxer of all time Muhhamad Ali, alias Cassius Clay, has also been the genesis of umpteen films, both in Hollywood and in India. With tremendous success too!

Director Pa. Ranjith released ‘Sarpatta Parambarai’ this week and, almost instantly, had fans getting hooked on to it. It’s as much about paying homage to the legend and his legacy as it is to delivering an entertaining film.

But to be fair to the genre of boxing sagas, Muhammad Ali may have had the ability “to float like a butterfly and sting like a bee,” but on celluloid versions showing such feats, almost every element reminds us of other movies, such as, Hollywood’s ‘Rocky’ and ‘Raging Bull’, that are more like brands and have set the benchmark for boxing-in-the-ring contest movies.

Despite predictability and all formulaic scenes, this Arya starrer gives you a ride that pulls no punches, and is more like a trip down memory lane for many of us, and needless to add, wins every round. For Arya, the role of Kabilan, is right up his alley. His transformation for someone who doesn’t display his emotions and his love for the game to his being a reluctant boxer to finally emerging as the champion is praiseworthy.

To clear any doubts about the hero of this film, the similarity between him and the inspiration Ali, is only due to the legend’s popularity worldwide, that had many fanclubs mushrooming in every part of the world. Our hero is ordinary here, but his rage that stems from his undivided passion, and his entire life being the sport, is what the two have in common!

Set against the backdrop of the 1970s, ‘Sarpatta Parambarai’ derives enough inspiration from the boxing arena that dominated Chennai then, and had several clans with numerous pugilists ruling the roost. They all had political patronage as well, besides having a huge fanbase and heavyweight coaches to complete the entire picture that often had groups coming to blows at the slightest given opportunity whenever any fan became emotional about his hero losing to any rival. These fights, thus, were more of a tradition that led to false pride and often resulted in bloodshed too.

Co-writer Tamizh Prabha along with Ranjith can’t help ghosts of past movies making appearances throughout, but there’s a slight twist: Arya is Kabilan, a port worker whose passion for boxing could make him give up everything to fight on behalf of the Sarpatta clan. His mother Baakiyam (Anupama Kumar) will never allow it, and the revered coach Rangan (Pasupathy) too, wouldn’t go against Arya’s mother’s wishes. She is dead against the idea of his taking up boxing since her husband got killed in one of the ugly fights after a match. She feared that her son may face the same fate if he got involved in boxing, Destiny though has other plans for Kabilan.

Surprised by Kabilan's fighting techniques, when coach Rangan announces that an amateur boxer like him would take on and fight against Vembuli, the unbeatable champ, much to the disapproval of the other clan members, Kabilan is in for a shock. His promise to his mother has to be broken, and he can’t figure out what course to follow. Once when he gets a chance to prove his worth after Sapatta loses and it becomes a do-or-die situation for the clan, and its very survival is endangered, he decides to take the plunge. A quick learner Kabilan manages to learn his movements as per his coach Rangan’s commands, and knocks his opponent Vembuli out within two rounds, and gains the upper hand by pummelling him with heavy blows. He is soon attacked brutally by Vembuli’s men who can’t take defeat. A crestfallen Kabilan decides to quit boxing and decides to live a modest life with his mother and wife Mariyamma.

We have had a spate of releases every year, when some of the most dramatic and emotionally gripping sports films in history were focused on the boxing ring. Nearly all of them have been liked, even adored, by both critics and fans alike, largely, because of the A-listers heading the cast. It’s fun to watch stars working on their abs to prove their ability to get into the skin of such burly real life figures, and who cares for acting, anyway? Not that there’s much in terms of histrionics to prove.

To tell the story of an ordinary man who rises to the top, director Ranjith uses all time-tested clichés in its 175-minute-long run time. A loud mother screaming herself hoarse; a tragic past that killed Kabilan’s father; a much-in-love wife who wants her share of love and time, and on not getting any, throws tantrums; rivals doing their utmost to oust him even bump him off; his coach’s reluctance to train and mentor him, etc. are all within the framework of a storyline that go on to add several twists to the drama.