Celebrities such as Diljit Dosanjh, Harbhajan Mann, Jasbir Jassi, Reitesh Deshmukh, director Hansal Mehta and others have already declared their support to farmers. 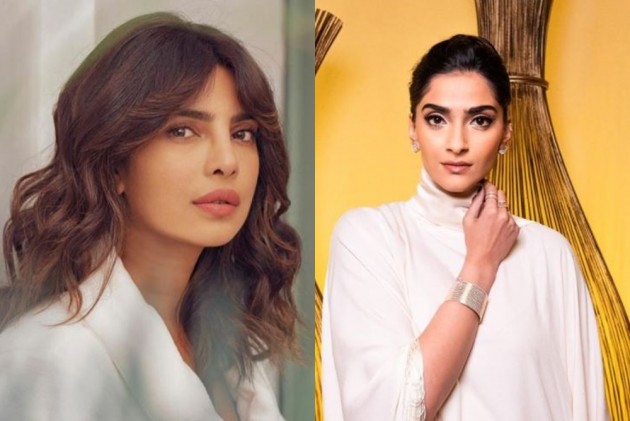 Actors Sonam Kapoor and Priyanka Chopra are among the growing list of celebrities from from Bollywood who have extended their support to farmers protesting against the Centre's new farm laws.

Farmers have called for a 'Bharat Bandh' on Tuesday, warning that they will intensify their agitation and block more roads leading to the national capital if the government did not accept their demands.

Celebrities such as Diljit Dosanjh, Harbhajan Mann, Jasbir Jassi, Reitesh Deshmukh, director Hansal Mehta and others have already declared their support to farmers.

In a tweet in reply to Dosanjh's message of unity from the protest site, Chopra said their concerns should be addressed "sooner than later".

"Our farmers are India’s Food Soldiers. Their fears need to be allayed. Their hopes need to be met. As a thriving democracy, we must ensure that this crises is resolved sooner than later," she tweeted.

Dosanjh, who took on actor Kangana Ranaut for her comments on elderly protesting farmer recently, later donated Rs one crore to the farmers cause and even addressed a rally at the Singhu border on Saturday.

In his latest tweets, the actor has supported farmers' call for a 'Bharat Band' on Tuesday.

"When tillage begins, other arts follow. The farmers, therefore, are the founders of civilsation," she wrote on Twitter.

Actor Priety Zinta said her heart goes to the protesting farmers, who she called the "soldiers of soil".

"My heart goes out 2the farmers & their families protesting in the cold in this pandemic.They are the soldiers of the soil that keep our country going.I sincerely hope the talks between the farmers & govt yield positive results soon & all is resolved. #Farmerprotests #Rabrakha," Zinta said.

Deshmukh, in a tweet, on Saturday, said, "If you eat today, thank a farmer. I stand in solidarity with every farmer in our country. #JaiKisan."

"They feed us and work tirelessly with their sweat & blood. #respectfarmers."

Actor Richa Chadha, Taapsee Pannu, Swara Bhasker and Mohd. Zeeshan Ayyub are among the celebrities who have been constantly tweeting on the issue.

But some of the biggest stars from the industry have remained silent on the issue, leading to criticism from within and outside

Singer Gippy Grewal has criticised Bollywood for not speaking up for farmers.

"Dear Bollywood, every now and then your movies have been shot in Punjab & every time you have been welcomed with an open heart. But today when Punjab needs you the most, you didn't show up and speak a word. #Disappointed."

Thousands of farmers have gathered at Delhi's two borders to protest against the new farm laws, which many farmers say will pave way for the dismantling of the minimum support price system, leaving them at the "mercy" of big corporates.