"The Simpsons" illustrators Stefano Monda and Rino Russo have given the newly-wed couple Priyanka Chopra and Nick Jonas a speacial wedding gift with their own version of caricatures from the world of the fictitious town Springfield. 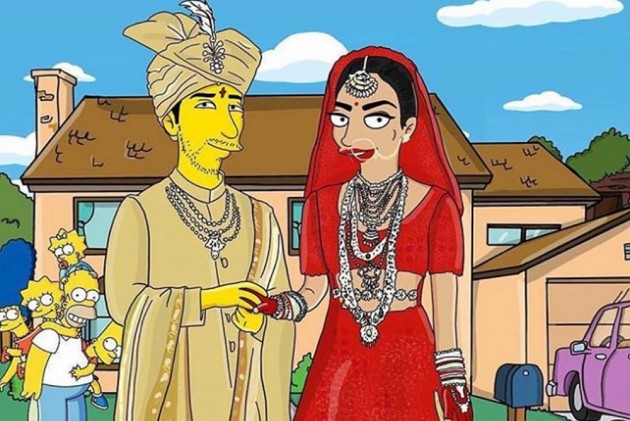 "The Simpsons" illustrators Stefano Monda and Rino Russo have given the newly-wed couple Priyanka Chopra and Nick Jonas a speacial wedding gift with their own version of caricatures from the world of the fictitious town Springfield.

Priyanka Chopra took to Instagram to share the two cartoons that were a play on their twin wedding in Indian city of Jodhpur where they were dressed in traditional white and red colours to honour the roots of the couple.

Priyanka and Nick exchanged wedding vows on December 1 at the majestic Umaid Bhawan Palace in a Catholic ceremony officiated by the groom's father Kevin Jonas Sr. It was followed by an equally grand wedding as per Hindu traditions on December 2.

In the first artwork, a scene from the Christian nuptials, here officiated by Homer Simpson, Priyanka and Nick can be seen standing in an embrace showing off their rings. A board titled, "First Church of Springfield - Wedding Day: Priyanka and Nick", is also visible in the cartoon.

In the cartoon from the Hindu wedding, the couple can be seen holding hands, as the Simpsons family - Homer, Marge, Bart, Lisa and Maggie - watches from the side. She captioned the picture: "#simpsons", with a heart emoji.

However, Priyanka's skin tone in the red wedding cartoon appears to have gone from yellow, as it was during the white ceremony, to a lighter brown.

The animated sitcom has recently come under fire for the stereotypical representation of the South Asians through its character, Apu Nahasapeemapetilon.