Actor Emraan Hashmi has criticised the Central Board of Film Certification's order to rename his forthcoming film from 'Cheat India' to 'Why Cheat India'. 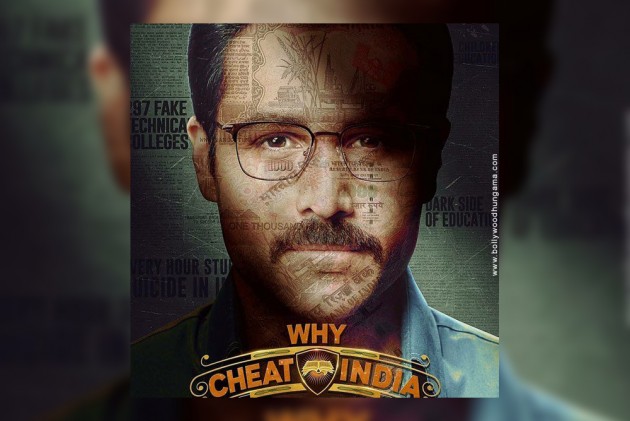 Actor Emraan Hashmi has criticised the Central Board of Film Certification's order to rename his forthcoming film from "Cheat India" to "Why Cheat India". The actor said that instead of changing the title, we need to change the education system of the country.

Hashmi was interacting with the media to promote "Why Cheat India" along with his co-actress Shreya Dhanwanthary on Monday.

The film's title was reportedly changed after an objection from the CBFC.

Reacting to the change, Hashmi said, "Now they (CBFC) have directed us and we have changed title of the film. We are a little upset that they have told us to do that just seven days before the release of the film. They approved the title when we released the promo of the film and now, while giving censor certificate to the film, they had issue with the title of the film."

He added that the Indian audience is sensible enough to know what is good and what is bad in the film.

"It's a little saddening because we were working towards the release of the film and now, suddenly we are changing the title of the film. They thought that 'Cheat India' is a negative title so, they suggested us to change it to 'Why Cheat India' as they felt that it will bring positivity to the title. But I feel you should know that our audience is sensible enough to know what is good and what is bad."

Hashmi added that instead of changing the title of a film we should rectify the issues of the educational system.

"Cheating mafias are cheating in our country and that's why we kept the title 'Cheat India'. It is very easy to change the title of the film but I think more than changing the title of a certain film, we need to change the system, then the youth of this generation will have a brighter future."

Talking about the loopholes in the education system he said, "I have learned a few things in my school life as a student but there are lots of things which I haven't learnt during that period."

"We concentrate on mugging rather than understanding a subject. In colleges, our faculties are unqualified or they are disinterested in teaching. We have limited seats in educational institutes where the huge number of students pass out from schools and colleges every year."

The actor added that he didn't know that the cheating mafia is organized crime in the country.

"I knew about cheating mafias but I didn't know it's such a huge organised crime. In every state of the country, there is the existence of cheating mafias. We give 60 per cent reservation in educational institutes so, in the remaining  40 per cent, if we start giving seats to undeserving students then where will deserving students go? I thought it's a very important issue and somebody needs to make a film on a subject like this so that people will become aware of such practices."

Hashmi said they want the film to get tax-free status in cinemas.

The film will hit cinemas this Friday.