'Feels Like Ishq' Review: Refreshing Take On The Age-Old Theme Of Love

Creative director Devrath Sagar keeps the stories within the realm of personal love, and navigates the gamut of emotions that come with finding romantic connections in unexpected situations 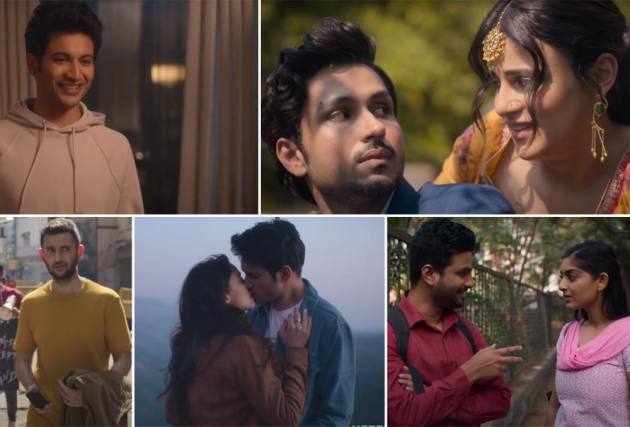 Few objects of study are more fascinating and mysterious than love. Romantic love is both psychological and physical. On celluloid, ‘Love’ has been described, experienced and chronicled over the centuries as an emotion that concerns rising through levels of closeness to wisdom and true beauty. And thus, from carnal attraction towards individual bodies to attraction to souls, and eventually, union with the truth to every conceivable outcome has been looked into in tales, movies and myths. But Bollywood has seldom gone beyond the expected in its portrayal of fragmented emotional experiences. Well, mostly. It has only rarely - and more so in the past decade or so – explored the many splendored sentiment in a variety of ways.

Netflix’s latest anthology of six short films 'Feels Like Ishq' formidably looks at how love can "happen anywhere, anytime in today’s day and age,’ in the realm of the romantic genre, and for once, I found some refreshing take on the age-old notion of boy-meets-girl and so on.

An exciting film category teeming with potential, this portmanteau depicting different circumstances can be a winner all the way. Consisting of several vignettes, often connected in thematic ways, or with the same premise or bookend situation, this anthology, doesn’t stick to a specific genre. It’s, at times, compelling, packing intense emotions, but also resorts to the tried and tested route.

In 'Save The D(ay)te', the setting is a wedding where best friend  Avni (Radhika Madan) is at her wits’ end when the bride ( Devika Vatsa) gets jittery about taking the vows of marriage and disappears, just when the baraat is about to arrive at her doorstep. Not knowing what to do, Avni turns to the wedding planner Jay (Amol Parashar) and almost commands that he assist her in locating her best friend. Taken aback by her sudden entitlement, he doesn’t get enough time to even react and drives her around. Their not-so-pleasant conversations reveal they are two completely opposite individuals, but that doesn’t deter Avni from using him. Despite the unpredictable teenage tantrums that she throws, she somehow endears herself to Jay. Do they fall for each other? Not yet. But what follows is a warm and easy comfort in each other’s quirky ways as both seem relaxed in each other’s company.

In the Tahira Kashyap Khurrana directed 'Quaranteen Crush', it’s the subtle beginning of puppy love that sprouts between two neighbours Nimmi (Kajol Chugh) and Maninder (Mihir Ahuja) during the lockdown imposed due to the Covid pandemic. As Maninder finds innovative ways to befriend his new neighbour who’s on a 14-day quarantine, action consists of pure, unsullied fondness interwoven with care and desire that form the basis of their friendship. He delivers homemade food to her stealthily, and she, in turn, guides him to do well in studies.

Director Anand Tiwari in the episode 'Star Host' focuses on a young boy Aditya (Rohit Saraf), who, to fulfil his parents’ desire to become ‘atmanirbhar’(self-reliant) decides to manage their family resort in Mahabaleshwar. Tara (Simran Jehani) settles for a solo trip to the resort when she and her boyfriend fall out over a trivial issue. Determined to make the most of her vacation all by herself, she loves experiencing the beauteous nature along with Aditya. Both find serendipitous love in each other as they go around exploring while he drives her around his familiar surroundings.

'She Loves Me, She Loves Me Not' directed by Danish Aslam, is beguilingly intelligent, funny, and also, classifiably romantic. Treading carefully in dealing with a tale about two girls who are gay, he never loses sight of his overall goal of dealing with the easy flow and sudden extraordinariness of passion that doesn’t necessarily need to dive into the deeper imaginative realms of high romanticism. Instead, the two playfully discover each other’s orientation, and state things as they are.

Sachin Kundalkar directed 'The Interview' which blends different emotions of confidence, respect, understanding, care and eventually the spark of a strong bonding between two people that features Rajeev (Neeraj Madhav) and Shahana (Zayn Marie Khan). Up for the same job as a less qualified candidate, Shahana sets the stage for a rapport that goes beyond rivalry and offers tips to him. Gradually, they both, start liking each other.

On a post breakup rebound a privileged boy goes on a date with a spirited activist who changes his views on love. Jaydeep Sarkar directs 'Ishq Mastana' about Mehr (Tanya Maniktala) and Kabir (Skand Thakur) who start off as strangers but cultivate a liking organically along the way.

Creative director Devrath Sagar keeps the stories within the realm of personal love, and navigates the gamut of emotions that come with finding romantic connections in unexpected situations. None of the characters even expresses the four-letter word. The exaggerated emotion or open display of ardour is never the motive behind directors Ruchir Arun, Tahira Kashyap Khurrana, Anand Tiwari, Danish Aslam, Jaydeep Sarkar, Sachin Kundalkar, who all are competent to handle the young adults. From among the show's ensemble cast too, Radhika Madan, Amol Parashar, Neeraj Madhav, Tanya Maniktala, Kajol Chug, Mihir Ahuja, Simran Jehani, Rohit Saraf, Saba Azad, Sanjeeta Bhattacharya, Zayn Khan and Skand Thakur, are all lovable in their respective roles.

But, of all the penetrating stories, it may well be Khurrana’s and Alam’s startling cinematic debut as directors that resonate with the most power, though to be fair, all the intertwined vignettes are commendable!