On Tuesday evening, Deepika Padukone made a surprise visit to the Jawaharlal Nehru University to express solidarity with the students who had been attacked. 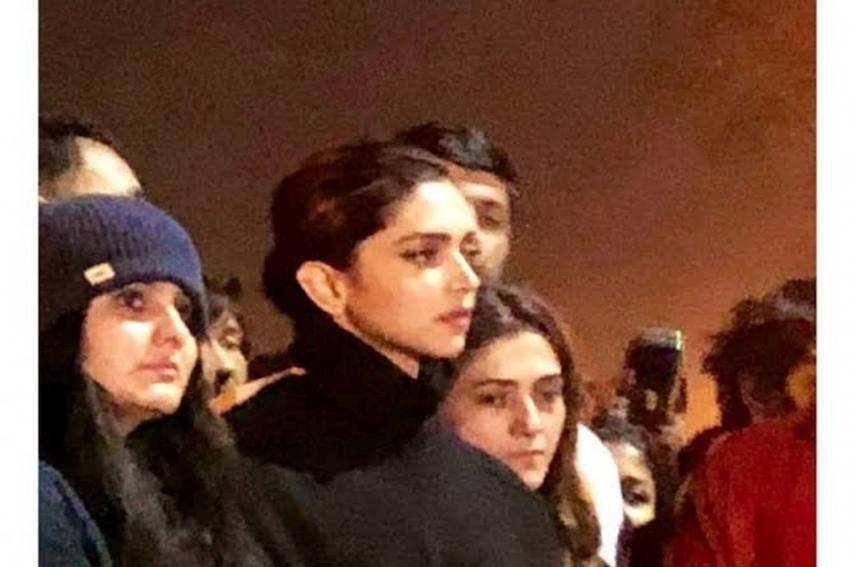 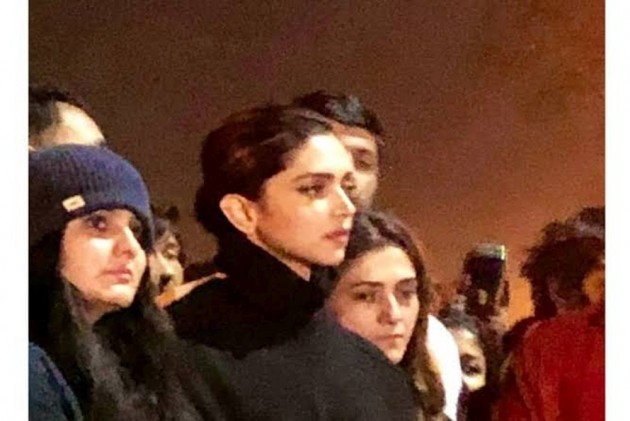 Leapfrogging from the entertainment section to the front pages of newspapers for showing up at JNU, Bollywood star Deepika Padukone was on Wednesday the cynosure of national attention earning bouquets but also many brickbats on social media and elsewhere.

On Tuesday evening, Deepika made a surprise visit to the Jawaharlal Nehru University to express solidarity with the students who had been attacked.

Her decision to stand in silence with JNUSU president Aishe Ghosh, who received head injuries during the attack on Sunday evening, at a public meeting in the campus prompted many in the industry and outside to praise her for her "quiet grace" and "courage". It also prompted hashtags to boycott her Friday release "Chhapaak", a film based on acid attack survivor Laxmi Agarwal.

Though several people in Bollywood have voiced their protest against the attack on students and faculty by a masked mob, Deepika is the rare Bollywood A-lister to do so.

Deepika, who faced death threats and social media vitriol for speaking out during the release of her controversial film "Padmaavat", turns producer with "Chhapaak", directed by Meghna Gulzar, making her stake even higher.

"When she was attacked over 'Padmaavat' very few came forward to support her. She knows what it feels to be targetted and she has shown exemplary courage by supporting the JNU students with quiet grace. More power to Deepika Padukone," veteran actor Shabana Azmi tweeted on Wednesday.

Swara Bhasker, who was one of the firsts from the film community to call for action against the perpetrators of Sunday violence, said "Bollywood just got JNU-ised! #LongLiveJNU #JNUProtests."

Director Anurag Kashyap said he has "mad respect" for the actor and urged people to watch her upcoming film "first day all shows".

"The female of the species is, and was, and will always be the strongest of the two #DeepikaPadukone... Let’s all those who stand against the violence go to @bookmyshow and show them. Make our silent statement which will be the loudest," Kashyap, a vocal supporter of the protests against the citizenship amendment bill and the JNU attack, wrote on the microblogging site.

A day after Kashyap uploaded a cartoon of Prime Minister Narendra Modi and Home Minister Amit Shah in masks with lathis as his Twitter display picture, the director replaced it with a photo of Deepika standing in front of the JNUSU president in what appeared to be a folded hands gesture.

"Let’s not forget she is also the producer of the film.. stakes are even higher," he added.

"Deepika's stand is going to make a lot of young people question their parents, their peers and their government. Hopefully, they will go out and educate themselves and not parrot everything authority tells them," he said.

Veteran director-producer Mahesh Bhatt said, "We are a 'kingdom' of silence no longer!"

Actor Sayani Gupta, who was one of the first stars from Bollywood to ask the actors who took a selfie with Prime Minister Narendra Modi last year to speak up, thanked Deepika for lending a "mainstream narrative" to the movement.

"For using your position to choose the correct path. It always comes to the women and yes, they do deliver! Big love sister! #WeAreWithJNU #noplaceforfascism," Sayani said in a tweet.

Juhi Chaturvedi, the writer of the 2015 Deepika-starrer "Piku", said the actor's courage was "inspiring".

"You truly are incredible!" Juhi added.

Her "Chhapaak" co-star Vikrant Massey also tweeted the viral pictures from JNU campus and said his heart "swells with pride".

Dressed in a black high neck sweater -- changing from the red she was wearing during the film's promotion earlier on Tuesday evening -- the 34-year-old actor chose not to speak, standing by as former JNUSU president Kanhaiya Kumar raised slogans of 'azaadi' and left by the time Aishe started speaking.

"Speak for every injustice! Deepika 'Proud of you, take care' #JNUVCMustResign", Aishe said on Facebook after the event and shared her photograph with the actor.

Kanhaiya cautioned the actor about probable trolling for her stand with JNU.

"More power to you @deepikapadukone and thank you for your solidarity and support. You might be abused or trolled today, but history will remember you for your courage and standing by the idea of India," he tweeted.

Quoting Bob Dylan's prophetic "The Times They Are a-Changin'", former JNU student Umar Khalid thanked Deepika for standing up for students and youth against "fascist bullies".

Alongside the fulsome praise came the vitriol.

Many social media users called for the boycott of the social drama, asking people to watch Ajay Devgn's "Tanhaji: The Unsung Warrior" that faces off with "Chhapaak" on Friday.

"#boycottchhapaak Thank you but no thank you @deepikapadukone - cancelled ticket of 'Chhapaak'," wrote a tweeple.

"#boycottchhapaak she lost all respect."

Calling her visit a promotional stunt, a social media user said, "Shame Shame @deepikapadukone. What a move to promote your movie by standing with #TukdeTukdeGang. But we are not fools. We'll make you understand that what mistake have to done. #boycottchhapaak."

Another urged people to unfollow the actor for supporting the 'deshdrohi' (anti nationals).

"Chhapaak" co-writer Atika Chohan dismissed that actor-producer's JNU trek had anything to do with "publicity".

"Imagine taking a stand two days before your film release when it's your money and hard work on the line. This is not publicity. This is an ardent call of the conscience. I support Deepika Padukone for life, not just for Chhapaak. #ISupportDeepika," Atika tweeted.