Bollywood celebrities took to their social media handles to pay tributes to the late Hollywood actor Sidney Poitier. Here's a compilation of the same.

Bollywood celebrities including actors Anil Kapoor, Manoj Bajpayee, Anupam Kher, actress Dia Mirza and others are taking turns on the internet to pour in tribute for Hollywood actor Sidney Poitier as they are mourning his demise.

Bollywood actor Anupam Kher relives memories of meeting the legendary actor in 2013. He shared a picture with the late star and wrote that Poitier was a fantastic actor, a remarkable person and that he had a great aura around him.

Anil Kapoor took to his Twitter handle and shared a rare throwback picture of himself with Poitier. Calling him his childhood idol, Kapoor mentioned  Poitier as his childhood idol and lifelong inspiration & star of some of his favourite films.  The actor posted the same on his Instagram story as well.

Sidney Poitier, my childhood idol, lifelong inspiration & star of some of my favourite films...
Forever your fan & admirer…
Rest In Peace ðÂÂÂÂÂÂÂÂÂÂÂÂ pic.twitter.com/tN3pXKxt3W

Actor Manjoj Bajpayee experessed his share of grief and took it to Twitter to pay tribute to the late legend. Bajpayee wrote:

Actress Dia Miza took  to her to her Instagram story to pay tribute to Poitier. She called him a star, legend and an icon. 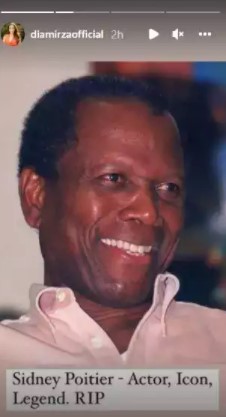 Actress Shibani Dandekar too, took  to her Instagram story to bid the actor a final goodbye. Here's a glimpse of Dandekar's story: 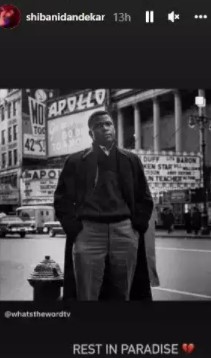 Actress Richa Chadha took to her Instagram story and called Poitier a legend, trailblazer and an icon. 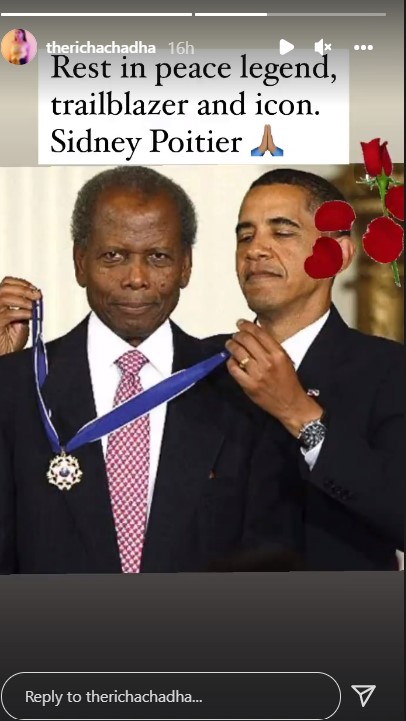 In his later years, as Hollywood sought to recognize a man whose example had opened doors for so many other Black actors, the accolades poured in. In 2001, Poitier received an honorary Academy Award for his overall contribution to American cinema.

In 2009, Former President of United States, BarackObama awarded Poitier the Presidential Medal of Freedom, the country's highest civilian honor, saying, "It's been said that Sidney Poitier does not make movies, he makes milestones ... milestones of artistic excellence, milestones of America's progress."

The Film Society of Lincoln Center bestowed its highest award on Poitier in 2011. Among the speakers praising him was filmmaker Quentin Tarantino, who said, "In the history of movies, there've only been a few actors who, once they gained recognition, their influence forever changed the art form. "There's a time before their arrival, and there's a time after their arrival. And after their arrival, nothing's ever going to be the same again. As far as the movies are concerned, there was pre-Poitier, and there was Hollywood post-Poitier."