Tueday's suicide attack on the Sri Lankan army chief, allegedly by the LTTE, and the retaliatory bombings by the Sri Lankan airforce and navy may turn out to be the flashpoint, but signs of this inevitable slide into a total collapse of the so-called 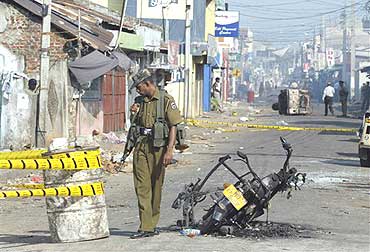 In a virtual collapse of the so-called peace process in Sri Lanka, the Air Force and Navy on Tuesday bombed Liberation Tigers of Tamil Eelam (LTTE) positions in Northeast shortly after a bid on the life of the Army chief by a woman rebel suicide bomber that killed at least 10 soldiers and civilians at the Army Headquarters at Colombo. The Army Chief Lt Gen Sarath Fonseka was critically injured when a suicide bomber, allegedly belonging to the LTTE, disguised as a pregnant woman blew herself inside the heavily-fortified Army headquarters, in the first such attack in the Sri Lankan capital in two years.

Shortly after the attack, Sri Lankan Air Force and Navy began bombing Tamil Tiger rebel positions in the northeast. The head of the government's Peace Secretariat, Palitha Kohona, said the rebels had fired "some shells" at military camps in northeastern Trincomalee after the suicide bombing. He said the retaliatory bombing by the Air Force and Navy was "to deter the LTTE from carrying out further provocative attacks". Scandinavian truce monitors also said the Air Force was targeting LTTE positions in the embattled northeast. "We have just received confirmation of air strikes against LTTE south of Trincomalee," Ulf Henricsson, head of the Scandinavian Sri Lanka Monitoring Mission, told the Swedish newsagency TT. "We don't know what they're bombing. It is probably a limited operation, striking planned targets."

Tamil politicians expressed fears that the suicide bombing and the retaliatory strikes meant a virtual collapse of the peace process. However, Kohona said he still expected the Tigers to return to the negotiating table and that the government action was limited to showing them that negotiations were the only way out. "The government is still committed to peace," Kohona said. There was no immediate reaction from the Tigers.

The Tigers and Colombo were to have met yesterday in Geneva, Switzerland for two-day talks on salvaging their faltering truce, but the rebels indefinitely postponed the talks and did not cooperate with Norwegian peace envoys who tried to bring them back to the negotiating table. Today's attack by the LTTE and the retaliatory measures may have precipitated matters, but as the following article written days before shows, signs of the virtual collapse of the peace process and this inevitable slide into yet another war were too perceptible for too long:

Escalating violence in Sri Lanka means that the situation of 'no war no peace' which has prevailed for the better part of time since the February 2002 truce, is gradually changing – and regrettably for the worse.

The impasse in the now-stalled cease-fire talks continues despite efforts by the facilitator, Norway, to break the standoff between the Government and Liberation Tigers of Tamil Eelam (LTTE). After the first round of cease-fire talks held on February 22-23, 2006, in Geneva the two sides had agreed to meet again on April 19 and 21, 2006. However, following a standoff since early April on the issue of safe movement of LTTE 'commanders', both sides decided to postpone the talks to April 24 and 25. The outfit's political wing leader, S. P. Tamilselvan, is thereafter reported to have informed Norwegian special envoy Jon Hanssen-Bauer on April 20 that the LTTE would be unable to participate in the Geneva talks until "hurdles" were cleared by the Government and a "conducive atmosphere" created.

In the meanwhile, violence has escalated steadily. In the first twenty days of April 2006 alone, at least 81 persons, including 38 civilians and 33 security force (SF) personnel, have been killed, the most violent April Sri Lanka has seen in the past four years. In 2006, a total of 227 persons, including 78 civilians and an equal number of troops, had already been killed by April 20. A fair indication of the escalation is visible in the fact that 330 people, including 153 civilians and 90 soldiers, died in the whole of year 2005, while in 2004 the fatalities totaled 108.

The major incidents of LTTE violence in recent months include, among others:

April 11, 2006: Ten Sri Lankan Navy sailors and a civilian driver were killed and nine others injured in an LTTE-triggered claymore mine explosion at Thampalagamuwa on the Trincomalee-Habarana road.

March 25, 2006: Six LTTE cadres and eight sailors were killed, when a boat heading to northern Sri Lanka and carrying LTTE cadres exploded off the northwest coast.

January 7, 2006: Fifteen Sri Lankan Navy personnel were killed in a suspected suicide attack by the LTTE on a navy gunboat outside the Trincomalee naval harbour in Trincomalee District.

December 27, 2005: Eleven soldiers were killed and four others injured in a LTTE-triggered remote controlled claymore mine explosion in the Puloly west area of Jaffna District.

December 4, 2005: Six soldiers were killed and four persons sustained injuries in two claymore mines explosions by the LTTE at Kondavil on the Jaffna-Palaly main road.

The LTTE has routinely violated terms of the cease-fire agreement (CFA) on innumerable occasions and has systematically consolidated its strength during this period, raising serious questions over the continuity and character of the truce. Sri Lanka's Minister of Media and Information and Cabinet Spokesman, Anura Priyadarshana Yapa, disclosed on February 10, 2006, that 5,464 violations by the LTTE had been reported between February 22, 2002 and February 4, 2006. These included 562 killings, including 174 troops. There were also reports of 117 attempted murders, 620 abductions, 46 attempted abductions, 106 cases of extortion, 2,199 conscriptions, 875 cases of injury, 22 instances of torture and 128 cases of intimidation. The Sri Lanka Monitoring Mission (SLMM) has also reported 3,535 violations by the LTTE during February 1, 2002 and February 28, 2006, including 1,803 cases of child recruitment, 212 cases of child abduction and 248 cases of harassment. In comparison, the SLMM has determined that the Sri Lanka Security Forces violated the CFA on 169 occasions over the same period.

As is their wont, the outfit has worked continuously to neutralize all non-LTTE Tamil rivals. Since the CFA, it has killed at least 18 prominent Tamil leaders, including Foreign Minister Lakshman Kadirgamar, arguably one of the strongest critics of the LTTE . Crucially, the LTTE has also enhanced its military capability during the CFA, continuing to prepare itself in case of resumption of full hostilities.

During the CFA period, the LTTE, which already had a strong sea force, acquired air power, building an airstrip, with a paved 1250-metre-long runway, near the Iranamadu Tank in the Wanni area. The LTTE is also believed to have acquired two planes similar to the Czech-built Zlin Z-143. Corroborating this, the SLMM chief, Hagrup Haukland, said in Colombo on May 27, 2005, that the LTTE possess an airstrip in the island's north. "We have seen the air strip from the air while flying in a Sri Lankan military helicopter," he disclosed. On January 10, 2006, LTTE 'Eastern Command' leader Bhanu claimed in Muttur that the 'Air Wing' was ready for operations.

Breaching Clause 1.7 of the CFA, the LTTE also continued to acquire and move arms and ammunition. On March 25, 2006, six LTTE cadres and eight sailors were killed when a boat believed to be carrying explosives was blown up by the outfit's cadres aboard the boat, after being approached by a Naval Fast Attack Craft to carry out an inspection in the Kalpititya region, 200 kilometres north of the capital, Colombo. SFs have also recovered a huge cache of arms and ammunition in numerous seizures during this period, pointing to the LTTE's growing weapons build-up.

According to one estimate, approximately 12 ship loads of arms and military equipment were procured by the LTTE during the first two years of the CFA. According to Col (Retd.) R. Hariharan of the Indian Army, "In the past LTTE had used clandestine arms procurement sources in Mozambique and South Africa as well as Thailand and Singapore. From Cambodia, Myanmar and Afghanistan it had procured rapid fire pistols, and assault rifles to rocket propelled grenades and surface to air missiles. Ammunition requirements of weapons including mortars, artillery and 12.7 mm machine guns were met from Bulgaria and the Czech Republic and North Korea while Croatia and Ukraine had been sourced for explosives and related material… it had used the Myanmar island of Twante as a transshipment base for dispatch of arms to Sri Lanka."

The LTTE has also increased its manpower through continuous recruitment, including children, defying international conventions and civilized norms. The then President Chandrika Kumaratunga had said in January 2004 that the LTTE increased its military strength during the truce period, till that point, by recruiting over 11,000 cadres. "The LTTE has increased its cadre by three times from around seven thousand to over 18,000. Quite a few of them are small children and forcible recruitment was going on," she had stated. According to United States Navy reports, the LTTE, as of May 11, 2005, had an estimated strength of 8,000 to 10,000 armed combatants, with a core of 3,000 to 6,000 trained fighters.

In a report on the Tsunami aftermath, the UN had reported that the LTTE were recruiting a new generation of child soldiers from orphans in relief camps. The United Nations Children's Fund (UNICEF), which on February 14, 2006, called on the LTTE to cease recruitment of children for military purposes, had recorded 5,368 cases of child recruitment since January 2002. On March 10, 2006, UNICEF disclosed that the outfit still held at least 1,358 child soldiers, despite its pledges to free all underage combatants.

Despite continuous consolidation, however, the outfit has lost some ground to its breakaway faction led by Vinayagamoorthy Muralitharan alias 'Colonel' Karuna. This is particularly the case in the Batticaloa and Ampara Districts in the Eastern Province. The LTTE has lost 68 cadres in the internecine conflict with the Karuna faction, including some of its top leaders. Those killed include LTTE's political wing leader for Batticaloa town, Senadhi; its Eastern Political wing leader, Kaushalyan, and his deputy Nedimaran. Karuna has, more importantly, made it difficult for the LTTE to function freely in the area between Chenkalladdy and Valaichennai on the Batticaloa coast.

There is evidence that the LTTE is readying itself for hostilities. The Island, quoting intelligence sources, reported on February 27, 2006, that large-scale LTTE war drills were in progress in the Kanjikudichcharu area of Ampara District, almost immediately after the talks between the Government and LTTE concluded in Geneva. Mock attacks on an Army camp, with search operations and an ambush drill were part of the exercise.

The cease-fire agreement has, clearly, failed to bring peace and tranquility. It has unambiguously endangered the unity of the island nation. While a full-scale military conflict remains unlikely at this moment, the LTTE is expected to continue to escalate violence. With a lethality that has been unparalleled in this part of the globe, it is aware it can get away with murder.