Excerpts from Tim Sebastian's BBC HARDtalk interview with the Vice President of the Peoples Democratic Party, that BJP said smacked of 'sedition'. 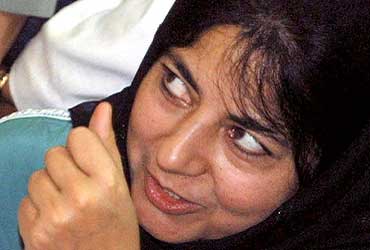 Politics is a very dangerous business in this region. Are you prepared for all the risks?

I have been going through all these risks during the last six years. I have got almost used to it by now.

Within a few hours of your father being sworn in as the new Chief Minister, there was a grenade attack on the building where you and your father live. How did you take that?

I think we have our programme to follow and implement, they have their agenda.

Whosoever led that grenade attack on our house.

There are very powerful forces against you.

Yes, there are, but we are ready to fight.

How do you fight militancy? The chief commander of the militant group Hizbul Mujahideen says the formation of government in Kashmir is not the issue—the issue is self-determination and to achieve that goal we will fight to the last. He is not going to listen to you, is he?

He has an agenda. We have an agenda to address the alienation of the people because that is the basic root cause of the violence in the state.

But the violence, if it continues, will torpedo your agenda, won’t it?

At least we are trying to bring down the level of atrocities, level of violence from one side.

Which side is that?

Our side. We are trying to see that there is more accountability among the various forces, state police who are fighting militancy.

We are trying to see that people get some kind of respite from the friskings going on, the checkings going on because if you look at the face of the country for the common Kashmiri youth, it’s not the same as for the rest of the country.

You are talking about these committed by the Indian security forces?

I am talking about our own police, the state task force.

There has to be accountability among forces fighting militancy because there has been a very good election.

Delhi is not very pleased with what you’ve done so far? You have the BJP trying to undermine you.

I think people of the state who have voted us to power are pleased. That is what matters. I think it goes to BJP’s credit that they had such a good election. Their credibility has gone up.

They didn’t rig it this time?

Yes, that was the freest and fairest of elections since now in J&K. It is in their interest, in the interest of the nation that they should let the government, which has been elected in Kashmir work according to their own programmes.

But they are saying you are soft on terrorists.

It is very unfortunate that there are certain parties or certain people in the Indian government who are trying to make Kashmir a battlefield to win the Gujarat elections. They should not do this because Kashmir is a national issue, it’s not like any other state.

I think it is a very close issue to the nation. Everybody is concerned about it.

Some people in the Indian government are trying to torpedo you, the extremists, Hizbul Mujahideen don’t want to deal with you. Pakistan is against you as well.

That is why we are trying to win our own people. Pakistan, the Indian government in New Delhi, no doubt we do need their help but we want to tell them, give Kashmiri people a chance to live with peace and dignity.

Our message is that if they cannot help us in the situation, at least don’t interfere unnecessarily. There is a very responsible government there in the state of J&K and it would do nothing to jeopardise the security of the people of the state. Whatever they are doing, they are doing in their full senses and we are committed to that programme.

Pakistan is committed to a very different programme...

This isn’t just any neighbour! The problem in Kashmir cannot be sorted out just by you, can it? It has to be sorted out by the key players, India, Pakistan, presumably the Kashmiri people.

We are not one of the key players but we can be the facilitators. After all the Prime Minister has said himself that he is committed that the representatives of this election will have a definite role to play in the resolution of the Kashmir problem.

And what about the separatists?

Whenever there is going to be a dialogue on Kashmir, the representatives of the people of Kashmir should also be involved.

You are going to bring the separatists in?

It is for the government of India to bring them.

They said that they won’t. Since the separatists did not take part in the elections they are not the elected representatives.

If you really want to address the Kashmir problem, then the New Delhi government will have to talk to all shades of opinion. Because talking to the elected representatives only is not going to resolve the problem.

Because if the representatives have not questioned the accession of Kashmir with India. It is the Hurriyat, the Hizbul Mujahideen whosoever you talk about, you need to involve these people.

India says Pakistan can stop the violence. Do you accept that?

Pakistan definitely has a role to play in Kashmir. But we have a problem inside. If we don’t have any combustible material inside, the other person—the neighbour—cannot ignite it. But until we don’t address the internal problem, the role of Pakistan will go on increasing. But there is a role, because even if we reach some kind of agreement with our own people you need Pakistan’s support at some point.

Haven’t you in the course of your election campaign raised expectations too high?

We haven’t made any promises which are out of this world. We don’t want old men to be offloaded from buses and asked to run for miles from one post to another post, we don’t want this crackdown to go on during nights, we don’t want such kind of atrocities.

But there is no way for you as facilitators to break the deadlock. It’s up to Delhi and Islamabad.

We can help in creating the conducive atmosphere for further dialogue, because if you are able to give a healing touch to the situation, definitely there is an atmosphere.

What if you don’t get Delhi to talk to the separatists?

I am confident about our party’s programme and the response we are getting from the common people is very encouraging and inshallah we will succeed.

We have a very definite programme which covers all the three regions of the state. The only thing is that we need is to be given a chance. We have already started on a very good note. It is a matter of time till we are able to restore the confidence of the people of all the three regions.

People are not going to wait that long though.

I think they are not very unreasonable, they have gone through hell for the last 12 years, especially for the last six years... They will give us a reasonable time period at least to prove whether we are serious.

Why are they going to be so tolerant?

Because they have seen the worst. Because we have already started, we have released some political prisoners.

A gesture rejected by the separatists already even thought some of them were let go.

We have not done that just for the sake of separatists.

What should the West and the international community do? India says that the West has forfeited the moral right to advise on Kashmir.

The West could do one thing. They could help us because help is not coming from anywhere.

And yet you have huge sums of money coming to the state—drug money, hawala money. Property has quadrupled here in the last 10 years. Money is coming into the place—unusual for a war zone, isn’t it?

Yes, but it is going to very few pockets. It’s not going to the public, the people in general are suffering, we have thousands of widows and thousands of orphans. But nobody has bothered, we have not heard from the international community who have done a commendable job in other parts of the world.

But they were told to get lost by the Indian Government. Kofi Annan, who offered to mediate from the UN, was told his advice wasn’t needed.

Britain and America were told in no uncertain terms that their advice wasn’t needed.

Nobody is going to stop an NGO from coming and giving us help in Kashmir.

You seem to think it’s going to be easy. You think with a little largesse, telling the security services to behave a bit better, telling everybody that the situation is going to get better, that you can simply stop this conflict.

I am talking about a healing touch which has been missing for the last 12 years.

How much of a breeding ground for terrorists is this going to be? There are reports that Al Qaeda terrorists are coming, that Maoist Nepalese are coming. Is that true?

The people of Kashmir are very peace loving. They have always been deadly against violence but the situation gave way to certain forces that have forced Kashmiris to take to violence.

You are justifying violence.

That is exactly what you are doing.

The problem is nobody wants to become violent.

You are seeking to understand the violence, which is just a step away from justifying it.

If you really want to get rid of violence you have to get to the root of the violence and that root is the alienation of the people. The more we fight that violence the more atrocities take place during the course of that and more alienation takes place.

Where are the choices when the security of the state is at stake? Look at the position from India’s point of view. It says one of its states within the union is being threatened by terrorists. That’s true and it is entitled to respond in self defence.

I think for the last six years the state government and the Government of India have done everything, all kinds of harsh measures they have taken, hot pursuit, pro active policy, POTA. They have left no stone unturned to control violence here.

But what is the result? The violence has spread to other parts of the state. But our government wants to go for pro-people measures, giving it a human face. We are ready to take this risk.