DMK To Hold Meet To Condole Karunanidhi's Death, Stalin Likely To Be Promoted As Party President 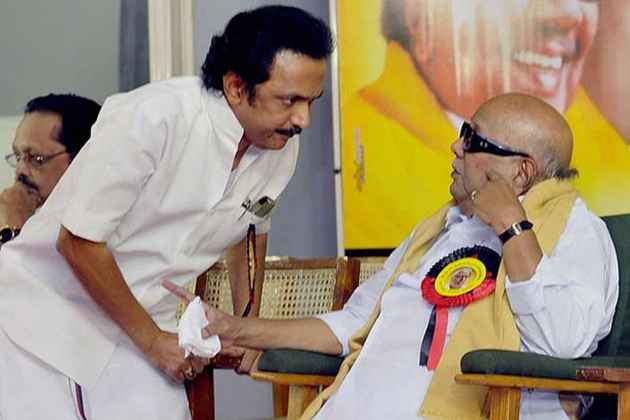 The DMK on Friday said a meeting of its executive committee will be held on August 14 to condole the death of party president M Karunanidhi.

All members of the committee have been asked to participate in the meeting without fail. It will begin at 10 am at the party headquarters, Anna Arivalayam.

The meeting's agenda is to condole the death of Karunanidhi, a release issued by party general secretary K Anbazhagan said.

A similar meeting was held when party founder and former chief minister C N Annadurai passed away in 1969, a party leader said.

DMK working president M K Stalin later told reporters that the executive committee meeting was only to condole the passing away of Karunanidhi, his father.

He had earlier held a meeting with party general secretary K Anbazhagan.

A party leader said the executive meeting might consider a date for holding the general council meet, which is likely to elevate Stalin as the DMK President.

In a statement, he urged Prime Minister Narendra Modi to honour the departed leader in view of services to the people as a five-time chief minister and contribution to the Indian polity.

Earlier in the day, DMK Rajya Sabha member Tiruchi Siva made the demand in the Upper House.