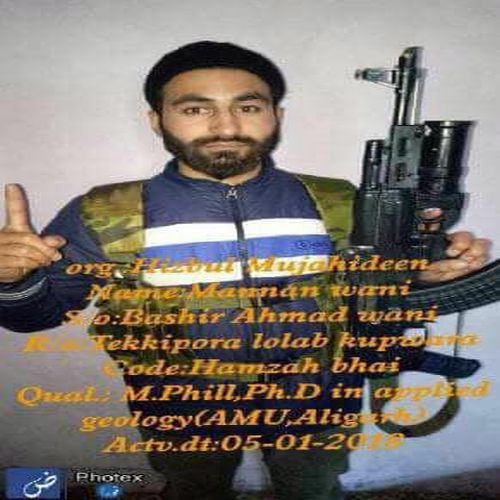 J&K’s Kupwara resident Mannan Wani, who was pursuing his PhD in applied geology at Aligarh Muslim University (AMU), has claimed to have joined militant group Hizbul Mujahideen,
A photograph of him holding an under barrel grenade launcher was posted on Facebook with a message claiming that he has joined the militancy on January 5, first reported by The Indian Express.
“We have also seen the picture on social networking sites. But we have no idea (whether he has joined militants or not). We lost contact with him on January 4 as his phone was switched off. We thought he had switched it off for some reason or lost it. As we couldn’t contact him, we lodged a missing report with police on Saturday,” Wani’s brother, Mubashir Ahmad, a junior engineer, told the newspaper.
The university’s official website states that Wani, 26, was pursuing a PhD on “Structural and Geo-Morphological Study of Lolab Valley, Kashmir”.
According to the website, he received an award for the best paper presented at an international conference on ‘Water, Environment, Ecology and Society’ in 2016, added the newspaper.
The J&K police are yet to confirm Wani's whereabouts and whether he has joined the militant group.
According to NDTV, it transpired that Mannan Wani had left AMU a few days back and reached Delhi. He was said to be on his way home in Kupwara district's Lolab Valley where his family lives. He should have been home three days back.
Last year, The Indian Express reported that from a 15-year-old school student to graduates, post-graduates, techies, an M Phil degree holder and even a doctorate had joined militancy ranks in the Valley, fuelled by the life and death of Hizbul commander Burhan Wani.
According to data compiled by security agencies, 67 local recruits have joined the militancy in the Valley since Wani’s killing in an encounter last July. What’s striking is the educational profile of these recruits. Apart from a PhD, an M Phil and two post-graduates, there are six graduates and five who were pursuing engineering and technical courses: two B Tech, one BE (Computer Science), one Polytechnic student and one diploma student in computer science.
In November last year, Anantnag's 20-year-old promising footballer Majid Khan, who had joined militant group Lashkar-e-Taiba, surrendered before the security forces Khan was a good athlete and has always excelled in sports. He won several medals playing for local football and cricket club, Hayat sports. Khan, a student of B.Com second year, was also working with a humanitarian organisation as a volunteer and emergency head.
He was a renowned footballer of the town and had passed class 10 and 12 board examinations with high scores.
Recently, one of the two Jaish-e-Mohammed (JeM) militants killed in the attack on a CRPF training camp in Awantipora on Sunday was 16-year-old Fardeen Ahmad Khanday, son of police constable Ghulam Mohammad Khandey reportedly posted in Srinagar in the J&K police.
Khanday was a Class 10 student and became a militant three months ago.