Did India Lose The Toss Against Sri Lanka In Last Match? A Mistake That Went Unnoticed

Pycroft's body language showed his disappointment after Kartik's reply. But it is still unclear whether Kartik misheard Pycroft or it was the referee who misheard Kohli during the toss. 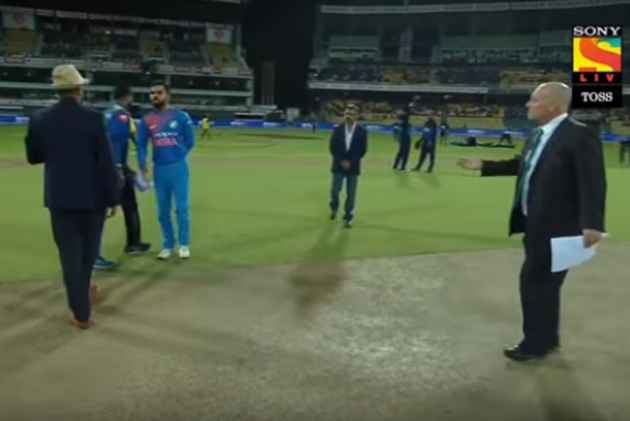 Skipper Virat Kohli's blistering innings ensured a comfortable seven-wicket win in the lone Twenty20 game as the visitors completed a 9-0 clean sweep against Sri Lanka on Wednesday, but a mistake during the toss went completely unnoticed.

After Sri Lankan captain Upul Tharanga tossed the coin, Kohli called it a "heads". Subsequently, Match referee Andy Pycroft seems to be saying "tails, India" in the video after looking at the coin. But the official presenter Murali Kartik replies by saying "heads it is "and goes on to chat with Kohli.

Pycroft's body language showed his disappointment after Kartik's reply. But it is still unclear whether Kartik misheard Pycroft or it was the referee who misheard Kohli during the toss.

It was the first time that an Indian cricket team registered an all-win record across formats in an overseas tour.

Chasing a competitive 171 for the win, Kohli led from the front with a fluent 82 off 54 deliveries while Manish Pandey played the second fiddle by remaining unbeaten on a career- best 51 to guide India home comfortably with four balls to spare.

For India, young leg-spinner Yuzvendra Chahal was the pick of the bowlers with figures of three for 43 from his four overs, while chinaman Kuldeep Yadav scalped two for 20.