Delhi Was, Delhi Is

It was a Delhi of rides aboard DTC's route 220 to get to St Stephen's for an early morning 'tute', of being the 'second batch of girls' and deliciously outnumbered by boys, gorgeous boys. 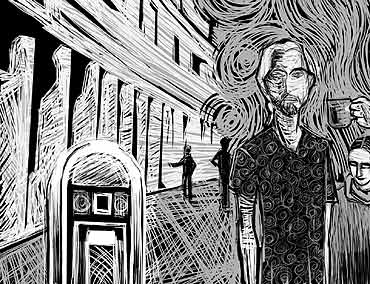 My ‘slaad’ days in the 60s and 70s centred around Curzon Road—today’s K.G. Marg—and a five-mile radius around it, the venue of many firsts.

Delhi’s first takeaway: an Electric Lane eatery, from where a surly idli-man with crooked teeth and thick soda glasses worked the length of Curzon Road door-to-door, sloshing sambhar out of a Brite plastic bucket like a farmer does pigswill.

The summer’s first amaltas on Atul Grove Lane—connecting Curzon to Janpath—which splashed their golden shower before any others in the city, even as searing winds whipped up mini tornadoes of dust and yellow petals along phantasmagoric tar.

And our first bug-eyed sight of voyagers: large overland buses from London pulled up just where Palika Bazaar pocks CP like an ingrown carbuncle today. Filled with longing, we’d stare at the psychedelic peace signs and route maps on their sides. Across the street, BOAC and Quantas beckoned and twinkled but stayed expensively out of reach.

The chrome-and-steel jukebox at Standard Restaurant was as decadent as its peach melba, and Kake da Hotel was the original home of Delhi’s feathered mascot, the tandoori chicken.

It was a Delhi of rides aboard DTC’s route 220 to get to St Stephen’s for an early morning ‘tute’, of being the ‘second batch of girls’ and deliciously outnumbered by boys, gorgeous boys.

It was a Delhi of great dance floors—the Cellar at Regal, Tabela at the then Oberoi Intercontinental or Wheels at the Ambassador. And it was a Delhi of canny enterprise: Jean Junction ensured we didn’t have to wrangle for denim, Dateline Delhi, the city’s first thinking-man tabloid, gave us summer jobs and stories.

In the brief misty monsoon, the pavements steamed over with the ripe smell of neem fruit crushed by our platform heels. A few weeks later they’d be replaced by jamun, whose colour purple dyed the earth.

Delhi is where the dreaded chocolate barfi was born, this is where Band on The Run played repeatedly in the Chanakya lobby while you waited for Abba The Movie to begin. This is where Salma Sultan dimpled her way through the country’s first black and white telecast, this is where Coca Cola died and prohibition saw us sip beer out of Chinese teacups.

But as some French dude put it: the more things change, the more they remain the same.

Portly sarkari employees in bright hand-knit sweaters and woolly caps ending in a baby frill around their napes, still crack peanuts and soak up the winter sun at traffic roundabouts on taxpayers’ time. The musty smell of winter sleep still pervades taxis, odes to Sunny, Bunny and Happy still adorn three-wheelers and the Meena community still benefits from job reservations in Delhi Police.

George has long vanished from under his canopy at India Gate, Wellesley and several others morphed into Mughal emperors and Rattendon underwent a sex change.

But it’s still my Delhi—at least, till some zealous do-gooder changes its name. Kukkadprastha, anyone?