With continued stubble burning in parts of Punjab and Haryana, a thick blanket of fog has engulfed Delhi and the national capital region (NCR), with air quality dipping to 'Hazardous' category. 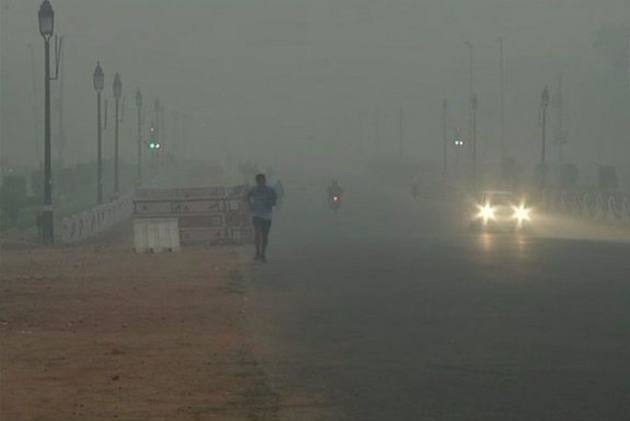 The citizens of Delhi on Monday woke up to the first dense smog of the season with the air quality in many areas ranging from poor to hazardous.

An official with the Centre-run System of Air Quality Forecasting and Research (SAFAR) said despite moderate wind speed, the pollution in Delhi rose due to stubble burning from the neighbouring states.

Breathing Delhi’s Air Is As Bad As Smoking 20 Cigarettes A Day: Doctors

"As expected there is a significant intrusion of bio-mass generated pollution in Delhi which is increasing pollution levels and made it very poor in spite of moderate surface wind speed," he said.

"The contribution of stubble burning to pollution in the national capital is expected to be 24 per cent on Monday," another official said.

On Sunday, a total fine of Rs 83,55,000 was imposed on violators by the teams deployed to monitor implementation of measures to combat pollution in the Delhi NCR under the campaign.

On Friday, the AQI was 370, which came down to 336 on Saturday, according to the CPCB. It has been found that PM 2.5 emission reduced "from 432 ton per day to 370 ton per day to reproduce the observed level with realistic met parameters, a decline in base emission by 14 per cent in Delhi and nearby domain", the official said.

PM 2.5 are particles in the air with a diameter of fewer than 2.5 micrometres.

The SAFAR also said there is a large possibility of an increase in moisture from Monday evening, which might lead to an increase in the pollution level.

"The AQI is predicted to be in the lower range of very poor Monday as the atmosphere is relatively clean," the official said.

The Indian Institute of Tropical Meteorology (IITM) said fire counts in the northwest region of India were significantly less on Saturday as compared to Thursday but warned of a sharp increase in PM2.5 concentration from Monday.

"If significant stubble burning continues on Sunday and Monday in the NW (northwest) region of India then its impact is very likely over Delhi and AQI may reach the upper end of the very poor category.

"The northwest wind direction may bring the influence of biomass fire on Tuesday and Wednesday," the IITM said.

Delhi authorities have stepped up efforts to combat pollution which includes measures like halting construction activities and regulating traffic.

There is a halt on all construction activities involving excavation. Civil construction has also been suspended in Delhi and other NCR districts, besides closure of all stone crushers and hot mix plants generating dust pollution.

The Delhi Pollution Control Committee (DPCC) has also directed the Transport Department and the Traffic Police to intensify checking of polluting vehicles and control travel congestion in the region during November 1-10.

An aggressive 10-day-long 'Clean Air Campaign' from November 1 to 10 has also been launched to monitor and report polluting activities as well as to ensure quick action.

It said a total of 119 complaints of construction and demolition activities were received.

It said a total of 52 complaints were received through social media and e-mail while 316 complaints through the 'Sameer app' that has been developed by the CPCB.

On Friday and Saturday, a total penalty of Rs 80 lakh was imposed on violators.

The teams are visiting different parts of Delhi and adjacent towns of Faridabad, Gurgaon, Ghaziabad and Noida.

Delhiites welcomed the improvement in the air quality which has been severe for the last three weeks.

"I have sent my children to play outside after weeks. I hope the air quality finally improves and we see a clean Diwali," said Sarita Mathur, a Mayur Vihar resident.

Another resident, Ritu Kumar, said she has gone on a walk for the first time this month due to improved air quality.

D Saha, former additional director and head of air quality management division at the CPCB, said, "No drastic change in pollution level is anticipated as the ground level emissions are under control due to various administrative and regulatory measures, and we are likely to have a clean Diwali."